Home Books Five Books You Need to Read This November 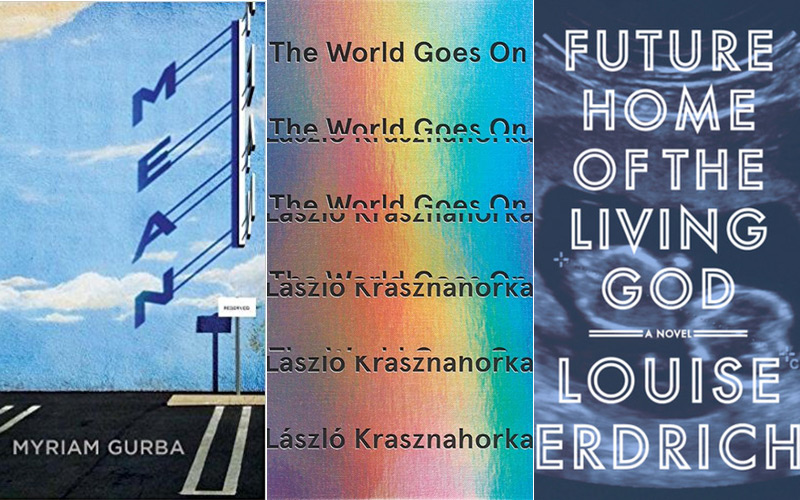 Making subjects like sexual assault, eating disorders, and misogyny funny and relatable is a tricky task, but Myriam Gurba has cracked the code. The artist and spoken-word poet’s new memoir, Mean, which recounts her life growing up as a queer Chicana in ’80s SoCal, is one of those rare books that’s both refreshingly experimental and totally approachable. With a deft hand and unflinching honesty, Gurba loosely knits together vignettes from her youth into a humorous and moving reflection on identity, privilege, and sex. Read an excerpt from what’s sure to be the breakout memoir of the season here, and fall in love. 2. Future Home of the Living God by Louise Erdrich
November 14

“Our world is running backward. Or forward. Or maybe sideways,” writes Cedar Hawk Songmaker, the 26-year-old narrator of this apocalyptic tale from The Round House author Louise Erdrich. Pregnant and on the run from the authoritarian Christian government of future America, Cedar lives in a world where evolution has inexplicably reversed itself, plants and animals are returning to their prehistoric states, and babies are being born as ancient species of humans. As she flees a robotic, all-seeing government figure called Mother (under suspicion that her womb contains a rare “normal” fetus), we watch her navigate both the world of her white liberal upbringing and the Ojibwe tribe she was born in while struggling to protect her unborn child and herself. 3. The World Goes On by László Krasznahorkai
November 28

Reading László Krasznahorkai can be pretty intense. Best known for his debut novel, Sátántangó, a surreal tale of Hungarian political decay that was adapted into a seven-hour (!) film by director Béla Tarr, the doom-laden, existential webs this author weaves with his words inspired Susan Sontag to deem him “the contemporary Hungarian master of apocalypse.” It’s a title that he more than lives up to in The World Goes On, a philosophically-charged new collection of stories about characters that are being pushed (figuratively or literally) to the edges of the world. As you wade through the weighty but worthwhile prose between the book’s holographic covers, you’ll get to know Russian cosmonauts, a waterfall-obsessed interpreter in Shanghai teetering on the edge of sanity, and a Portuguese child laborer who escapes his toils by wandering into an alternate reality. A love affair with a 6-foot-7-inch amphibian might not be every woman’s fantasy, but for Dorothy—the lonely housewife at the center of this soon-to-be-reissued 1982 novel—it’s working out just fine. Bored with her morose husband and bereaved by the deaths of her young son, her unborn baby, and her dog, she has taken up with Larry, a monster who recently broke out of the Institute for Oceanographic Research, and who also happens to be a total hunk. If the plot sounds kind of familiar, you might be thinking of The Shape of Water, Guillermo Del Toro’s forthcoming flick that basically tells the same story (so far, Del Toro hasn’t mentioned Ingalls’ book as inspiration for his film.) Either way, this is a short, funny, bizarre novel that’s worth your time. How do we balance individual and collective happiness? Lynne Segal, Psychology and Gender Studies professor at Birkbeck College, takes a crack at untangling this complex query in her new book. Drawing on sources from psychology, sociology, and economics, it’s a dense but surprisingly readable treatise on the revolutionary potential of community.