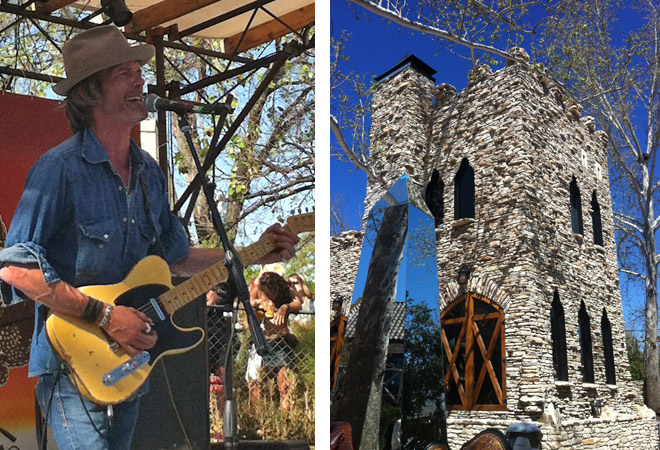 The best advice for anyone going to SXSW is simple: Embrace the chaos and you’ll stumble on magic. You’re immersed in music the moment you land in Austin. There are bands in parking lots, fried chicken restaurants and empty fields. SXSW organizers probably don’t want to hear it, but at every turn you have a chance to see concerts that are free that don’t require a wristband. You don’t even have to leave your house—the live coverage from KUTX 98.9 is that good. But I did leave the house, and here were my favorite moments.

Americana Day
Both The Grand Ole Echo (the weekly summertime country music night held here at the Echo), and New West Records, a premier Americana label, hosted terrific day parties. Ronee Blakley, John Byrd, and The Carper Family rocked the GOE party while Daniel Romano, Corb Lund, John Hiatt, Buddy Miller & Jim Lauderdale, Max Gomez, and Richard Thompson held court at New West. Both were respites where you could grab some barbecue and relax before running around to showcases in the evening.

Discovering A Rare Gem
From a distance the soulful, distinctive voice singing gospel and folk sounded like an older black woman. When I got closer I discovered it belonged to a young white kid, Christopher Denny, a 23-year old from Little Rock, Arkansas. My entire group stopped chatting and moved front and center to find out who he was. He also had Lauren Gurgiolo from Austin indie folk band Okervil River on guitar, and that little girl can wail.

(Later that day: Bajofondo, Café Tacuba, Sharon Jones and the Dap Kings, Thao and the Get Down Stay Down, Computer Magic, and one of the buzz bands of the weekend: Alt-J.)

Hearing Patty Griffin In A Church
New West Records hosted a lunch where Griffin performed a few songs from her upcoming album (her first with the label), American Kids. In the courtyard of a turreted house, originally built in 1925 as a mission-style church, music biz hipsters lunched on barbecue from Lamberts then moved inside and listened to songs “conceived on the highways between Austin and Nashville.” Especially funny was “Get Ready Marie,” about the way her grandfather looked at her grandmother in their wedding photo — like he couldn’t wait to get his hands on her. Wearing a patterned dress and boots, stomping her foot as she played her acoustic guitar, Griffin was nervous and sweet, wrapping up by saying, “I hope you have a good weekend and don’t get run over. And don’t run anybody over even though you may want to. I’ll see you again.” Yes you will, Patty.

The Kids Are Allright
Florida’s Surfer Blood are so young the drummer’s T-shirt said “Class of 2014,” but their rocking riffs and simple themes remind me why I fell in love with music in the first place. Jake Bugg is a 19-year-old who hails from the UK and channels Hank Williams, Bob Dylan, and Oasis with surprising confidence and great pop songs.

Sunday Afternoon at the Continental Club
Sitting at the bar on the festival’s last afternoon, the light from the back door was broken by a figure who walked in wearing a snakeskin jacket, silk scarf, skinny black jeans, and pointy dark red shoes. Alejandro Escovedo, one of the godfathers of Austin music, who played all over the festival and always closes it out on Sunday, entered the club and my SXSW weekend was complete.
(Also that day: The Mastersons, and John Velghe.)

Sorry I Missed
Foxygen — Apparently the singer had a Billie Armstrong-strong meltdown at a performance and walked off the stage. The Foxygen show I raced to the next day was cancelled. No matter, it’s Austin. Just call in Charlie Sexton and David Garza for an amazing fill-in set.

Kinda Wish I’d Missed
Gus+Scout — Made up of Gus Wenner, son of Rolling Stone founder Jann Wenner, and Scout Willis, daughter of Bruce and Demi, their bluesy set was good but her folks should invest in a vocal coach. She’s got pipes that she has no idea how to use.

Moment I Felt Old
At a party where the band was tuning up, the lead singer stood at the microphone ready to perform and instead of saying, “More guitar in my monitor,” she said: “Could you hit the space bar, please?”