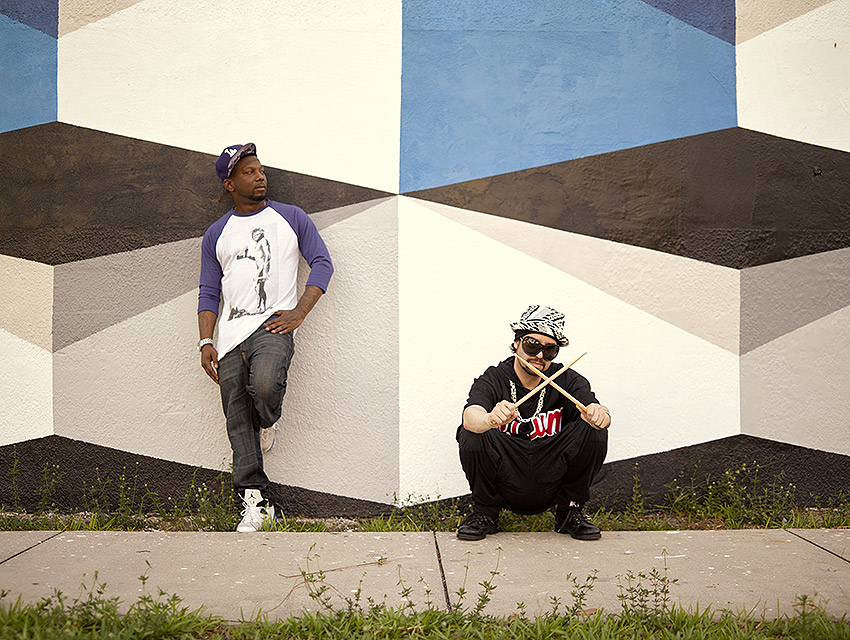 Semi Hendrix is a glorious oxymoron: The L.A.-bred duo, a byproduct of the partnership between famed West Coast emcee Ras Kass and Grammy-winning producer Jack Splash (Kendrick Lamar, Mayer Hawthorne, John Legend) is political meets street. It’s graffiti meets classic. It’s an amalgam of hip-hop, funk, soul, and hardcore. Kass and Splash set real issues like racism, sexism, and poverty to music, and their debut album, Breakfast At Banksy’s [see: graffiti meets classic] is a triumph. Out October 16, the record features collaborations with Cee-Lo, Raheem DeVaughn, Teedra Moses, Kurupt, and others (get an exclusive sneak peek at the song M.A.S.H ft. Kurupt below). We sat down with Semi Hendrix ahead of the album’s release to talk about the ways in which L.A. has shaped their work, where their name came from, and why a little rebellion can be a good thing.

How did you guys meet?
Jack Splash: It’s funny, actually. I was in L.A., out at I don’t remember what restaurant or bar. I live in Miami now, but I grew up in L.A. And I could have sworn that I saw the god Ras Kass. And the O.G. fan in me…I had never met him before. I didn’t really want to bug him, but I’m like ‘You know what, fuck this.’ And I went up and was like, “Yo. I don’t want to interrupt you…” I think there was a girl talking to him or something. I definitely didn’t want to interrupt him talking to a girl, but I said, “I’m a huge fan of yours. I just wanted to let you know. “ And he was super cool. “Oh really? What’s your name?” Ras asked. “I said my name is Jack Splash.” And before I could get out the rest of what I was going to say he was like “That’s crazy! I’ve been meaning to link up with you.” And we were basically like, “We’re going to make music.”

Ras Kass: Yeah. That’s exactly what happened. It was at a Brazilian restaurant. And he came up and I totally knew who he was, and I’m like, “Yo, dude!” And from there we exchanged numbers. Sometimes you don’t really put a face with a name. You know the music, you know the reputation…I knew who Jack was. I was a fan, too.

Jack Splash: That’s what I love about Ras. No matter how legendary he is or how much people put him up on a pedestal, he’s like, “Come on, man. When you see me, say ‘what’s up!’ ”

How do your styles complement each other? How do they clash?
RK: They definitely do both. I think that’s kind of the beauty of it. We were initially going to call ourselves “Oxymorons,” which encompasses that question. I think it’s partly because we love hip-hop, but musically, we are all over the place. Like, I love Duran Duran, you know? I have a lot of different genres that I really enjoy, and I think Jack is the same way. And those things mesh in a weird way. He may want to go into something a lot more funk, and it challenges me to complement it. So we kind of go back and forth with concepts, directions, production. He’s the Dr. Dre to my Snoop or Kendrick. I think we’ve made something that is really avant-garde, but it’s still easy listening. And the majority of that is thanks to Jack. Sonically, it goes a lot of different places, but it’s still consistent. It has a great feel to it. And I think instrumentally, you can enjoy all the different directions that just one song can go.

JS: To me, the true essence of hip-hop was that clash Ras is talking about. Not the bullshit radio songs and horrible shit that gets passed off as hip-hop, but the true essence of what hip-hop was and still is. There’s tons of incredible hip-hop now. You just got to dig for it. You have to be open-minded, and you have to step outside of your comfort zone. If you’re not being experimental, and you’re not trying shit, then how is it going to be exciting or experimental for the listener to listen to?

Have your differences ever caused any issues or rifts between you two?
JS: We’ve argued over songs, but that’s what a good group does. We’re both pretty humble.

RK: I don’t take things personally when there’s a difference in vision. Being in different in rap groups, I would get outvoted sometimes about a beat, but I wasn’t going to pick my ball up and go home. As long as you don’t take it personal and you keep it respectful, I think that it’s healthy.

How did you guys come up with the name Semi Hendrix?
JS: I’m super weird and meticulous about the projects that I work on. We started our project a long time ago, and like Ras mentioned earlier, we came up with the name “Oxymorons.” That was our perfect theme. And that was around the time I worked on Kendrick [Lamar]’s first album. So we made a bunch of songs and we were shouting out “Oxymorons” in the songs, you know? People can kinda go back now and trip out. We took out most of them, but one or two subliminals might be in there. But then Schoolboy Q titled his album Oxymoron. So we had to come up with a new name. I kind of left that up to Ras because he’s more maniacal with the wordplay. Semi Hendrix fits us pretty well because we might not be saying “Oxymorons,” but I think it encompasses that. Even though our music is 100% hip-hop, it’s totally genre-less when you hear the full album—there’s so many elements in it, from funk to jazz to soul to rock to some weird electronic elements going on in certain songs. I think Hendrix himself, in his own way, helped redefine what “rock” was, and I think we’re redefining the possibilities of what you might be able to do within “hip-hop.”

How has growing up in Los Angeles shaped your perceptions of music?
RK: I’m a first generation Californian, and I don’t really come from a musical background. So I started to take an interest in rap, and that led to an appreciation. So liking a Pete Rock song, or “Walk This Way” by Run D.M.C—I was late to these songs, but doing the research because I wanted to emulate those things helped me to understand “Oh, this is a rock record.” Or “Oh, this is jazz.” And then I started understanding George Clinton’s influence on Dr. Dre and The Chronic. My entire musical experience is really predicated upon my appreciation. To hear DJ Quik or “Fuck The Police,” that shit took me somewhere else because that’s what I had to go through everyday. So for me being from L.A. created my foundation of any kind of music appreciation.

JS: I had almost the exact same experience of discovering every other genre or form of music through hip-hop. I didn’t like anything but hip-hop. I’d hear things, but nothing grabbed me. The art form of rap has way more respect now than it ever did. And everything is different now with the younger rock artists or the younger jazz or the younger funk artists, where they all know and they love hip-hop and they incorporate hip-hop into what they’re doing. But in the earlier days, it might have been those same rock groups or those same jazz groups or those same funk groups that were shitting all over hip-hop. But a few years ago when Rick Rubin flew me out to L.A. to talk about signing me, I told him “I hated fucking rock music growing up, and one of the reasons I love you so much is not only did you do all the most classic hip-hop shit, but when you did make rock music, you made it in a way that I understood it.” Like, I fucking loved the Chili Peppers. When you talk about L.A., for me, I grew up on N.W.A and Chili Peppers. And I didn’t understand til much, much later that Anthony Keidis was actually rapping. From his perspective, he was rapping. That was just his style. It took me leaving L.A. to realize how unique and one-of-a-kind it is. Around the same time, No Doubt, Chili Peppers, and N.WA. all came on the scene. One’s kind of doing funk rock, one’s kind of doing ska, and one’s kind of redefining hip-hop. And none of them gave a fuck about what anyone anywhere else in the world was doing. That’s something that L.A. encompasses at its very best. Like, everyone can praise Kendrick’s new album, which they should because it’s incredible, but in my opinion, it’s just a continuation of that same attitude of N.W.A, Red Hot Chili Peppers, when Ras made Nature Of The Threat…to me, that’s what L.A. is. L.A. has that rebellious spirit.

How does that rebellious spirit play out on Breakfast At Banksy’s?
RK: There are some controversial titles on this record. It’s sociopolitical. It’s heartfelt. We deal with record label-artist abuse. The easy things to talk about in rap are “I pop a lot of Mollys” and “I drive a lot of cars.” I know the things to say: I’m rollin’ in my Bentley, and I’m still trappin’. And I’m poppin’ a lot of bottles. That’s the easy way to play the game. I’m not adverse to all those things. I like women and I drink liquor. I just don’t want to only talk about that. The balance and the rebellious spirit is to say, “That’s not all I do,” and, “I’m not going to make 12 songs of that shit.” So having a record that talks about sociopolitical shit or about how silly it is to make those kinds of songs consistently. The rebellious spirit is about being true to yourself.