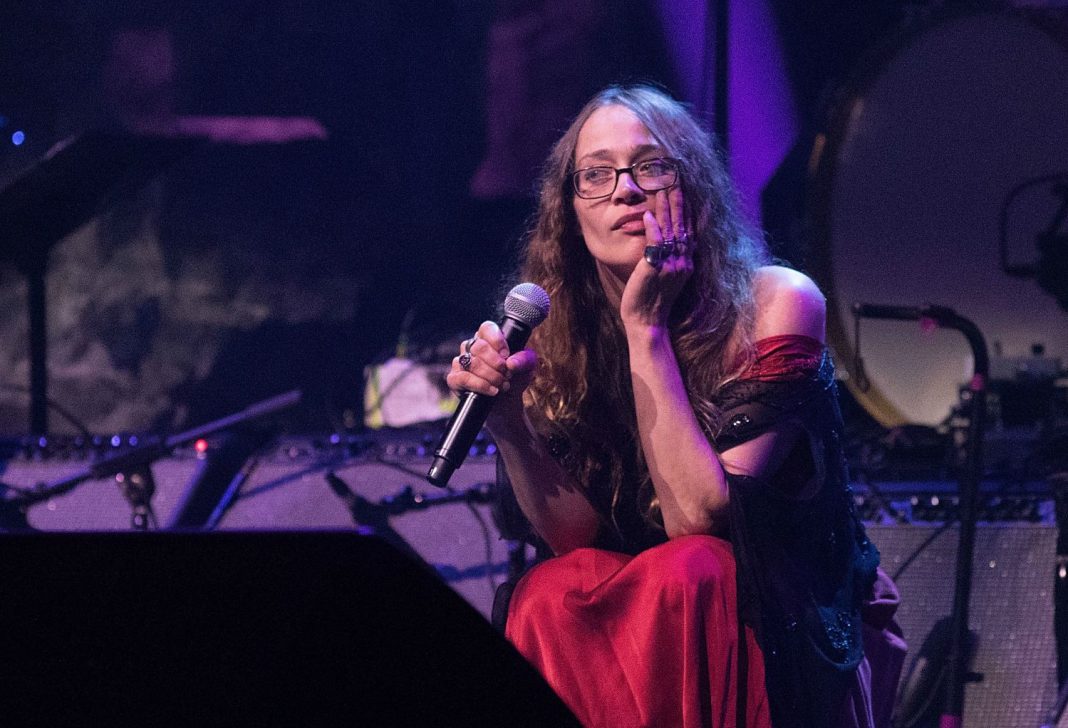 There was nothing but bad news, until it was announced that Fiona Apple, who was going to release her long-awaited fifth album in October, decided to release it now. Like, right now. Talk about a captive audience. For eight years, Apple kept us hanging. During that time, she got busted for possession of hash in a Texas border town, stopped looking alarmingly thin, and kicked the booze. She had some break ups and make ups and decided that she’s good with being single for now. At home in Venice Beach with her pets and GarageBand, she recorded Fetch the Bolt Cutters. And now comes a crueller than cruellest April, as T.S. Eliot might say. Everyone feels trapped, frustrated, angry, edgy. We are ticking time bombs. We yearn to be released, but there is nowhere to go. We are all Fiona Apple now.

In an abnormal time it’s fitting that these new songs are not normal. They don’t have conventional verse-chorus-verse structure. They change speed, meter, rhyme schemes, moods. But the voice that guides you through is familiar. All those years of hash smoking have not made a palpable dent in the already smoky contralto Apple had at 19 when, in her most conventional pop song, she sang, “I’ve been a bad, bad girl.” That was a good, good song for a teenager—it would be good at any age. That was around the time she appeared on the VMAs, looking like she had emerged from a Renaissance painting, and said, correctly, “This world is bullshit.”

In the years that followed, she kept stretching, until she got someplace no one ever got before. Ask any Fiona Apple fan and many would tell you their fave is “I Know,” from her second album with a title so long, it’s in the Guinness Book of World Records. It’s a devastating song about waiting for a lover to make up his goddamned mind. “So be it I’m your crowbar / If that’s what I am so far/ Until you get out of this mess.” Stand your ground, Fiona! But wait—there’s this, with vibrato that soars and simmers: “And you can use my skin / To bury secrets in.” With a melody that could have come straight out the Great American Songbook, and a couplet that stunning, it doesn’t get any better. On “Fast as You Can,” she sang, “My pretty mouth will form the phrases that will disprove your faith in man.” You had me at “bury secrets in.” Who said anything about faith in man?

Her voice is pretty much the same now, but if the ‘90s could hear Fetch the Bolt Cutters, they would be shocked. They would think the world was in some kind of crisis—and they would have no idea. Now she is using our skin to bury secrets in. This could be TMI, but it’s not, and least not for those who can handle the truth. Everywhere she goes, she is breaking another taboo and freaking us out.

“Maybe I’m sick, but I want to see that again.” Film critic Pauline Kael overheard someone say that at a 1986 screening of David Lynch’s Blue Velvet, and that is where we find ourselves during this record, where the delicate moments make you cry and the most violent moments make you say, in the Kendrick Lamar sense, “Damn!” I’m talking about being about two minutes into a song called “For Her.” The song keeps changing its mind about itself. First, it sounds like a schoolyard taunt, but not like any schoolyard on this planet. It’s more like the Andrews Sisters in a video for Beyoncé’s Lemonade:

“You arrive and drive by like a sauced-up bat /
Like you know you should know, but you don’t know where it’s at.”

It’s clear we’re on the side of the taunters, especially when the song stops and begins again with: “Good morning / You raped me in the same bed your daughter was born in.” She was inspired by the Brett Kavanaugh hearings, and it was no time for “Wake Up Little Susie”—it was time to be furious and be real. Apple was raped at 12, but says she’s just begun to deal with it. Kavanaugh is now on the Supreme Court, and the world is sinking.

This album was made before our current crisis, and “Heavy Balloon,” a hymn to her noonday demon, her clinical depression, sounds like as much of a conventional pop song as one could imagine from the mind behind “Criminal” or “On the Bound.” But she hits those beats to tell us that she can’t hold it in anymore. “I’ve been sucking it in so long,” she growls, “That I’m busting at the seams.” This heavy balloon is cumbersome, even when we’re not in the midst of a global pandemic.

Fetch the Bolt Cutters is not an album that wants you to like it, not really. “I want you to love me,” she sings on the opening track, but the song goes around in circles. She told Vulture it started out as a song to novelist Jonathan Ames, but then they broke up and the song became about something else, like looking for a love that you can’t really find from anyone. The song, which features her homemade chromatic harmony on piano, devolves into a sound that might be only intelligible to seals.

Apple tried to warn us all those years ago that the world is “bullshit.” She didn’t want teenagers—or any non-celebrities—to feel insecure. That woman is now quarantined like the rest of us at her Venice property. She has her dogs, her friends, and we assume she’s keeping her social distance. She doesn’t have to be anything other than exactly who she wants to be. And we, hungry for her music, hungry for any meaningful diversion, want that, too. The original Venice was scheduled to fall into the sea a while ago, and now the outlook for much of the picturesque California coast is pretty grim. These days, everyone is looking at everyone else’s social media with envy, even as their spiritual advisors tell them this way madness lies. But now we have to look around, take stock of what we have, and try to get through another day. You moved here to go to the beach, and now the beaches are closed. You moved here for the weather, but you can barely go outside. Everything is on hold. We search for answers, but those are on hold, too.

Over 40 years ago, Joan Didion wrote, “California is a place in which a boom mentality and a sense of Chekhovian loss meet in uneasy suspension; in which the mind is troubled by some buried but ineradicable suspicion that things better work here, because here, beneath the immense bleached sky, is where we run out of continent.” Here we are, running out of continent. And here is our soundtrack. The end has been nigh for a long time, but now we have to get real. Fiona Apple, as a 19-year-old Cassandra, told us the world is bullshit. What an innocent time. Now it’s April 2020, and Apple wants to give us a message. We are stuck. She can’t solve our problems, but she can commiserate:

David Yaffe is a professor of humanities at Syracuse. He is the author, most recently, of Reckless Daughter: A Portrait of Joni Mitchell (FSG).