Home Uncategorized Finally, High School Like You Remember It 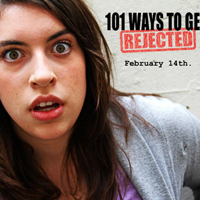 The lack of accurate portrayals of the high school experience on TV and the big screen is by no means a new dilemma, but how many of us ever did anything about it?

Canadian-born Susie Yankou, an 18-year-old sophomore enrolled at USC’s School of Cinematic Arts, is filling the void while putting her production skills to good use with a new web series, 101 Ways To Get Rejected.

“This is obviously an exaggerated version of my high school experience,” Yankou says, “but I feel like the people who went below the radar aren’t really covered on TV, and I thought this would be a great way to get across my sort of weird sense of humor.”

The pilot episode was released on Valentine’s Day — fitting, given its focus on hallway heartbreak. The show’s protagonist, Sam (Yankou), takes the daring step most of us still regret not pursuing: asking her crush to prom. Considering the show’s title, it should come as little surprise that her grand gesture doesn’t go over so well.

Yankou and her small crew shot the first episode in a single day last summer, while the rest of her classmates went home for break. Aimless lounging doesn’t seem to fit into the young writer’s plan. “I’m big on creating my own opportunities,” Yankou says, “and the thought of waiting around for something to happen just horrified me. I don’t have the patience for that.”

They had planned for a 10-episode season, and though shooting the rest of the episodes took a little longer than their one-act pilot, post-production proved the most time consuming. “If I had known how much work it was gonna be when we started, I probably would have been a lot more hesitant to do it,” Yankou says. “But I’m really glad that I did.”

Work inside the editing room paid off. 101 Ways can boast a high production value, on par with Daily Grace and Dating Rules From My Future Self, both of which Yankou cites as her web inspirations. And it’s actually funny, a tough feat in a sea of mediocre web humor. Sam’s friends, played by Taylor Dearden and David Mandell, ham it up on the sidelines, improvising much of their rapport.

Still, launching online, broadcasting the results of hours of work, didn’t come without trepidation. “I was super nervous putting that out into the world,” Yankou says, “’cause it’s just such a big piece of me and everyone who worked on it.” A Feb.14 post on the show’s Facebook page cheers its first dislike  But feedback otherwise has been overwhelmingly positive — between comments online and in-person praise on campus. “It’s been really good. It’s exceeded my expectations, definitely,” Yankou says.

Yankou recognizes 101 Ways puts her on the road to building a portfolio, potentially opening doors on the career front. But she says her primary goal is to create something that speaks for the average high school kid in all of us. “As long as people are laughing and relating to it,” she says, “I think that I’ve done my job.”

Check out the second episode, out on Thursday.