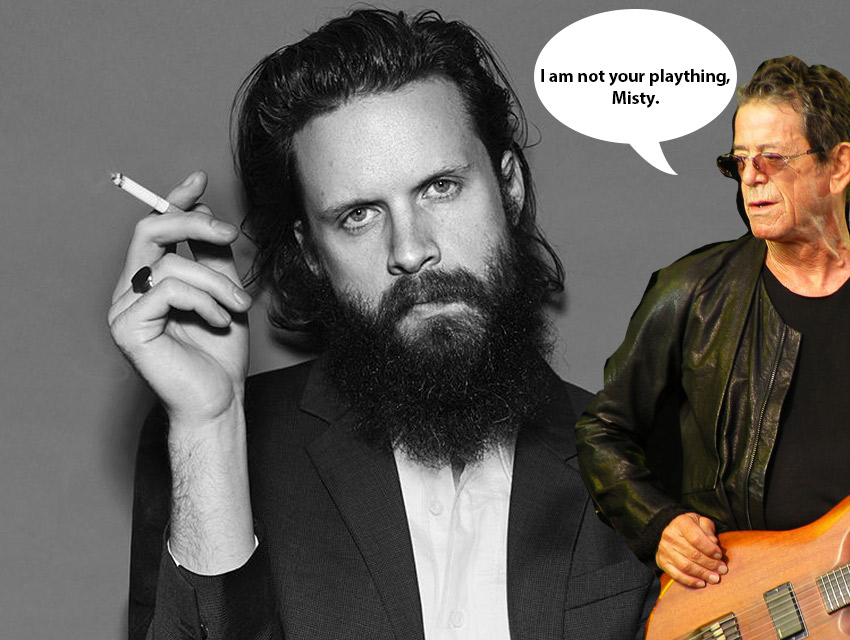 Last Christmas, singer-songwriter Ryan Adams had the idea to cover Taylor Swift’s 1989 in its entirety. This August he announced that the idea would become a reality, much to Swift’s delight:

Ryan’s music helped shape my songwriting. This is surreal and dreamlike. Countdown to #RyanAdams1989 @TheRyanAdams pic.twitter.com/pGZB0uUqiB

Adams’ highly anticipated record was released yesterday, and it is dripping with just about all of the fuzzy alt-country vibes we can handle (“I thought, ‘Let me record ‘1989’ like it was Bruce Springsteen’s ‘Nebraska,'” he told Rolling Stone). The track-by-track overhaul spawned another string of covers by former Fleet Foxes drummer Father John Misty (aka Josh Tillman), who channeled Lou Reed with his own Velvet Underground-inspired reinterpretations. Tillman posted covers of “Blank Space” and “Welcome to New York” to his Soundcloud yesterday, but took them down this morning because, as Tillman explains, Lou Reed visited him in a dream and said, “I am not your plaything.” Tillman, thankfully, recounts the dream in an official statement. Read the whole explanation below:

I had a very strange dream that I abruptly woke up from around 3am early this morning.  I was crab-walking around a neighborhood in New Orleans that, though it does not exist, is a recurring location in my dreams.  My childhood friend Brian Kawamura was was telling me I still owed the tennis rental place $7000 when the French psychoanalyst Jacques Lacan was suddenly standing over me, saying over and over, “The only thing crazier than a peasant who believes he is King, is a King who believes he is a King.”  He put one of those birthday Burger King crowns on my head and out of the clouds a sort of “Switched on Bach” version of “Ode To Joy” began to play. A crowd which had formed around me began to sing along, with tears streaming down their faces.  The crowd was obviously hypnotized and I assumed if I crept away discreetly no one would notice.  The earth become a sort of treadmill, and though the locations (The Great Wall of China, a McDonald’s where I had my 3rd birthday, the town from Michael Haneke’s The White Ribbon, Vignola’s restaurant in Rockville, Md.), “Ode To Joy” and the crowd remained all around me.

All of a sudden it was time to soundcheck, which I was late for, and Barack Obama offered to give me a ride on Air Force One.  He told me he needed urgent advice regarding some important policy decisions, and we spent the day in Hawaii playing basketball, petting his dogs, golfing and the like when I, gripped with anxiety, told him I really needed to get to soundcheck so we needed to discuss the ruling of the free world.  By this time he had turned into an obscene visage of my Father and said, “I have one injunction for you, son: That you enjoy life.  It is by this mandate that all is ruled.  It is the true tyranny; the equalizing force that binds us all.”  I jumped out of Air Force One and landed on top of this massive pink, sparkly, glowing blob that stretched for miles beyond miles, covering entire cities, and I had to keep gulping down chlorophyll because the thing was emitting insane levels of EMF’s, so my mouth and hands were stained dark green.

Down inside the blob I could see thousands of familiar faces and one of them was Lou Reed on a catwalk hand-cuffed to supermodels who had adopted babies handcuffed to them and Lou said, “Delete those tracks, don’t summon the dead, I am not your plaything.  The collection of souls is an expensive pastime.”  Then I woke up.