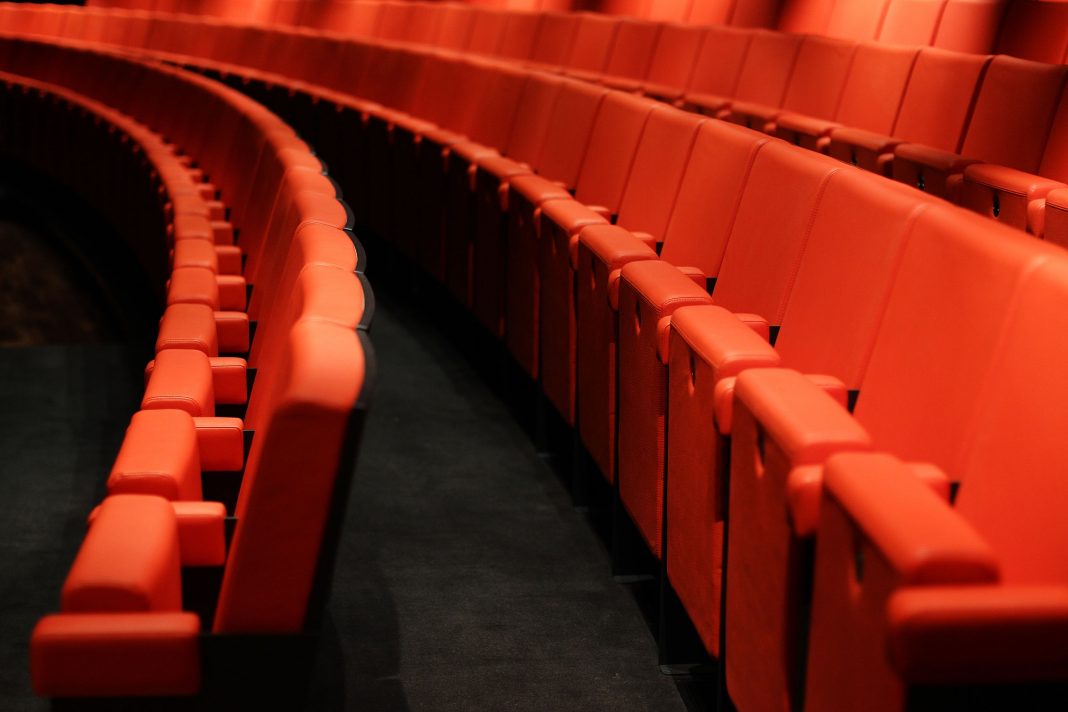 The fourth greatest feeling in the world is that sense of ease and security you get in a theater when the previews come to an end, the lights fully dim, you lean back a little further in your seat like oh man this is it, and the introductory studio logo appears on the screen to accompanying fanfare. Maybe it’s a thriller, and you know you’ll spend the next two hours and six minutes of your life completely tense, and this is the preparatory moment of letting the stress of life go before taking on a new load of cathartic stress. Or maybe the movie is something charming and escapist, and the intro sets the tone. Regardless, these logos and musical themes are as crucial a part of the moviegoing experience as neon marquees, glossy floors, the smell of popcorn, and armrests that are somehow only locked in the down position when you’re on a date. Each of these pre-movie sequences has evolved over the years, their histories dating back over a century.

Watercolored in 1933 by Emil Kosa Jr. (who painted innumerable matte backdrops for films and won an Academy Award for his work), the art deco-style monolith originally read “20th Century Pictures Inc.” before the latter half was replaced by Fox when the two companies merged in 1935. Alfred Newman composed the Fox Fanfare, which John Williams would later use as the launching point for his Star Wars main title, which he composed in the same key. It became such a part of the experience of seeing Star Wars, that the fanfare was included on the soundtracks for the first six movies (though it’s been removed from recent editions of all the films but IV).

When the studio introduced CinemaScope in 1953 and moved to a wider aspect ration, a new artist, Rocky Longo, painted an updated version of the logo, tilting the zero to make it fit the wider format (it was straightened again in 1981). In 1994, it was changed to a CGI flyover shot that swoops down from above, with the sprawl of L.A. in view. If you look closely, you can see the Hollywood sign and the name of Fox execs on storefront signs. The sequence gets retooled with (much) better CGI in 2009.

Doesn’t really matter if you’re the most cynical person in the world, that twinkling instrumental rendition of “When You Wish Upon A Star” will get you every time. The logo with the castle actually only goes back to 1985 and The Black Cauldron (one of the most severely underrated/genuinely frightening Disney films ever). Before that, Disney had just used standard issue title cards.

Then, in 1995 it came to pass that Toy Story was made—and with it a new logo—and the world would never be the same. In the intro, the POV pulls out from under the portcullis of a minimalist CGI castle with little yellow flags, and a second wave of nostalgia was born. Disney retained their old 2D logo for non-Pixar films (including all those disappointing sequels to the classics) well into the 2000s. And then, in 2006, Pirates of the Caribbean: Dead Man’s Chest—cinema’s greatest adventure film—was released with an entirely new intro sequence. This one, the one Disney continues to riff on, brought us sweeping views of a sleepy countryside just after sunset as the camera soared over the castle, settling over the river as the shooting star arcs over the tallest tower. It’s often the best part of an entire movie, and that’s not even a bad thing.

Paramount founder W. W. Hodkinson doodled the “Majestic Mountain” logo on a scrap of paper one day, basing it, legend has it, on Mt. Ben Lomond in Utah where he grew up. There were 24 stars arching over the peak in the first design (though that number has inexplicably decreased to 22 in the time since) supposedly representing each of Paramount’s contract movie stars. Or maybe the stars are Illuminati symbolism for fallen angels and the mountain is Mt. Hermon where there’s a portal through which evil supernatural beings enter our world and mate with humans and sorry, did I get off track? Paramount!

Warner Bros. has changed hands a few times in since 1923, so the logo’s seen a decent amount of variance. That rippling gold reflection of the studio lot we see in the current version?—it’s a throwback to the company’s original logo of a shield framing a photo of the studio with the letters WB near the bottom. Saul Bass, a titan of graphic design, put his own spin on it in the ’70s (see 0:52), before the logo returned to its classic look in the ’80s. In 1998, the CGI version we’re familiar with today took shape. An abbreviated version of the theme “As Time Goes by” from Casablanca, one of Warner Bros.’s greatest films, can still be heard when the logo appears at the beginning of many of their movies.

Universal used impressive series of globe models for their iconic logo all the way up to 1997, when the CGI sequence they would use until 2012 debuted. And yeah, sure, between 2010 and 2012 it looked like a bad screensaver with the lime green continents weirdly glowing with spines of light, but that’s OK because 1997 also brought the unforgettable Jerry Goldsmith music we all know and love. Universal updated their logo in 2012, the studio’s 100th anniversary, and brought the CGI into the modern era. As the POV pulls back from the earth, the setting sun reflects across the oceans as cities are illuminated at night. It’s more majestic than ever.

Thomas Harlander is a staff writer at Los Angeles magazine. You can follow him on Twitter and Instagram. He recently wrote “Universal Studios Hollywood Is Building a Nintendo World.”