Home Film Fall Preview: All the TV, Movies, and Music We Can’t Wait to... 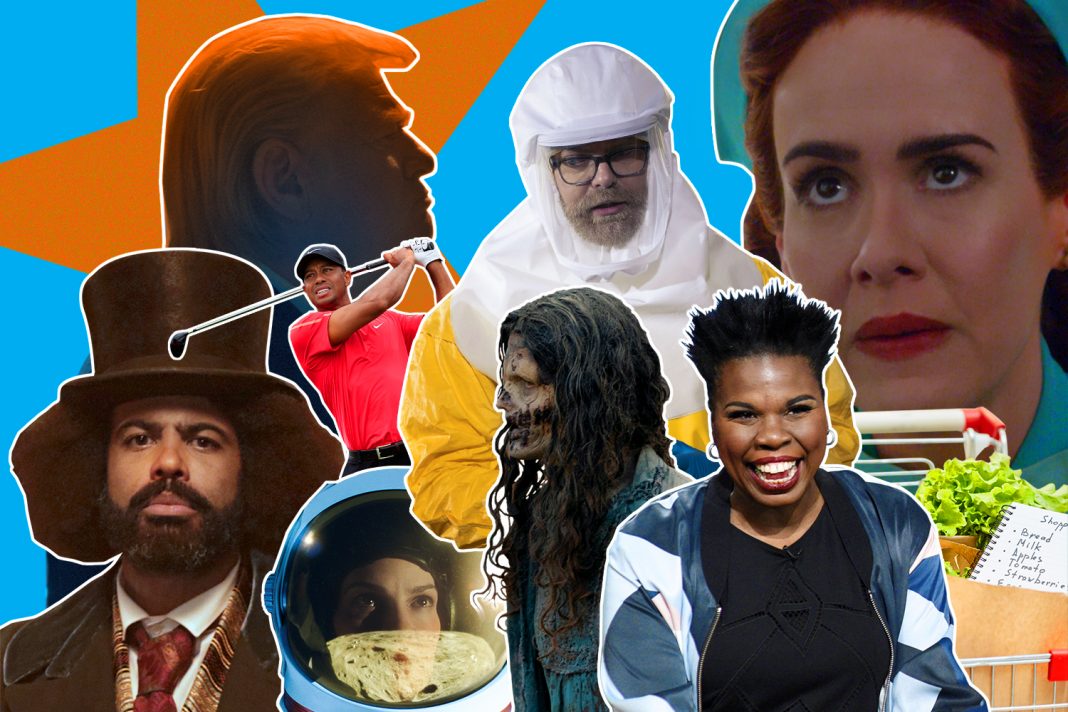 Yes, fall is shaping up to look like spring and summer, but luckily a big batch of new entertainment is on the way to keep you sane. 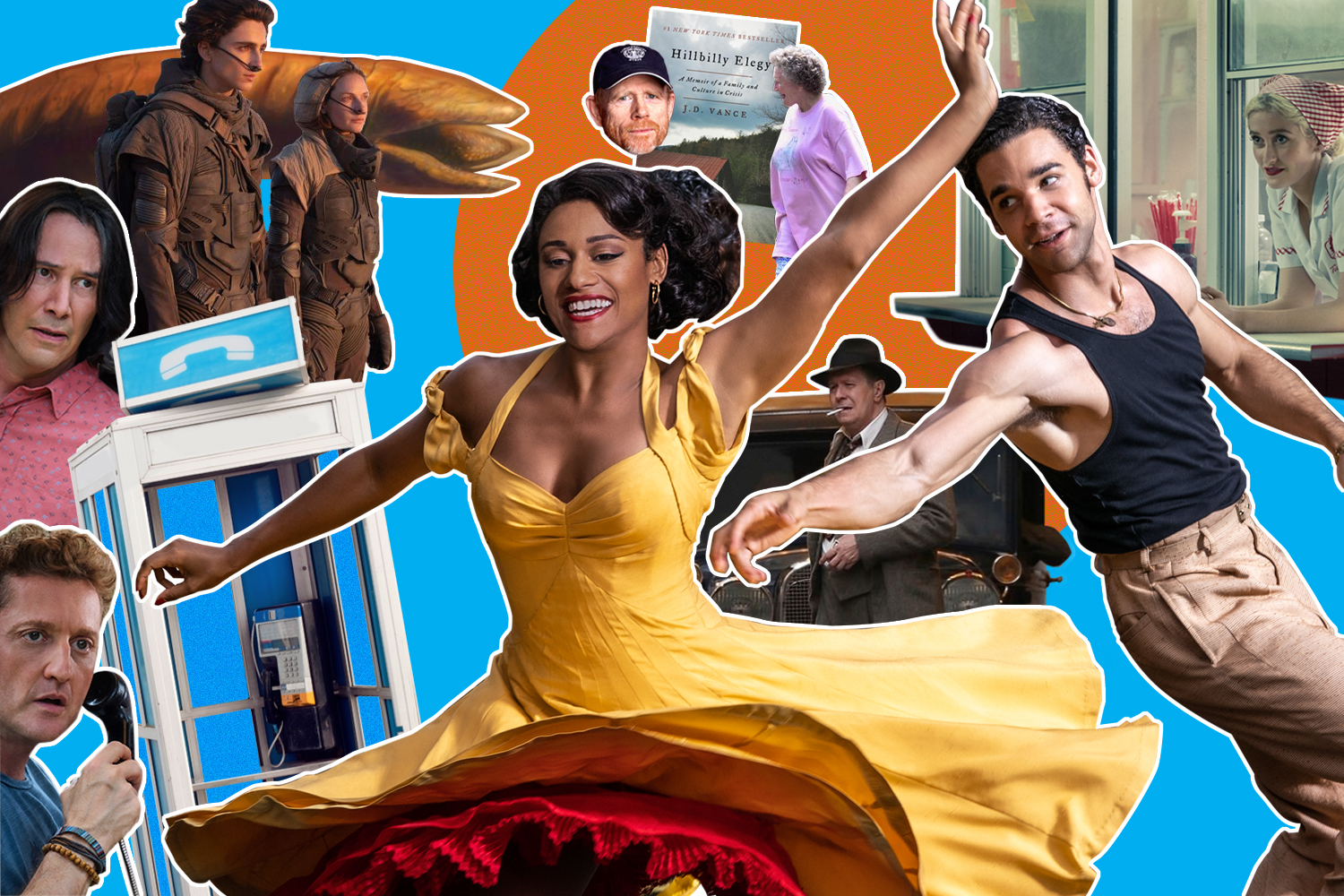 Decades after their first excellent adventure, Keanu Reeves and Alex Winter’s lovably dim dudes are still time-traveling and partying on, only now they’re middle-aged dads. At drive-ins and on VOD now.

The latest from Charlie Kaufman (Adaptation) is a dark tale about a young woman (Jessie Buckley) who questions the nature of existence during an unsettling visit with her boyfriend (Jesse Plemons) and his parents (Toni Collette and David Thewlis). Currently on Netflix.

Based on a best-selling memoir, a Yale law student returns to his hometown where he examines three-generations of family history while confronting white poverty in the Rust Belt. Ron Howard directs; Glenn Close, Amy Adams, and Gabriel Basso star. Netflix, fall 2020.

David Fincher’s award contender is a biopic about screenwriter Herman J. Mankiewicz and his battle with Orson Welles over credit for Citizen Kane. Netflix, fall 2020.

The classic sci-fi novel has long defied cinematic interpretation, but hopes are high for this one featuring Timothée Chalamet, Rebecca Ferguson, and Oscar Isaac. In theaters December 18.

Steven Spielberg’s reimagining features a script from Tony Kushner and stars Ansel Elgort and Rachel Zegler, who beat out 30,000 other potential Marias for the part. In theaters December 18. —Jordan Riefe

Hilary Swank leads a mission to Mars in this sci-fi trek from the writers of Parenthood and Friday Night Lights. Currently on Netflix.

On a mysterious island, the lines between fantasy and reality blur for Jude Law and Naomie Harris. HBO, September 14.

Based on James Comey’sbook Higher Loyalty, Jeff Daniels stars as the FBI director and Brendan Gleeson is Trump. Showtime, September 27 and 28.

The five-part docuseries about the iconic L.A. venue promises never-before-seen footage, including early sets by David Letterman and Sam Kinison, and interviews with comedy legends like Jim Carrey and Whoopi Goldberg. Showtime, October 4.

Marvel’s next TV swing follows the offspring of a storied serial killer as they hunt demons. Hulu, October 16.

After the assassination of a London crime boss, a scramble for a new leader ensues. Think Game of Thrones in the underworld. AMC, October.

This adaptation of the Tom Wolfe book takes us back to the early days of the space race as NASA hustles to find the nation’s first astronauts. Disney+, October.

The Walking Dead: World Beyond

A spin-off about the first generation of kids to come of age in The Walking Dead’s post-apocalyptic universe. Sadly, none of them have TikTok.
AMC, October 4.

Rachel Uchitel breaks her silence in this two-parter about the rise, fall, and return of Tiger Woods. But don’t call it the legendary golfer’s Last Dance—he declined to be interviewed. HBO, December 13 and 20.

A coming-of-age docuseries that traces the lives of students at a university for the Deaf and hard of hearing. Netflix, October 9.

In this conspiracy dramedy from Gillian Flynn (Gone Girl), fans obsess over a popular comic book whose pages hide warnings about the end of the world. Amazon Prime, early Fall.

This rom-com about a marketing exec (Lily Collins) who wins the job-relocation lottery and moves to Paris comes from Darren Star (Sex & The City), naturally. Netflix, Fall.

If watching The Last Dance and scouring the web for details about the Clueless reboot isn’t fully satisfying your ’90s nostalgia needs, then check out the alt-rock stylings of this Brit singer-songwriter. She lit up the summer with her catchy single “Care,” and her forthcoming debut album, Fake It Flowers, set to be released by year’s end, is sure to be a must-listen for fans of Belly, Liz Phair, and Sonic Youth.

The past 18 months have seen this quartet jam with Dua Lipa, score three Billboard Hot 100 hits, and become the first K-Pop group to play Coachella when they took the stage in 2019—all without releasing an album. Their first full-length is due October 2, and judging by the hyperactive earworm of a lead single “How You Like That,” it’ll be the most fun anyone’s gonna have this side of a COVID-19 vaccine.

She hasn’t made too many friends with her recent self-pitying tweets, but a Lana release always feels like an event. So start prepping now for the early September drop of her seventh album, Chemtrails Over the Country Club. Expect lots of songs about being sad. And California. And being sad in California.

Five years on from the singer-songwriter’s tragically beautiful indie-folk masterpiece, Carrie & Lowell, Stevens is finally following it up on September 25 with his eighth solo album, The Ascension. Confirmed track titles include “Landslide,” “Death Star,” and “Lamentations,” so keep the tissues and antidepressants handy.

After rocketing into the mainstream with 2018’s Astroworld, the Texas rapper is well overdue for a new album—and something is obviously afoot. This year has already seen Scott release collabs with Kid Cudi and Rosalía, as well as teasing all new music on his Beats 1 show, .WAV Radio. Expect more magnificent fruits of his labor very soon.

The Barbadian has spent the bulk of the last few years hawking her Fenty Beauty line and who can blame her, given the brand’s estimated $3 billion valuation. But there’s fervent fan speculation online that her ninth studio album is imminent. While there’s no confirmed release date, 2020’s penchant for delivering the most unlikely scenarios surely means that anything is possible. C’mon RiRi, we need this!

RELATED: 8 New Novels You’ll Find Us Curling Up with This Fall