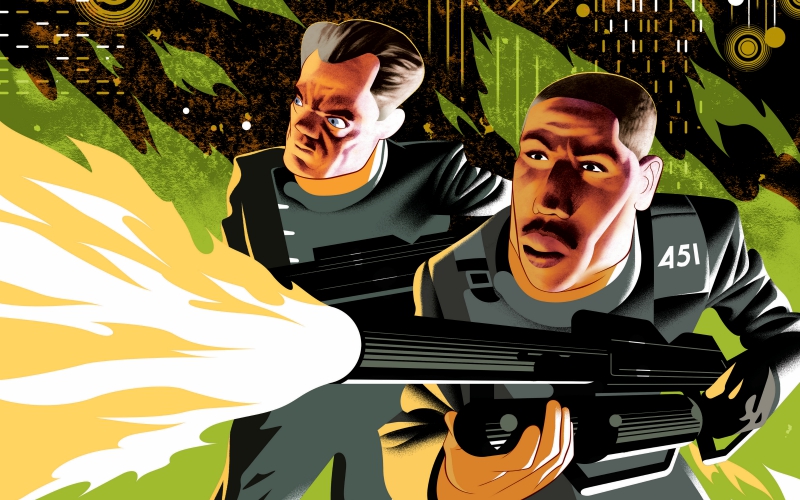 In the totalitarian state of HBO’s new Fahrenheit 451 (May 19, 8 p.m.), fixed on some undated American time line, the word is the target and the mind is scorched earth. “News, facts,” leader Michael Shannon instructs his brigade of firemen with equal parts disdain and dismay, “it’s all graffiti.”

Shannon’s protégé, Michael B. Jordan, and the firemen under his command function as censors and enforcers of what people can imagine and commit to the paper that supposedly burns at 451 Fahrenheit, building bonfires of books in the night, cheered on by the public and media.

An imagination that can translate itself into words—not to mention stories—is dangerous for how it stirs another’s imagination. By its very nature, a book carries a virus that infects anyone who reads it. What’s in a book? “Insanity,” says Shannon.

Fahrenheit 451 has been promoted as a dystopian story because dystopia has become a fashionable notion tossed around without a sense of what it means. Most subversive about Ramin Bahrani’s remarkable adaptation of the Ray Bradbury novel (previously filmed, less successfully, more than half a century ago by the French filmmaker François Truffaut) is that its oppressed state isn’t dystopian but in fact a utopia that questions whether it’s oppressed at all.

Its consumption-oriented populace is content with a plugged-in existence so sensory-overloaded that the collective mindset has been rewired, and the shimmery cityscape glistens with glamorous projections and digital neon, at the small price of a quaint medium that has more in common with 15th-century Gutenberg than 21st-century Jobs. To this utopian public, an underground that traffics in the revelations of contraband text is like the Amish crossed with the Taliban, a strange cult outside time and the law.

Bradbury originally published Fahrenheit 451 eight years after the end of World War II—as recent to the novel’s first readers as the Iraq War is to us now—when Nazi book burnings were associated with the Third Reich’s other horrors. It was a futuristic fable, in other words, informed by a history that had barely receded and by a present in which the domestic persecutions by Senator Joseph McCarthy and the House Un-American Activities Committee signified everything the country had gone to war against.

The clarifying power of that war was its moral lucidity and capacity for reminding us that democracy was at stake. Seventy years later such reminders are still exceptional in the scheme of things, when the stakes aren’t realized until too late.

Hitler was elected. He didn’t lead any coup; rather he won a plurality of a populist protest vote against a Weimar Republic perceived as corrupt and impotent, at which point Hitler was offered the German chancellorship.With the threat of civil war hanging over Italy, Mussolini was elected to the parliament that made him its prime minister. Mao and Castro were bestowed power by widespread popular uprisings in China and Cuba.

The conception of totalitarianism as something engineered by small bands of madmen and murderers who seize the reins of power and impose rule on grumbling masses is a convenience by which grumbling masses later absolve themselves; the historical record shows that masses voluntarily, even enthusiastically choose to give up power and place their fate in the hands of those who claim they’ll run government like a business and drain metaphorical swamps.

This is preceded by a collapse of faith in the usual clockwork that makes free societies tick, including an obstreperous press and codified tenets of justice. As authors Steven Levitsky and Daniel Ziblatt point out in their recent How Democracies Die, long-standing representative institutions are exploited in ways that perpetuate the furies and resentments that, by way of an authoritarian boss, then demolish those same institutions. We assume utopia is democratic and dystopia is totalitarian when the dynamics are often the other way around. The historical dystopia of Netflix’s 16-hour Babylon Berlin, which aired this past winter, is a mix of anarchic danger and liberated exhilaration, where free will runs amok and creates the sort of bedlam in response to which totalitarians promise utopian order.

In the German series’s titular metropolis of the late 1920s, a shattered World War I veteran turned detective hooked on morphine becomes obsessed with solving a crime whose political implications will cascade heedlessly into a horrific 1930s he can’t imagine. Two things are apparent and not exclusive of each other: In babylonian Berlin the social fabric frays to within a thread of its life; and now and then, if we’re being honest, it looks like a hell of a lot of fun. People are drinking, dancing, taking drugs, having sex, reinventing identities. Life is a cabaret, old chum.

In the meantime Berlin’s utopians wait in the shadows to overturn the Treaty of Versailles, laying the groundwork for what they suppose will be the return of a kaiser’s proud empire. Of course what they really lay the groundwork for is Herr Hitler’s barbarous tour de force. By definition the absolutism of utopia—a society in which everything is absolutely right— evokes the same absolutism with which a totalitarian society replaces any semblance of a moral compass.

The essayist Michael Ventura has written that whole countries can go as crazy as individuals do. Babylon Berlin and Fahrenheit 451 bookend history; they’re the Before and After of utopian, make-the-country-great-again aspirations that subordinate the facts and the unkempt imagination to unperturbed perfection.

At its conclusion Babylon Berlin solves the small crime but not the sweeping corruption of humanity for which the small crime is but a sordid prelude; one’s only complaint about the series is that its real drama is always happening off camera.

At Fahrenheit 451’s conclusion, the film takes wing, quite literally, toward a horizon of hope; one’s only complaint is that it doesn’t make more of Bradbury’s most inspired conceit, by which each reader of the Resistance becomes the very book he or she reads.

In both Babylon Berlin and Fahrenheit 451, truth remains the most pervasive and profound casualty of totalitarianism while also the most abstract. Forces of darkness never claim to be at war with the truth; rather, they argue on behalf of some supposed greater truth that supersedes quantifiable data at odds with their biases.

Objective truth is regarded—by leaders who themselves think and act in conspiratorial terms—as the weapon of conspiratorial enemies. In the “graffiti” of our news, facts, and stories lies a truth that speaks not to viscera and sensation but to the rationale and empathy of a higher humanity no one can burn away.