Home Awards Watch Fact and Fiction: What’s the Deal with All Those Movies “Based on... 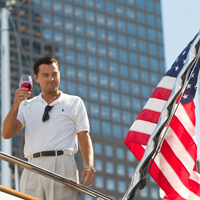 The Wolf Of Wall Street

Starting with Mutiny on the Bounty’s Best Picture win in 1936, movies based on true stories–no matter how loosely–have been raking in trophies at the Academy Awards. This year, six of the nine Best Picture nominees are based on real events and 47 of the 117 Oscar nominations have gone to people who worked on “true story” films. Even for the Academy, that has to be a record.

Among the nominees for this year’s Oscars, American Hustle, 12 Years a Slave, Captain Phillips, Dallas Buyers Club, The Wolf of Wall Street, and Philomena received Best Picture nods while earning nods in numerous other categories. Additionally, The Grandmaster, Lone Survivor, Saving Mr. Banks, and Mandela: Long Walk to Freedom have each earned one or two nominations.

Perhaps voters nominate these movies because the “based on a true story” designation adds a level of gravitas. What better demonstration of cinema’s importance than its ability to shine light on untold stories and crucial issues? But the appeal of these movies may lay less in the genre than in the individual stories they tell.

American Hustle
The furthest removed from the real events on which it is based, the film doesn’t say much about Abscam. Instead, it uses the scandal as a springboard to explore deception and identity. More than anything else, the movie is an actor’s showcase, which is why it’s earned nominations in all four acting categories.

12 Years a Slave
Adapted from the book of the same title, 12 Years a Slave tells the story of Solomon Northup, a 19th-century free black man who was kidnapped and sold into slavery. On paper, it sounds more like a historical drama, a genre that isn’t quite the same as “based on a true story.” But the movie is important enough and slavery is a topic that has been vastly underrepresented in American movies, despite its tremendous impact on our history. It makes sense that the Oscars would honor one of the few great films made about the subject.

Captain Phillips
Somali piracy periodically makes the news, and the interplay of globalization, third world poverty, and first world military action makes it a ripe subject for dramatization. There are plenty of piracy stories; this movie merely used one of the few incidents that ended in a fatal confrontation rather than a negotiated exchange, a choice that speaks to the way Hollywood constantly tries to mine the most salacious aspects of any subject.

The Wolf of Wall Street
The events of the movie take place from the late 1980s to the mid-’90s but corruption in the financial sector is still a hot-button issue in 2014. Watching Jordan Belfort is like watching the reckless honchos of America’s banks gambling with people’s money and losing–badly. Wolf plays the tricky game of encouraging viewers to ogle the opulent lifestyles of the 1% while laying bare these individuals’ soullessness. If the 2008 economic collapse taught us anything, it’s that little has changed.

Dallas Buyers Club
Starring Matthew McConaughey as Ron Woodroof, an HIV-positive man who begins smuggling AIDS drugs from Mexico, the movie is something of an outlier. In 2014 drug therapies have transformed AIDS from a death sentence to a manageable disease for many Americans. The epidemic doesn’t dominate news headlines the way it did in the early ‘90s. And the movie’s main character isn’t even a gay man (although the consensus is that Woodroof was probably bisexual). Yet Dallas Buyers Club is well suited for our moment. Often described as “the Macklemore of film,” it’s a movie that glorifies “the ally,” the straight person who selflessly throws in their lot with their less fortunate brothers and sisters. It’s a way to make gay issues feel safe for mainstream audiences.