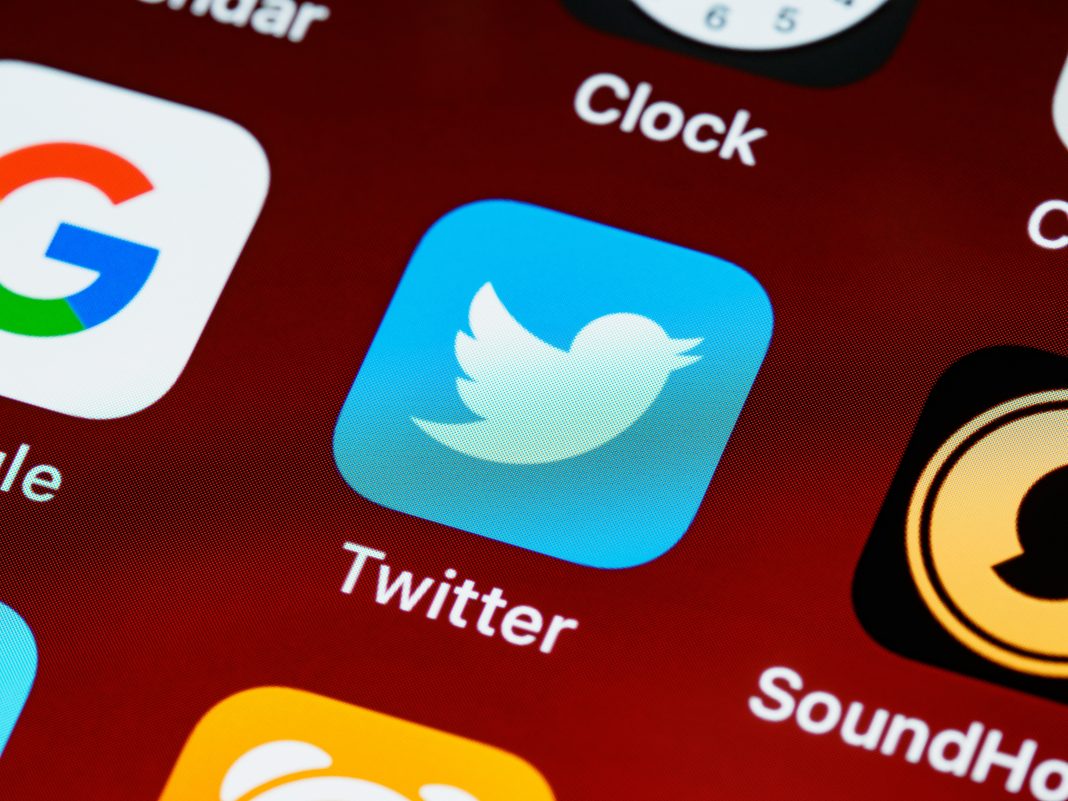 Photo by Brett Jordan on Unsplash

UPDATE: JANUARY 8, 2021 – Twitter, a favorite platform of soon-to-be-former president Donald Trump, announced on Friday afternoon that it has “permanently suspended” him from the platform.

“[W]e have permanently suspended the account due to the risk of further incitement of violence,” a company statement says.

After the mob attack at the U.S. Capitol, the @RealDonaldTrump account had been locked for 12 hours and Twitter demanded the deletion of three specific tweets deemed to have been linked to the violence. At the time, it was warned that “future violations” could result in a permanent ban.

Two new tweets that appeared on the account today appear to have pushed the platform to fully pull the plug.

In one, Trump wrote: “The 75,000,000 great American Patriots who voted for me, AMERICA FIRST, and MAKE AMERICA GREAT AGAIN, will have a GIANT VOICE long into the future. They will not be disrespected or treated unfairly in any way, shape or form!!!”

After that he tweeted, “To all of those who have asked, I will not be going to the Inauguration on January 20th.”

“Due to the ongoing tensions in the United States, and an uptick in the global conversation in regards to the people who violently stormed the Capitol on January 6, 2021, these two Tweets must be read in the context of broader events in the country and the ways in which the President’s statements can be mobilized by different audiences, including to incite violence, as well as in the context of the pattern of behavior from this account in recent weeks,” the statement asserts.

Today’s actions to block @RealDonaldTrump do not impact the official account, @POTUS. That account remains active, though nothing has been posted to it in several days. It will be turned over to the Biden team on Inauguration Day.

JANUARY 7, 2021 – As a violent mob of his supporters stormed the U.S. Capitol with little police resistance on Wednesday, President Donald Trump posted a video to social media telling the “very special” rioters that he loves them, and doubling down on the false claim that he actually won reelection.

“I know your pain. I know you’re hurt. We had an election that was stolen from us,” he said, from the safety of the White House as members of congress and Vice President Pence sheltered in place at the Capitol. “It was a landslide election, and everyone knows it, especially the other side, but you have to go home now. …We love you. You’re very special. You’ve seen what happens. You see the way others are treated that are so bad and so evil. I know how you feel. But go home and go home at peace.”

Facebook, Instagram, Twitter, and YouTube removed the video shortly after it was posted, and on Thursday morning, Facebook CEO Mark Zuckerberg followed up by announcing that Trump would be banned from that platform as well as from Instagram for at least the rest of his term, which ends in just 13 days.

“The shocking events of the last 24 hours clearly demonstrate that President Donald Trump intends to use his remaining time in office to undermine the peaceful and lawful transition of power to his elected successor, Joe Biden,” Zuckerberg wrote in a Facebook post. “We believe the risks of allowing the President to continue to use our service during this period are simply too great. Therefore, we are extending the block we have placed on his Facebook and Instagram accounts indefinitely and for at least the next two weeks until the peaceful transition of power is complete.” 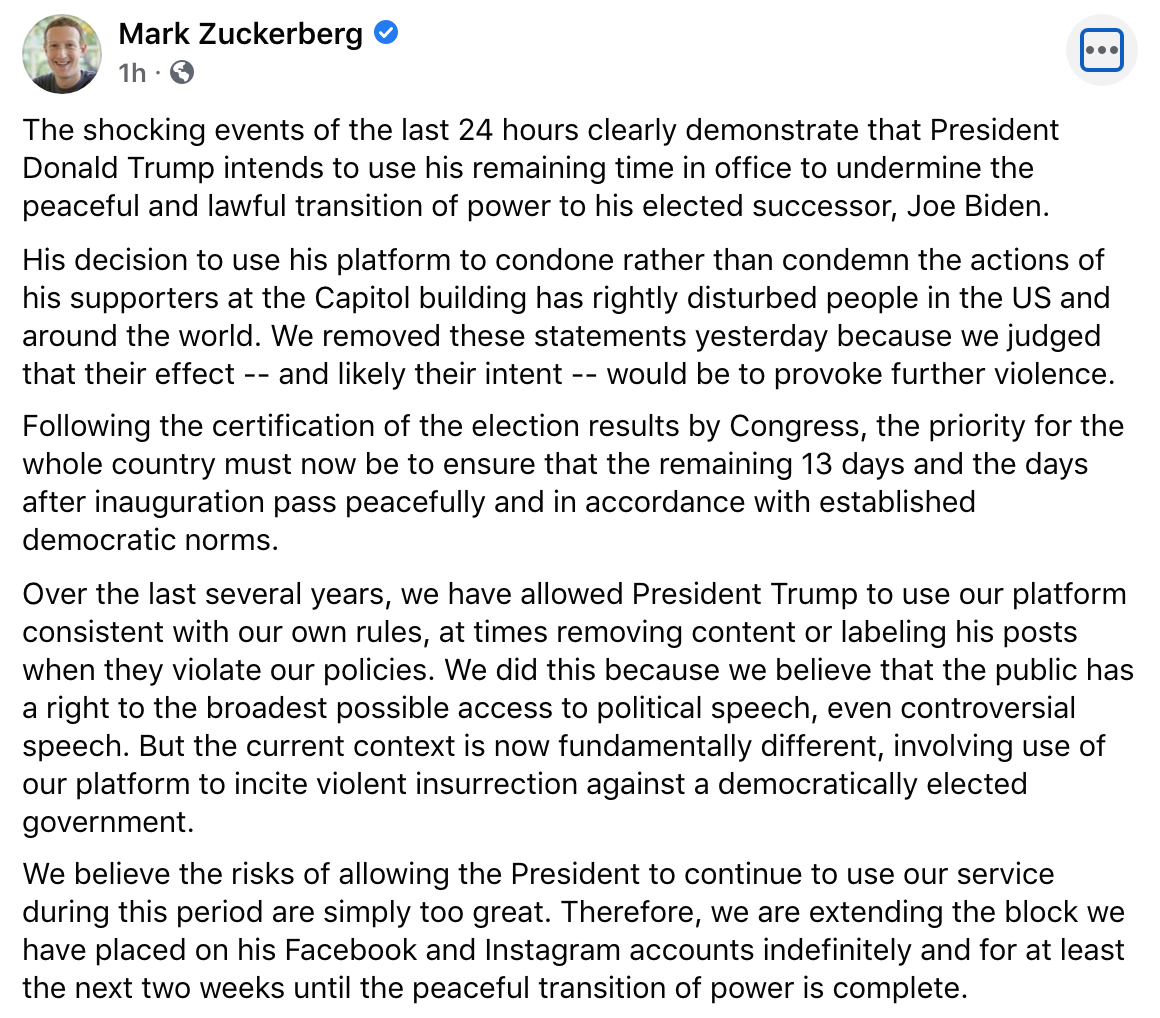 The announcement was met with indignation from the Parler crowd stamping its feet about freedom of speech, and a cavalcade of eye rolls from everyone else. Besides the distinct feeling that the move is too little, way too late, some observers are pointing out that Zuck could have an ulterior motive.
Lawyer and political author Teri Kanefield noted in a tweet that Zuckerberg’s announcement happens to coincide with Democrats gaining control of the Senate with the election of Jon Ossoff and Raphael Warnock in the Georgia runoffs on Tuesday. “While I’m sure the events yesterday were part of the motivation, I’d bet the complete motivation was shocking events + Democratic control of the Senate = Zuckerberg’s fear of regulations that deprive him of the ability to spread lies when he wants to (for fun and profit),” she wrote.
As the New York Times points out, Facebook allowed Trump to violate its rules of engagement for years with impunity: “For years, Mr. Zuckerberg and other executives at Facebook had given Mr. Trump significant leeway on his Facebook account, often allowing the president’s false statements to stay up on the network despite heavy criticism. Mr. Zuckerberg has repeatedly said he did not want Facebook to be ‘the arbiter of truth’ in political discourse and that he believed strongly in protecting speech across Facebook, the platform he founded that is now used by more than three billion people globally.”
Trump has 35 million followers on Facebook and 88 million on Twitter. The latter platform suspended the president’s account for 12 hours yesterday, but has not committed to shutting down his account until a peaceful transfer of power has occurred.

RELATED: Views from Inside the Pro-Trump Insurrection at the Capitol Building