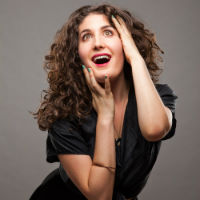 “I’ve always been really fascinated by the language of expertise,” explains the Los Angeles-born, New York-based comedian Kate Berlant. Her strange and compelling improvisational comedy explores the use of knowledge in social interaction and has been called everything from experimental standup to avant-garde performance art. Berlant’s approach to her work is unusual: speaking in the skewed rhetorics of professionals, college professors, and self-help gurus, she embodies characters and parodies their perceived skillsets. Berlant thrives on confusion and encourages audiences to embrace it through her abstract sense of humor. “The first time I did standup was at my high school, when I was seventeen,” Berlant says. “I was wearing a kimono and sitting in a wheelchair. I forget why.”

Kate Berlant will open for folk singer Father John Misty at the Wiltern this Saturday (November 2). Here are seven strange and compelling facts about her.

❶ Berlant got her start performing at open mic nights in L.A. “I would go to the Laugh Factory and do a set. I wasn’t old enough to get in, so I got a fake ID.” Today, Berlant hosts Crime and Punishment, a popular weekly comedy showcase at NYC Lower East Side stalwart Cake Shop.

❷ Berlant attributes her knack for performance to her childhood in Santa Monica. “It’s a classic case of being an only child,” she says. “There weren’t any other kids around, so I always wanted to be able to hold my own with the grown-ups, and be entertaining at dinner parties. Both of my parents are animated storyellers, so I learned early on that show and tell was important.”

❸ The creative process was central to Berlant’s life from day one. She grew up in the studio of her father, artist Tony Berlant. “I’ve learned how to resist the linear from my father,” Berlant says. “I grew up around him working every day and I saw his art unfold. It has really made me relish the process of creation as opposed to the result. Being around someone who works everyday and is in love with working is really powerful.”

❹ David Cross’s 2003 documentary Let America Laugh was an early influence on Berlant’s decision to pursue comedy. “He tours the country with his set performing at bars and dealing with terrible audiences,” she explains. “I liked the idea of just getting in the van and going on the road.”

❺ At eighteen, Berlant left L.A. to attend Bard College in upstate New York (later she transferred to New York University). “I was obsessed with the New York standup scene at that point,” she explains. “I went down to the city all the time to catch shows and perform myself. I’m a huge fan of Chelsea Peretti, Andrea Rosen, Heather Lawless, and Shonali Bhowmik and their sketch-group Variety Shac. There are so many great women comics.”

❻ Musician Father John Misty happened to be in the audience when Berlant was a guest on Nick’s Big Talk Show at UCB last year. Misty, whose real name is Joshua Tillman, was so impressed that he invited her to tour with him. “He is deeply funny and very interested in comedy,” Berlant says. “We talk a lot about interaction with the audience, how it’s always a confrontation. It can be either tender or filled with horror. I feel really lucky to be doing this with him.”

❼ Berlant will return to New York after her tour. Her main connection to Los Angeles at the moment is a new character she’s been incorporating into her set. “It’s a kind of classic, affected L.A. voice,” Berlant says. “I imagine the character as one of those lazy, sexy girls you see in L.A. The kind whose expertise is boredom. It comes back to my interest in the language of expertise. As a performer, it’s all about delivering information, not because you understand it but because you like the sound of it.”