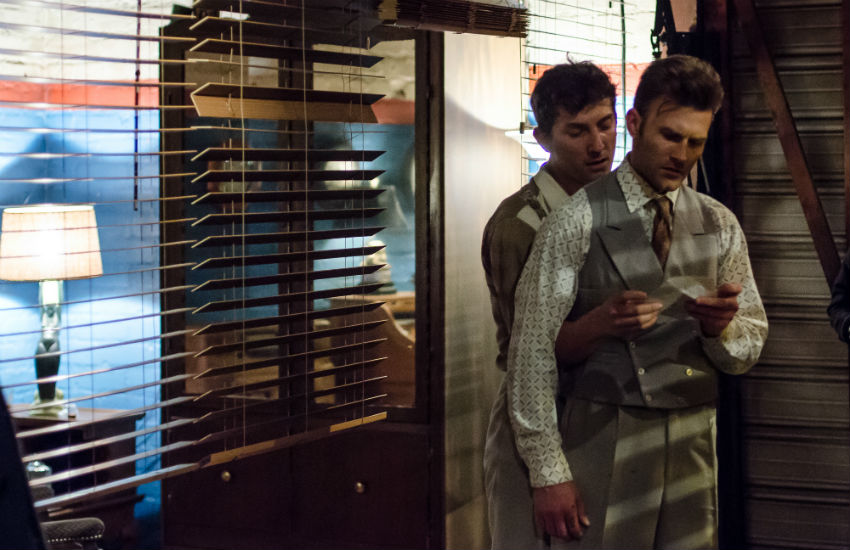 When you go see The Day Shall Declare It, don’t forget to wear comfortable shoes. In this experimental and immersive theater work currently running at Imperial Art Studios downtown, the audience never sits. Instead, audience members follow performers through a magical dream space—what was once an engine machine shop is now a performance space for this fresh, nuanced, poetic pastiche about labor, work, and love.

Comprising texts from various Tennessee Williams plays and writings, as well as pieces lifted from Working by oral historian Studs Terkel, The Day Shall Declare It is set during the Great Depression, with 1930’s style décor and costuming. In a congeries of surprises, performers from the Wilderness theater company whisper to audience members, abruptly changing identities and scenes, creating a sense of fracture and fragmentation.

We sat down with co-directors and co-creators Annie Saunders and Sophie Bortolussi to talk about how this experiment came to be, and what they hope to communicate about the nature of work and working.

What generated the idea for The Day Shall Declare It?
Annie Saunders: When I first got to L.A., I was driving around seeing all these abandoned buildings, and I was inspired to create the theater company, Wilderness. I wanted to create a piece about work and working, in one of these under-utilized buildings in downtown L.A. particularly. I wanted to do something that felt thematically connected to me and also that had a free-roaming audience, so that people could choose what they were seeing and responding to, that had an element or form of questioning, rather than simply a message relay, like A-to-B. And I had these personal questions about work and working, like “What do I want to with my life? How am I going to make a living? Is this really what I’m supposed to be doing?”

Were you also affected by the public conversation about the economy and the recession?
AS: Yes, definitely—there was the recession, and all of a sudden there was this huge public discourse about disillusionment around jobs and security and the ladder, about the system that everyone believed in.

So how did the actual content of The Day Shall Declare It come about?
AS: I wanted to use texts that were from the canon of American drama, but not something so recognizable, like Waiting for Lefty. So I went to Sam French and said, “What would I get if I put Waiting for Lefty into Pandora radio?” and the guy was like, “I have no idea. The Odets is over there. It’s alphabetical.” So I started going through them alphabetically, by title, and one of the first things I found was this collection by Tennessee Williams, called American Blues, which is a collection of five short plays. It was the first work of his ever to be picked up. “Moony’s Kid Don’t Cry,” which is the first scene, is taken from American Blues.

The whole play feels like a dream. It has a very dreamlike, hypnagogic quality.
Sophie Bortolussi: Exactly. I am personally interested in stimulating the imagination of the audience. Sometimes we get feedback that the linearity is lost, and I think that’s great. I really believe that there is space for the brain to be used in a different way. I think there is another dimension, linked to imagination, linked to dreams that can be stimulated.

What are your thoughts on breaking the fourth wall?
SB: It’s a challenge for a performer to have people in their way, and to invite them in because it is all about the audience. Being welcoming is very important. I think the discomfort exists because people don’t know what to do. Maybe they feel fear, about what they are going to be asked to do, and I understand that. When we have more practice with the audience, the actors are also going to make the audience more and more comfortable by being closer to them, but it’s interesting because it’s a real balance.

The piece ends abruptly. Is that intentional?
SB: There is this magic of imagination, and I don’t know how to end people’s imagination, or how to keep offering it. I’m really confused about how to end the journey. I’m really not sure how to end the experimentation—how to transition back to reality. People have so many expectations about theater: it’s dark, and then we clap, and then we go have a drink. I would like to keep a space for contemplation at the end of the play, because we do a lot of things to escape from discomfort. Our society has no space for that. People are very uncomfortable with unresolvedness, and I wonder why.

A Streetcar Named Desire Is Now a Ballet, and You Can See It in L.A. This Weekend

Los Angeles Artists Are Revolutionizing the Game, and You Need to Start Paying Attention