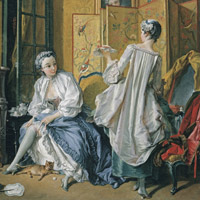 Share
Email
Facebook
Twitter
Pinterest
ReddIt
If you like costume dramas you’ll get the vapors wandering through the gilded objects in the J. Paul Getty Museum’s Paris: Life & Luxury exhibit. They’ve assembled all the accoutrements that well-heeled 18th century Parisians used in their daily lives, arranged from la toilette to dinner to the evening’s entertainment. The museum held an extremely well-attended opening this week where patrons lingered in the main lobby amid tureens of lobster bisque and towers of profiteroles. I wound my way through the tea services, paintings, writing desks, and clothing only to turn a corner and run into Louis XIV himself, actor Julian Sands (he played the monarch in the flick Vatel). He ruined me forever with Room With A View. I blame him and Helena Bonham Carter for my limited taste in movies now. I’ll watch any costume drama (many times in some cases), no matter how awful. Sands has been out and about a lot this month and the moment I happened upon him, he was chatting with his companion about rococo. It happens. Going down the steps from the gallery I got to thinking what would my day look like if immortalized in a museum years from now? My toilette? A television turned to The Today Show while I put on Bare Minerals in the morning followed by a box of cherry Pop Tarts. Take that Marie Antoinette. The exhibit is now open and runs until August 7.