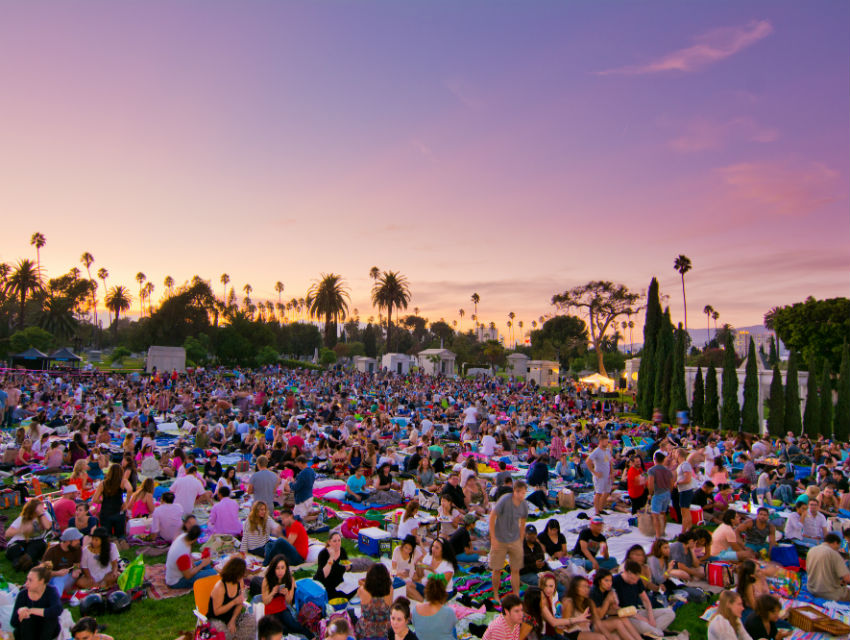 Looking back on fourteen successful seasons, Cinespia creator John Wyatt is proud of what he and his team have accomplished with the popular summer movie screening series, which kicked off on May 9 at Hollywood Forever Cemetery. “A lot of the people coming now started coming here as children,” Wyatt says. “Recently, a couple came up to me and told me they met at Cinespia. Now they have a daughter who was there with them. That was a moment when I felt Cinespia has become part of the fabric of L.A.”

The overwhelming popularity of Cinespia wasn’t something Wyatt was counting on when he set out to start an outdoor repertory theater in L.A. to share his passion for great cinema with others. “I used to have a film club where we would go to different repertory theaters around town and it grew quickly,” he says. “We had so many people coming to screenings, so I figured we could rent the movies and screen them ourselves. I had a friend at Hollywood Forever and I thought it was the perfect location.”

At Hollywood Forever they were suspicious at first, Wyatt explains, but quickly came around. “They said let’s try one. I showed Strangers on a Train. Word got out and we ended up getting a few hundred people there. After the movie the audience got up and cheered. That’s when I knew, we can actually do this.”

“This is a city that needs community and open spaces for people to gather in,” Wyatt says. He’s very clear about the fact that there’s more to Cinespia than just movie watching. “There was nothing like Cinespia around before we started. There’s only one type of ticket. Everyone is thrown together in this egalitarian way. Whether they are a starlet or a aspiring screenwriter.”

Part of Cinespia’s success is all the cool stuff surrounding the movie screenings but DJs and bands for the afterparty is just the beginning. “Three weeks ago we screened the Godfather at L.A. Theater downtown,” says Wyatt. “We showed the Godfather upstairs and recreated the Corleone wedding in the downstairs ballroom.” People showed up for the event in period appropriate attire. It’s all part of the magic that is Cinespia.

This season, Wyatt is particularly excited about screening Spike Lee’s Do the Right Thing from 1989 and the modern kitsch classic Showgirls from 1995. “I love that feeling of introducing someone to something new. That’s a film programmer’s juice,” he says. “You expose people to something they might not otherwise have known about. Bringing movies out into the open like that breathes new life into them.”

Particularly the Showgirls night sounds like an event to note on the calendar. “We’re gonna have actual shows girls and poll dancers performing that night,” Wyatt explains. “We’re gonna celebrate the movie in all its weirdness.”

“Ultimately, we want to challenge people. We want them to walk away feeling like they’ve experienced a great work of art. ”

Will a Hollywood Boycott of Georgia Help or Hurt the Cause of Reproductive Rights?