Forty years ago this Friday, Steven Spielberg’s E.T. The Extra-Terrestrial had its world premiere in Los Angeles before proceeding to conquer the known universe of entertainment. And as far as ’80s movie moms go, they don’t get much more iconic than Dee Wallace in the 1982 classic. We talked to Wallace about her role as Mary Taylor, loving but oblivious mother to three Gen X kids (Henry Thomas and Drew Barrymore, notably), hiding a stranded intergalactic botanist in the house.

Wallace got her film start as a maid in 1975’s The Stepford Wives, then had a couple of pre-E.T. parts that would launch her into the ranks of the epic scream queens: Wes Craven’s The Hills Have Eyes (1977) and 1981’s werewolf G.O.A.T., The Howling. She followed E.T. by starring in the 1983 film adaptation of Stephen King’s Cujo, about a mom trying to save her kid from a rabid St. Bernard. Now 73, Wallace is a speaker, healer, and author, most recently of the book Born: Giving Birth to a New You. She’s also still busy acting in TV and movies. Including the kind where she screams.

It’s remarkable how different it is, emotionally, to watch this movie as an adult.

Yeah. Especially if you’re a parent! It’s a heart movie. That movie transcends what other movies can’t. I don’t know if I can explain it—it reaches into what we know is the truth, and encourages us to live more of the truth. And that’s why it’s an iconic film. It will last forever. Because that truth never goes away.

The kids in E.T. are very free range—there was so much more freedom afforded to children back then. You are someone who’s done a lot of speaking and writing about kids’ emotional lives—are we going backwards, in terms of fostering children’s development?

Absolutely we are! I think the biggest thing that children today have lost is naïveté—that blind faith and trust that they’re OK in the world. Haven’t we all lost that? I was raised in a dichotomy—I was always told, “You can do anything,” and meanwhile I was watching my father become a severe alcoholic, berating my mother in a drunken stupor every night. And my mother and grandmother, these unbelievably strong, driven, loving women somehow held down the fort, raised three kids with integrity and honor. So looking back at my career, I think I attracted those parts to me. E.T., Cujo. Even The Howling is about the fight between the light and the dark. That dichotomy that we all live in. It’s always been important to me to help people heal and feel love and be as happy as they can be.

Your career had a huge boost with E.T., but you say in your 2018 Ted talk that you went into fight or flight mode with that success, that you felt you didn’t really deserve it.

I was raised in a religious family, and I can still hear my grandmother saying, “They’re rich people; we’re good people.” Which is a very old midwestern/southern take on success and money. There was one instance where I was in the car coming home from my first dance recital, which I had worked so hard on, and I burst out, “Mommy, I was good! I was really good!” And my aunt turned around with her pointer finger and said, “Deanna Bowers, you never say you’re good. And if somebody else says you’re good, you say ‘No I’m not.'”

So again, that dichotomy—”you can do anything” but don’t ever say you’re good and don’t make too much money. Cut to E.T., when I was skyrocketed to fame and everybody knew my name and upped my money and I was sitting there going, “Oh my god, I’m one of them and God isn’t gonna love me anymore.” I had to really examine my belief systems.

And this is a theme you explore in your book for kids?

BuppaLaPaloo and the I LOVE MEs is the first in a series of books that will teach children at a very early age all of those creation principles. The first book teaches a little boy that he has to decide who he wants to be. He has to start defining himself.

E.T. is a remarkably child-aware movie. One of the things I was struck by is how Spielberg shot all the adults at a child’s eye level—except for you.

Steven had a way of working with the kids that was really brilliant. He would whisper stuff in their ear, say “OK, say this line now,” which would take everybody else, including me, off balance.

Steven had a way of working with the kids that was really brilliant. He would whisper stuff in their ear, say “OK, say this line now,” which would take everybody else, including me, off balance. Because it was the first time we were hearing it.

In the dinner scene, we got to the end of the scene and Elliot says, “I can’t ask Dad, he’s in Mexico with Sally,” and I literally felt the tears coming up, and I had the thought, “I don’t want the kids to see me cry.” So I got up and left, and Steven comes over and says, “Dee, why did you get up and leave?” And I explained what happened, and in that moment he goes, “OK, everybody, you have 30 minutes, build me a kitchen set over here, I need running water to take her to the sink.” So they build that so he could pick up me leaving and going to the sink, which leads into that closeup where I say, “He hates Mexico.”

There’s another moment in that scene that seems very unscripted—when Elliot yells at his older brother, “It was nothing like that, penis breath!” and you look like you’re trying very hard not to laugh, but you do anyway. Did you know Henry Thomas was going to say that?

No—it was a really genuine reaction. If I had broken that down as an actor, I would have gone to admonishment, “don’t you dare say that in my house!” But that was Mary’s relationship with her kids, she was one of the kids, and another kid would have laughed at that. It was just an in the moment, truthful thing. That’s when the magic on set always happens. 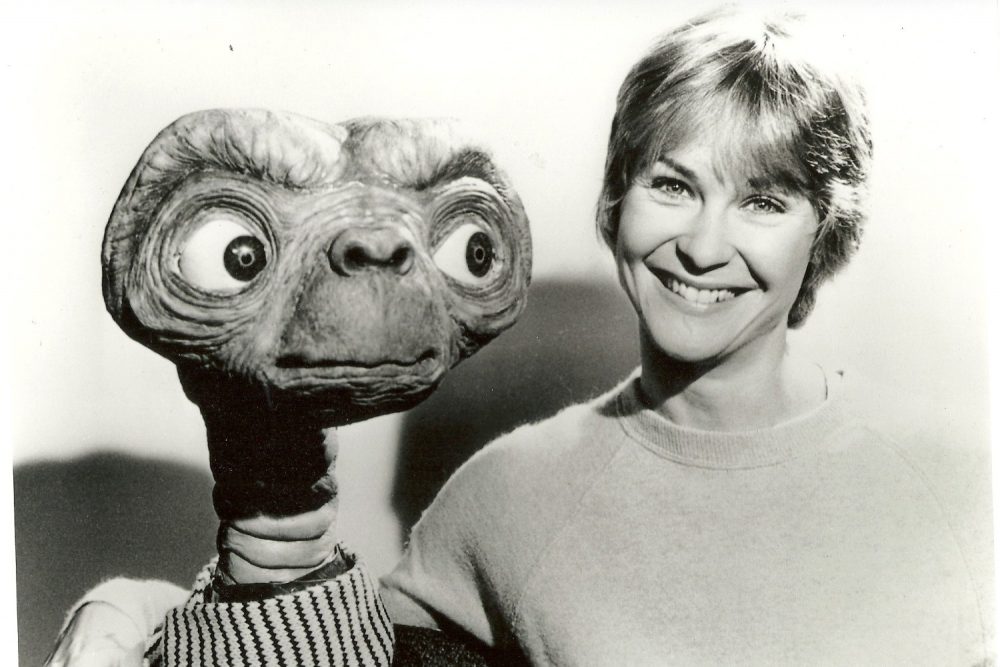 Drew Barrymore was just a guest on the podcast Podcrushed, and she was talking about her memories of making E.T. being very emotional and very joyful. Was it that way for you?

Spielberg created a very family feeling, and you know, he’s very childlike himself. He’s very enthralled with making a movie.

Sometimes. [laughs] She was a little kid who they kept E.T. alive for. Every time she wasn’t in school or filming, she was off playing with dolls or her big brothers—who were wonderful with her, by the way. When I wasn’t shooting I sat in my room. I think at one point it was three and a half weeks before I walked onto a set. So that wasn’t fun. But my time on set, with the kids and the performance? Total joy. Spielberg created a very family feeling, and you know, he’s very childlike himself. He’s very enthralled with making a movie. I think a lot of him is still that kid in junior high making movies in the backyard. It’s still got that magic for him, and that transfers to the people who work for him.

The frog scene is crazy. Is that the truth of what was going on with frogs at the time? Students vivisecting them?

Oh sure. I’m not sure they’re not doing that now. There’s that old dichotomy between creation and science. Sometimes you have to vivisect frogs to save people.

Can you tell me a bit about the 12-year-old actor born with no legs who played E.T. in the refrigerator-raiding scene?

Matthew De Meritt was this kid’s name. They put him upside down and he walked on his hands, and that’s how E.T. got his distinctive walk. He was amazing. My god, he got around that set on a skateboard faster than anybody could get around on their two legs. He would go out and play basketball, shoot baskets with the rest of them. He really is an inspiring man. He was at the TCM event, and some of the conventions, with us.

You’re known as a scream queen. As someone who speaks and writes a lot about people’s energy, is it cathartic, in an energy way, to perform those parts?

I love roles like that, quite frankly. I have a really full emotional life and I like to use it. But I’ve already, this year, done 12 projects—a rom-com, a great family film. Some of them are sci-fi, some are horror, some are Christmas films. I don’t allow the industry to limit my definition of myself.

When was the last time you saw E.T.?

I just watched it on the big screen at the TCM red carpet event. Steven had a Q&A, and we all got to see each other and party later. It was great to see it back on the big screen. I’ve seen it probably 150 times and I cry every damn time. I do! It gets my heart every single time.

6 Awesome Things to Do This Weekend, 9/4