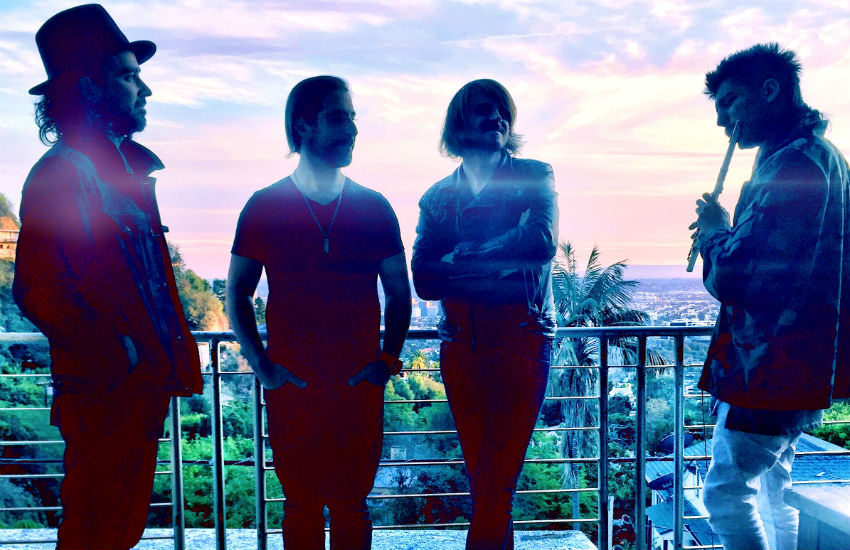 We’re proud to premiere Pluuto’s first single “Somewhere Far, Far Away” off of their upcoming debut EP. Stream it here:

Elmo Lovano shouldn’t have a business card. It simply doesn’t seem possible to sum up everything the L.A. musician, producer, and entrepreneur does—touring the world since age 16, drumming for Miley Cyrus, acting as musical director of Christina Perri’s band, heading up a weekly music and art showcase that’s hosted everyone from Skrillex to Tommy Lee, and founding a networking service for professional musicians, just to name a few. But now, he’s finally found time for a passion project with his friends: Pluuto.

A little jazz, a little psychedelia, and a little rock and roll, Pluuto resists easy categorization, largely because their songs begin as improvisations. Fittingly, Pluuto is made up of skilled musicians often sought out for the touring bands of your favorite artists.

“We’re all hired guns,” Lovano says of he and his band mates, Nick Maybury, Sergio Flores, and Kristian Attard. Their busy schedules make overlapping time in L.A. a rarity, but worthwhile when home. “Pluuto is a release for us. This is a collaboration because the four of us enjoy each other’s playing and enjoy each other as friends.”

Maybury started Pluuto as an open collaboration years ago when he moved to L.A. from Australia and played at Camerata, a weekly arts showcase in Hollywood that Lovano started and participated in for years, until touring duties forced him to put it on hold. He booked Pluuto for Camerata. The four current band members got onstage together and found an incredible chemistry there.

There is no “process” with Pluuto; all the recordings are more-or-less structured improvisations. The band put their first track, “Alice in Wonderland,” online a couple years ago. Once they’d each returned from tour, Lovano booked studio time and they recorded their forthcoming EP.

“We make these soundscapes, and people felt like they were having the emotion of watching a movie while watching us,” Lovano says. “A lot of people would say they could visually see the music while watching us, even if there were no visuals. Some people happen to see colors, which is a beautiful and amazing sense, but most people do not. It was pulling that experience out of people who’ve never experienced that before. That’s pretty much the coolest compliment I could ever be given.”

“If I can bring you somewhere, that’s the greatest thing ever,” Lovano says. “If I can take you out of your head and into a new world by performing what’s naturally coming out of us, that’s awesome.”

Because of upcoming tours and obligations for members of the band, the release show for Pluuto’s debut EP will take place in May or June at the GRAMMY Museum.