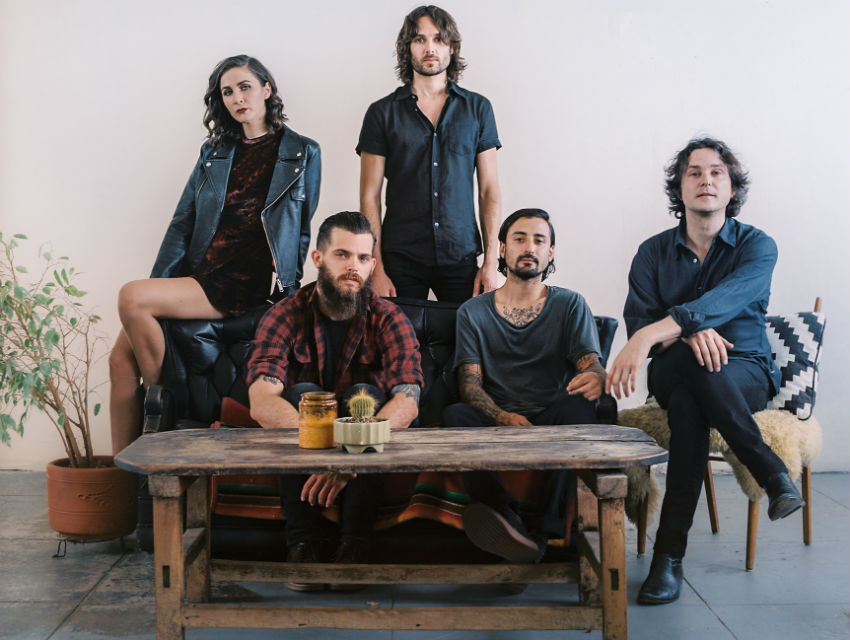 We’re proud to premiere Nightjacket’s debut EP, which will be released June 23. Stream it early here:

Jordan Wiggins was at a friend’s backyard party in Atwater Village when a voice caught his attention. Holland Belle was playing some of her solo material on an electric guitar.

“I was impressed by how beautiful and dark her voice was,” Wiggins says. “I asked her if she’d like to sing on some songs that I’d been working on, and the music and band grew from there.”

Along with friends Louie Schultz (guitar), Steve Lucarelli (bass) and Diego Guerrero (drums), Nightjacket was born. Thanks to Belle’s smooth voice and the band’s reverb-drenched guitars, Nightjacket is the sort of dream-pop music that melts your stress. Belle is a long way from her vocal origins in classical opera, but she used that training to find a distinct voice for this material.

“Although I trained classically, I always enjoyed singing different types of music,” Belle says. “Many singing styles—blues, jazz, R&B—I learned how to sing by using technical skills from classical voice. For Nightjacket, I let the tone of Jordan’s songwriting inform the singing style. What came out was a mysterious and smoky voice that really melted with the other instruments.”

“Sun in Spring” and “The Right Way To Fall” begin with staccato electric guitar that gives way to the dreamy tones and strong melodies that pervade their Eternal Phase EP. It moves between hazy melancholia and Californian breeze, evoking the atmosphere of artists such as Mazzy Star and the Cocteau Twins. Wiggins cites artists from The Allman Brothers Band, Cocteau Twins, and Tom Petty to The Horrors, The War on Drugs, and Deerhunter as songwriting influences.

“I think our music captures the feeling of night, whether it be a calm, or electricity (or both) in the span of a single song,” he says. The band’s name actually grew out of the term he used for the jacket Wiggins, a Virginia native, always needed at night in L.A., despite how hot it could be in the day. It seemed like a good fit for the music, too. “Many of the songs and key melodies were written at night, and I think that comes through when you listen to the music.”

Nightjacket will hold its EP release show at The Echo on Monday, June 22.