Home Art Everything You Need to Know About L.A.’s New and Future Museums 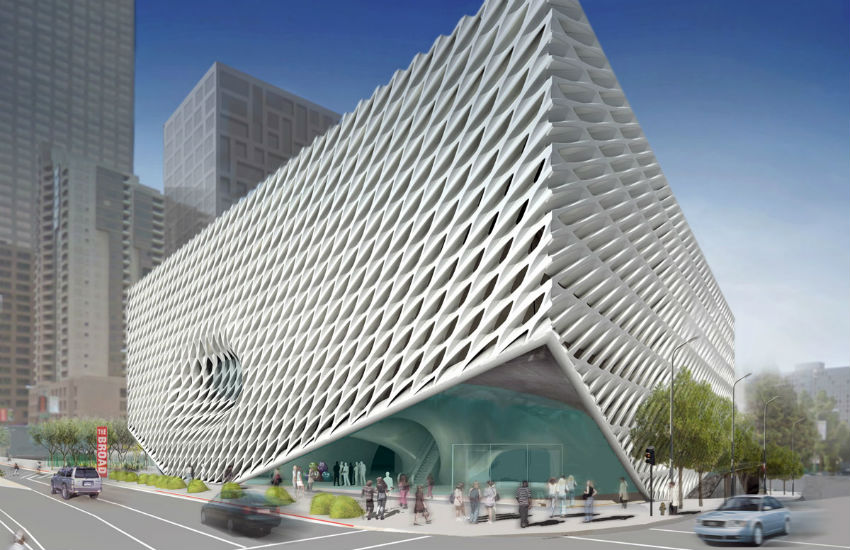 The Broad Museum will open its doors in September

Not so very long ago, venues for art in Los Angeles were somewhat limited. LACMA, MOCA, and the Getty dominated the scene, with a few significant galleries dotting the landscape, here and there. But now, with a new injection of gallery energy into central Hollywood, and the enormous and extraordinary undertaking that is the Broad, along with many other moving and changing art venues, art in L.A. is truly on the verge. As Suzanne Isken at the Craft and Folk Art Museum puts it, “There is no center in L.A.—it is a multi-action city for art.”

We invite you to stroll with us through the new exhibition wonderland for art and culture that is L.A.

The Broad Museum Scheduled to open downtown on September 20, the 120,000-square-foot, $140 million Broad Museum will house the 2,000 works of contemporary and post-war art that comprise Eli and Edythe Broad’s personal collection. Designed by Diller Scofidio + Renfro, the structure will utilize what’s become known as the “veil and vault” feature, which will “activate two-ways that connect the museum and the street,” according to Liz Diller. In addition to two floors of gallery space, the institution will also be the headquarters of The Broad Art Foundation’s worldwide lending library.

Academy Museum
Somewhat further down the line—scheduled for 2017—is the planned opening for a premier museum dedicated to the past and future of motion pictures. With a permanent collection of more than 10 million photographs, 165,000 film and video assets, 80,000 screenplays, 50,000 posters, and 20,000 production and costume design drawings, the Academy Museum will be a serious contribution to arts and culture in Los Angeles. Designed by Pritzker Prize-winning architect Renzo Piano, the museum is being constructed on the site of the old May Company building, next to LACMA.

Craft and Folk Art Museum
Ever since Suzanne Isken took the helm at CAFAM, the museum has become a “maker museum,” focusing on non-traditional folk and craft art, and bringing exhibits all the way out to Wilshire Boulevard. Recent shows include: “Man-Made: Contemporary Male Quilters,” “Focus Iran: Contemporary Photography and Video,” and “Clare Graham & MorYork: The Answer is Yes.” With a recent face-lift, and a whole new roster of programs, including poetry readings, arts workshops for military vets, and even a class on duct tape art, the Craft and Folk Art Museum is revitalized and completely worth a re-visit.

Peterson Automotive Museum
Currently closed for renovation, with a scheduled re-opening on Dec. 1, 2015, the Peterson is not only rehabbing its outsides, but also its insides: going forward, the museum will be partnering with Art Center’s car design department, to explore the vision, history, and meaning of what most Angelenos cannot live without. This is no longer your father’s Oldsmobile. Check out the website for a live feed of the construction.

Wende Museum
This special and unusual Culver City museum is home to a collection of Cold War artifacts, leading up to the fall of the Berlin Wall. In the past, the Wende has chiefly served as a research institute, with its full holdings spread out around four different locations around L.A. But the museum is moving to a new space in Culver City, and with somewhat delicious irony, the collection of Eastern European Cold War art work, films, personal histories, and archives will now be collected in what was formerly an American National Guard Armory. With a projected opening date of summer 2016, the Wende will now have real exhibition space, as well as have a very special feature: an open shelving structure, where visitors can see all the archived items through glass.

Velveteria: The Museum of Velvet Paintings
Seriously, who doesn’t want to go to the Hall of Elvis? With over 700 velvet paintings on view, put this on your must-see list. Carl Baldwin relocated his museum of velvet art to Los Angeles from Portland in 2013, bringing his personal collection of over 3,000 works. Currently available for viewing in this Chinatown museum are the Naked Lady Room, the Unicorn Garden of Good and Evil, Clowntacular, and the California Kings and Queens. Don’t miss the bathroom, which, according to Baldwin, is the best room in the whole place.

Regen Projects
After Shaun Regen opened her 20,000-square-foot museum-ish gallery space in Hollywood in September 2012, galleries in L.A. have had an eastward manifest destiny. If you decide to tour the new Hollywood gallery hotspots, definitely start your tour at Regen Projects, with its super-cool oculus skylight and current show by Raymond Pettibon, known for his punk comic ironic illustrations. Past exhibitions include Catherine Opie and Liz Larner, as well as internationally known names like Anish Kapoor and Wolfgang Tillmans.

Kohn Gallery
Don’t miss the Kohn, just around the corner from Regen on Highland Boulevard: this 12,000-foot space has three gallery spaces, as well as an external space that is planned for future sculpture exhibits. With soaring 22-foot ceilings, Kohn has played host to some the West Coast’s most important artists: Joe Goode, Ed Ruscha, Wallace Berman, Bruce Conner. Michael Kohn is a fixture in the Los Angeles art scene, and checking in at Kohn is a good way to keep current. Now showing at the Kohn: Tom LaDuke. Coming up: Simmons and Burke and Lita Albuquerque.

LAXart
LAXart, which opened 10 years ago in Culver City, relocated in January to its new 4,000 square-foot space on Santa Monica Boulevard. LAX is unique for both its non-profit status and for its commitment to risky work and creating dialogue between artists, curators, and the community. Currently on exhibit: Rob Reynolds, “Vanishing Points.”