Home Art Everything You Need to Know About That Yayoi Kusama Exhibition at the... 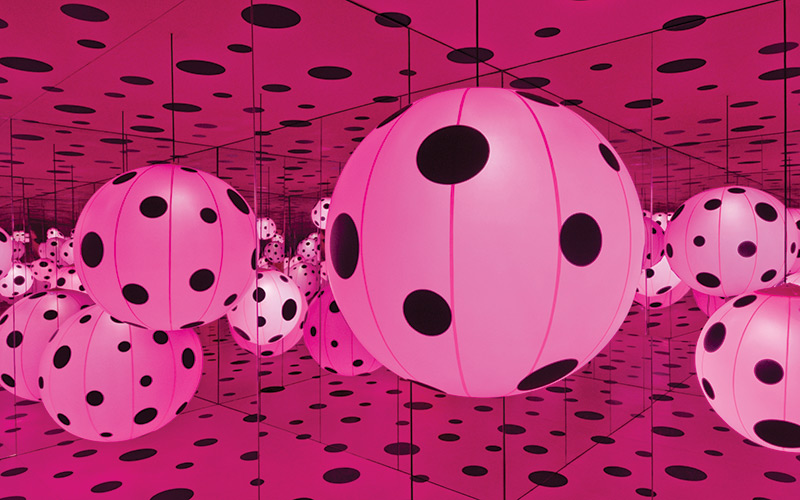 Eli and Edythe Broad prefer their art with a side of showmanship, as evidenced by the selfie-centric pieces ensconced within their namesake museum. But one installation has captivated the masses unlike any other: Yayoi Kusama’s Infinity Mirrored Room—The Souls of Millions of Light Years Away. More than 300,000 people have passed through the shimmering LED display since the Broad opened its doors in 2015; half as many would be lucky to score entry to Yayoi Kusama: Infinity Mirrors (opening October 21), an exhibition that brings five of the artist’s kaleidoscopic chambers together for the first time, plus paintings, sculptures, a living room covered in stickers, and more. Tickets went like hotcakes in September, but more will be released on October 2 at noon.

Born in Japan in 1929, Kusama has been plagued by neuroses for most of her life (she lives by choice in a Tokyo psychiatric institution). As a child, she hallucinated sweeping fields of dots, using art to calm the chaos in her mind. After moving to New York in 1957, she created her Infinity Net paintings—canvases filled with minuscule mesh-like loops. (Back then the works sold for $200; in 2014, one went for $7.1 million at auction.) Stylized dotted works followed, including 1965’s Phalli’s Field—her first mirrored room and one that has been re-created for the exhibition at the Broad. Since then, Kusama has made 19 more rooms, each a self-contained universe that reflects her obsession with repetition.

Infinity Mirrors stops at the Broad for ten weeks after stints in Washington, D.C., and Seattle, where record crowds waited hours to glimpse a glittering slice of Kusama’s psyche. Tickets for the L.A. engagement went on sale September 1, but standby tickets are released each day. Social media has given Kusama particular relevance in the here and now, though she hardly could have predicted the extent to which her work would beguile new generations. It makes her “prophetic”—and enduring, according to the Broad’s founding director, Joanne Heyler. “In the infinity rooms you have the sensation of feeling tiny and vast,” Heyler says. “There’s something about that paradox that resonates.” Heyler gives us the skinny on all the infinity rooms you’ll see:

“Love Forever relates to aspects of the 1960s, including the sexual liberation, antiwar, and civil rights movements. The hexagonal room is mirror-lined both outside and in and has peepholes.”

“In addition to a mirrored chamber, this artwork transforms the gallery space into an immersive environment with vinyl balloons.”

“Golden lanterns flicker inside a dark chamber. It resembles the Japanese tradition of toro nagashi, a ceremony where paper lanterns float down a river to guide spirits.”

“Made in 2016, this artwork combines two of Kusama’s famed motifs: pumpkins and dots. She presented her first infinity room featuring pumpkins at 1993’s Venice Biennale.”

“Visitors apply dot stickers to a pristine white space, which accumulate during the exhibition.”