Home Art Everything Is Terrible Is Saving the VHS Tape While Saving Us From... 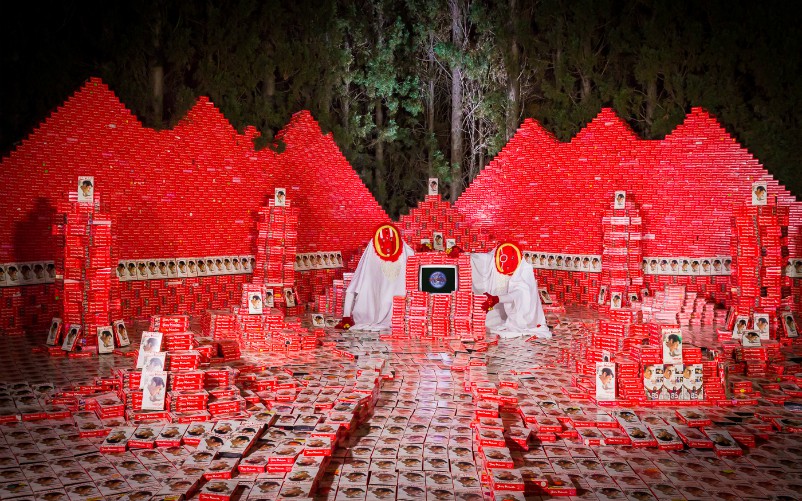 Courtesy Everything Is Terrible

It’s 2018 and everything truly is terrible. But Los Angeles-based found footage collective Everything Is Terrible‘s latest movie is a welcome reminder that things have always been a little bit awful.

You can decide what’s more disturbing: clips from a totally ridiculous 1980s horror movie about rich people turning into an amorphous fleshy mass and consuming unwitting poor people or clips from a dead-serious early ’90s VHS tutorial that coaches Christian men on how to convince their wives to breastfeed. (“Breastfeeding in public—tell her it’s a fashion statement!”)

“The goal of Everything Is Terrible in general is to make you laugh and have a good time all the while knowing there’s a monster right behind you,” says Dimitri Simakis, who cofounded EIT ten years ago with Nic Maier.

The Great Satan is the collective’s seventh feature-length film, and it’s the culmination of thousands of hours spent sifting through clips and constructing a narrative that loosely outlines the birth and eventual destruction of humanity. It’s an ambitious project, but they’re used to those. Besides posting a scrap of found footage to their video channels once a day every weekday, Simakis and Maier recently created a remake of Alejandro Jodorowski’s Holy Mountain using nothing but dog footage (it’s called DoggieWoggiez! PoochieWoochiez!) and they’re currently in the process of figuring out how to construct a pyramid in the desert using their collection of approximately 15,000 Jerry Maguire VHS tapes. (Some of those cassettes were utilized to create the Jerry Maguire video store EIT set up in L.A. early last year.)

For the past two months, they’ve been touring the country with the film and its accompanying live show; the tour wraps up on Wednesday with a show at the Regent in downtown Los Angeles.

When EIT began touring with its found-footage films, Simakis says the complication was explaining to venues who and what they are. “It’s this very confusing world we’re in—are you a comedy group? An art group? No one knew exactly what we were,” he says. During their first tour in 2010, they mostly stopped at DIY spaces and vintage movie theaters with cool programmers. In smaller cities, they still visit the latter, but now they’re selling out places like Lincoln Hall in Chicago and the Bell House in Brooklyn. Now that they’ve established who and what they are—essentially by creating a genre of entertainment—a more pressing issue is the increasing scarcity of the ill-respected VHS tape. Ideally, low demand would mean there’s more for them to scoop up; instead an utter lack of demand has meant cassette tapes are being wiped out altogether.

“It’s honestly so depressing,” Simakis says. “We talk to people who work at thrift stores and they’ll say, ‘We literally incinerate a hundred tapes a day.’ It’s a video holocaust. People see them as junk. They’re not junk, but they’re not collectors items either.”

To find new VHS material, they’ve had to get creative. Touring has helped since it allows them to visit thrift stores all over the country (the South is particularly VHS rich), and Simakis says he imagines they’ll have to start looking in places like estate sales.

Ultimately, their goal is to start a VHS archive, a thing that doesn’t seem to be a high priority, even in entertainment-obsessed Los Angeles. “There’s such a love of and obsession with film and film culture [here in L.A.], but no one talks about VHS preservation, which is also super fragile,” Simakis says. “It’s so disrespected and seen as garbage. If we don’t find this stuff, nobody will.”

Watching The Great Satan, it’s fair to wonder if some of the source material is truly worth saving. In one video, an older woman with glasses and a perm tries to prosthelytize a baby by shoving a Bible at him and saying things like, “You love your Bible, don’t you?” In another video, a cartoonish Satan figure asks a minion for an update on his favorite pet projects: abortion clinics and television violence. But if we don’t reckon with our creepy, confusing media upbringings, perhaps we’re doomed to inflict them on our own children—only this time it’ll all be on DVD.

RELATED: Cult Icon Mink Stole Explains Why She Doesn’t Think of Divine as a Drag Queen

At a New Storefront in East L.A., Everything Is Terrible