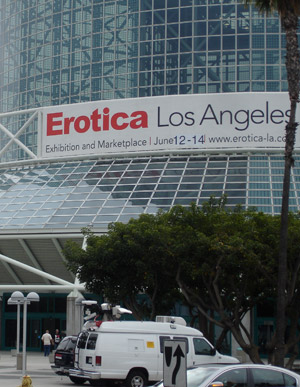 A couple of weeks ago I had the pleasure of attending the Erotica Los Angeles expo in the Los Angeles Convention Center downtown. Open to the public for a modest entry fee ($35 per day), the sexual marketplace/gawker’s paradise was a Tom’s peep at the adult industry in L.A.—one that reminded me, believe it or not, of the lessons my parents taught me:

1. You Are What You Wear (And What You Don’t)
While the expo has a strict code of decorum prohibiting any actual nudity (plenty of models wore “pasties” and videos on screens censored genitalia), there were still plenty of starlets posing for pictures with fans who were so scantily clad they would have been cold even at the beach. Sexy, at an erotica convention.

2. A Good Host Goes the Extra Mile
The expo housed a marketplace with hundreds of stalls in the Convention Center’s south hall, but what made the expo manageable was a large stage at the back of the hall where hourly stage shows kept guests entertained. Which leads to…

6. What You Give Comes Back Tenfold
The adult industry is not without a sense of charity. Several of the booths in the marketplace were aimed at raising money for various causes. Actress Kyle Reese even opted out of signing autographs this year to help her friend at a charity booth—and found it more fulfilling.

7. It’s Never Polite to Stare
Okay, momma got one wrong. This convention is all about staring: from the menagerie of attendees (my favorite was a heavyset man in a raiders jersey, kilt, knee-high boots who carried a cat o’ nine tails at his hip), to the hundreds of starlets signing autographs and selling products, the adult entertainment industry was on display, kinks and all. It will be again when the Expo returns next year. Hey, you can’t brush up on social mores too often.