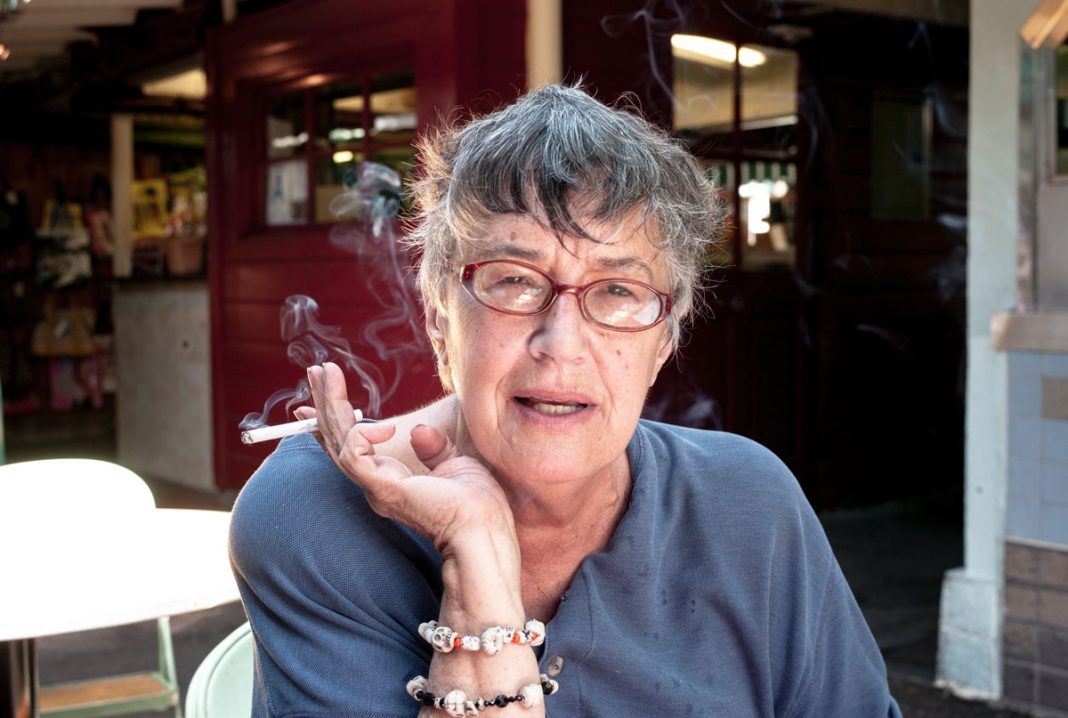 Like many things from the drug-soaked, sex-crazed 1970s of L.A., Eve Babitz is having a resurgence. The original artsy “It” girl—who first posed nude at 20 while playing chess with Marcel Duchamp; carried on affairs with Harrison Ford, Steve Martin, Annie Leibovitz, and Jim Morrison; and popped pills aplenty—never got her due as a writer in her heyday. But in recent years she’s been rediscovered by literary bloggers and millennial feminists. New York Review Books Classics has rereleased several of her collections, most recently I Used to Be Charming, whose titular essay documents Babitz’s notorious 1997 driving accident that scorched the lower half of her torso.

Last January, Vanity Fair editor Lili Anolik published a juicy biography on Babitz, and next year Hulu will run L.A. Woman, a show based on her canon and produced by Amy Pascal and Elizabeth Cantillon. After all these years it seems Babitz is finally the literary “It” girl she always thought herself to be. Here the 76-year-old, who lives a hermetic life in West Hollywood and almost never talks with the press, dishes to Los Angeles.

Before New York Review Books Classics began to reissue your work in 2015, you weren’t taken as seriously as a writer as you were an “It” girl. Why was that?

I don’t know. I always took myself seriously as a writer. I suppose it took 40 years for the world to catch up with me. I like being an “It” girl as well, although I prefer the writer category and had the pleasure of being one for over 30 years.

As an essayist and novelist, you chronicle a young woman in 1970s L.A. who loves partying and sex over anything serious. Was that a character you created—or actually true?

I think it’s probably both​. ​My friends that I wrote about said that I created a character that was sort of them—and I think I did the same thing with my own character, changing my name and some facts about myself. Writing is hard! Partying seemed easier, at least at that time.

There’s deep nostalgia now for ’70s L.A. bohemia. Why do you think that is?

[It] was an exotic time for all of us who were there. … It was a time of freedom and, seemingly, little consequence. … ​I did say “seemingly.” We found out later there were plenty of consequences. … But everyone was having sex, taking drugs, listening to or making great music. There were no words like “trigger” or “PC.” If you didn’t want to join the party, you​ took yourself home, and you were responsible for doing that.

How do you feel about millennials, like actress Emma Roberts, adopting you as a “feminist hero”?

It makes me happy. I don’t totally get it, but it’s thrilling to be a hero. I’m humbled by it.

You went from sex, drugs, and rock and roll to what The New York Times described as a political conservative and supposed MAGA hat owner. What brought this change about, and where do you stand now?

I never talk about politics. … Although I was so happy [when] my friend Linda [Ronstadt] was going out with Jerry Brown.

You wrote a memoir before it was a best-selling literary genre. Do you take any credit for helping it become one?

No, that would be a stretch.

All of your writings contain what the press calls “unabashed hedonism.” We’re living in an antihedonist moment now: political correctness and Twitter quash humor/sarcasm/sexual jokes. Sobriety’s rampant. If your books debuted now, how do think they’d go over?

I can’t imagine, and luckily I don’t have to! Also if I were writing now, I doubt the books would be the same. After all, my sobriety is rampant, too!

What are you currently doing with your time?

I see my friends; go to [AA] meetings. I am gratefully sober. I read all the time: books, magazines, everything.

Literary critics refer to your writing style as “fizzy,” effortless, spontaneous, dishy. They make it seem as if it was so easy. Was that really the case?

Mostly it was hard to​ find my way through all the extra words to just the right few to make it seem and feel easy for the reader. Being serious and meeting deadlines—that was hard for me. I was always happy when my agent and publisher liked the work. It felt like I had accomplished something, and that’s a great feeling.

Did any of your lovers ever complain about being portrayed in your work?

Not to me; maybe they complained to others. Some complained that they weren’t included. ​Paul Ruscha was probably the person I featured the most, and he always knew what I was going to say. My sister [Mirandi] occasionally got really mad at me over things I wrote about her.

What would you like your literary legacy to be?

I never thought in terms of legacy. When I published my books, I was proud ​to see my work out there, and I worked hard on the cover art, etcetera. Some people liked them, some didn’t, and I thought that was that. So this whole rediscovery is a bit of a shock for me. I would like my books to last. I would love to have a course taught at universities on the writings of Eve Babitz, but that also seems out of reach.

No doubt a clichéd question, but do you have any regrets?

Regrets are hard things to have and then hard things to let go of. … But, in the end, they are a waste of time. You can’t do anything about them. And, at this point in my life, carrying them around would be exhausting. People always ask if I regret the accident. I think being grateful is an easier way to get through the day,​ and with the odds being stacked against me for even surviving the accident, I am grateful just to be here at the odd age of 76, living with this happening about my work.