Home Art This Photographer Is the King of Capturing L.A.’s Lowrider and Street Cultures 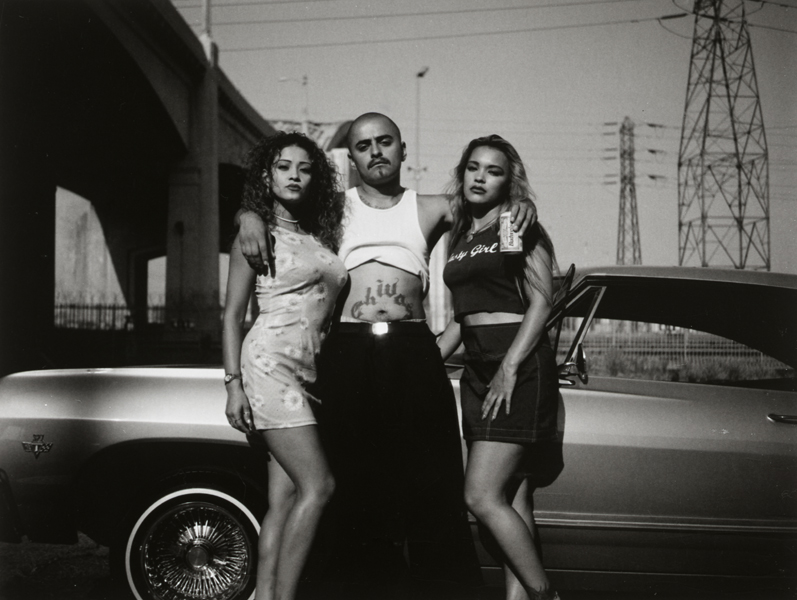 Estevan Oriol’s work is filled with contrasts. Portraits of Al Pacino, Kim Kardashian, Dr. Dre—those familiar faces of Hollywood’s elite—sit alongside snapshots of a lesser known L.A.: Chivas gang-members, a lowrider club from the Eastside, a close-up of a Head Hunters tattoo. But despite the major differences between his subjects and the environments he photographs, Oriol’s work is instantly recognizable. You can attribute it to the physical nature of his shooting style, the rich, high-contrast black and white portraits shot against distinctively urban landscapes. But beyond the physical likeness, Oriol’s photographs share a similar consciousness. An insider’s slant. People we’ll never meet and circles we’re unlikely to enter open up in front of his lens; secluded worlds are made familiar and relatable even in their foreignness.

Born and raised in Los Angeles, the world renowned photographer began shooting L.A.’s street culture in the early ’90s. He photographed what he knew and the communities he was a part of: lowriding clubs, Chicano street culture, touring hip-hop bands, the urban L.A. that was so often misrepresented and demonized by both the media and entertainment industry. Oriol’s humanizing portraits of the city’s underbelly and his hustler attitude earned him a devoted following, which soon translated into a bonafide photography career. High-paying shoots with Hollywood’s highest paid began rolling in. Yet despite the success, recognition, and accolades, Oriol’s shooting style has kept its distinctive rawness through the years.

We spoke with Oriol about his endless devotion to L.A., life as a lowrider, and the secret behind his photographic style.

I was born a long, long time ago at St. Johns Hospital in Santa Monica. During my youth I grew up mostly on the Westside. At that time, there were a lot of different cultures coming up for the first time or becoming popular more than ever, such as surfing, skateboarding, punk rock, hip-hop music, break dancing, graffiti, new wave, Lowriding, and gang banging.

At 18, I moved to Hollywood and did construction and worked the door at nightclubs. In ’89 I met Muggs from Cypress Hill, and in ’92 he gave me the job tour managing with House of Pain and in ’94  tour managing for Cypress Hill. With all that and joining a lowrider club in 1994, I was one of the only people in my circle that had a camera with me all the time, so I had to do it. I got a lot of photos of lowriding. There weren’t that many people that owned lowriders and that were photographers. When I was on tour, I got a lot of photos of the hip-hop world and all the traveling. So I have a decent collection of photos from the ’90s, of course not as much as I’d like to [have].

When did you first start photographing?

My dad gave me my first camera and got me into photography. At the time he gave me an all manual Minolta 35mm camera, and I also bought a small portable panoramic camera and a Polaroid land camera. I would shoot with all three because they all had different looks. In 1997, my friend Martin gave me an 8mm film and that created a whole new monster in me. In the beginning I didn’t feel comfortable carrying around cameras, so I would only take them out in my environment, which was lowriding and touring. After a little time, that all changed, and I was able to shoot anything anywhere.

How does it feel seeing the landscape of L.A. change so drastically? Do you feel that the L.A. you grew up in still exists?

I like the way the old-school L.A. looked better for photographs, but the city has to grow and change with the times. I still try to shoot in the places that haven’t been touched or gentrified. At the speed everything is being built out and changed, in ten years it will all change again. It’s hard getting your eyes used to it and figuring out ways to make it look good for my style of photographs. That’s one of the big reasons I like traveling so much is because other places haven’t changed as fast and as much.

Lowriding was a big part of your life growing up. Can you describe what the culture was like back then when you first started shooting?

I bought a 1964 impala in 1989. In 1991 my good friend Donnie Charles helped me strip my whole car in the street in front of my apartment in Hollywood on Las Palmas. At the time I also had a little work truck that we put all the parts in to take to drop off at all the different shops to be redone. When the car was done, I joined my car club in East L.A. in 1994. My pops gave me the camera and that’s how I got into shooting the lowrider community, shooting my car, my friends’ cars, and car shows. That’s how I got used to asking people to photograph them and their cars. I learned a lot about lighting and colors, trying to shoot the paint jobs in the best lighting to show the most detail and get the most vibrant colors.

Your photos feel so authentic, raw, and intimate. What do you think enables this honesty to shine through so powerfully in your work?

Gaining the subjects trust and respect. You have to be respectful of the people and environments you choose to shoot in. In some of the places I shoot in, things can go wrong real fast and real bad.

Your father, Eriberto Oriol, is a respected artist and photographer as well. How did he influence you?

My mom and dad divorced when I was three, so I got the standard visits on holidays and summertimes with my pops. He always had me around the arts and nature. We would either go to the beach, the mountains or to something that had to do with art. He always encouraged me to do art, but I never saw myself being an “arteest,” so when he gave me a camera, I didn’t see it, but he did. At that time I was tour managing House of Pain, traveling the world on tour, and building my lowrider and taking it out lowriding with my car club, mostly around East L.A., Hollywood Boulevard, Whittier Boulevard, Crenshaw Boulevard, Bristol Avenue, Elysian Park, and shows. He thought it would be cool to document both those parts of my life, so I did. Even to this day, he still does influence me. I still see photos he does, and say to myself, “That’s a badass photo.” He’s really good out in the streets. He has great archives of homeless, downtown life, the rain, and the Metro miners that built the underground train system and all of the graffiti he’s documented.

You’ve been lucky enough to travel all over the world, but L.A. remains your homebase. What is it about this city that keeps you coming back?

L.A. is part of my DNA—it’s in my blood. I have lived in other cities and countries for short periods of time, but there’s no place like Home. L.A. has a lot of things other countries and cities don’t have. We have a lot of conveniences here that are taken for granted. You can get anything you want at anytime of the day, 24 hours. There’s a certain energy here I haven’t felt anywhere else.

What’s been the most rewarding part of your career?

There’s been many rewards. First and foremost, being able to do something I love to do and support my family from it. Traveling the world with family, friends, and clients. Having books published on my work and being exhibited in galleries and museums all over the world. Getting respect from my peers and all the people that support me.

RELATED: An Inside Look at the Lowrider Culture of East L.A.