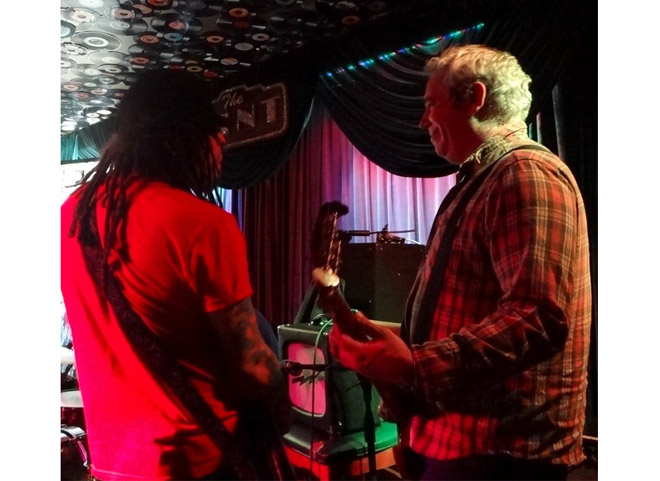 McFadden, speaking in a deep, Vin Dieselish croak, sporting a headful of dreads, and wearing a red Fishbone t-shirt that proclaimed, ‘fuck racism,’ led off the evening with a quick acoustic set that highlighted his nimble fingerpicking — think Doc Watson and Django Reinhardt after a coffee-drinking contest — particularly on the sped-up sea chantey “Sister Maggie.” Accompanied by the laconic, bearded artist Norton Wisdom, who improvised drippy gothic scenes on a lit canvas to the side of the stage, McFadden led Seth Ford-Young (currently bassist for buzzworthy hippieniks Edward Sharpe & The Magnetic Zeroes) and A-list session drummer Curt Bisquera (played with everybody) through a set that varied from gypsy folk and punk-jazz to slowcore metal and surf-guitar exotica. (Highlights: a slow-burning cover of Bob Dylan’s “One More Cup of Coffee” and a mournful callout to the late songwriter Vic Chesnutt.) Then, like some rock-club diorama of The Last Waltz, came a parade of special guests that included bassist/vocalist Abby Travis, guitarist Nels Cline, and bassist Mike Watt.

Cline and Watt, both of whom  are past collaborators with McFadden, were the honorable sensei of the evening. (“Yep, we drove all the way up from San Pedro,” joked McFadden, a nod to Watt’s old band The Minutemen.) Cline sat in on the frenetic “Tick Tock.” It’s “the first time we’ve played this song since we recorded it once like 40 years ago,” McFadden noted. Then both guitarists set to destroying the tune in a dueling facemelt that saw the other band members fall silent as Cline extracted abstract squiggles and dog-whistle shrieks from his Fender Jazzmaster. The band returned returned for a shrill, ’80s time capsule run at The Sounds’ “I Gave My Heart to Rock & Roll,” where Cline dutifully and hilariously spun out a letter-perfect MTV-era pastiche worthy of Journey or Night Ranger.

Next came the garrulous, grinning Mike Watt, who knocked out a killer if shambolic coda of The Stooges “Fun House” and “TV Eye” as well as his own memorably titled “Piss Bottle Man” and The Minutemen warhorse “Jesus & Tequila.” The encore? A ten-minute sweat-out to Funkadelic’s “Maggot Brain,” of course.