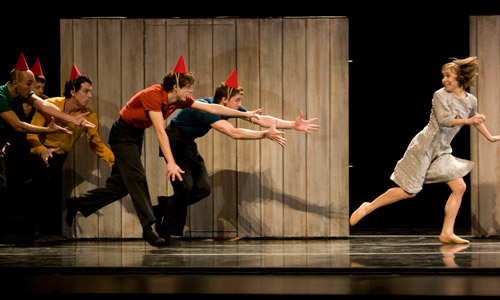 Audience loyalty to Hubbard Street Dance Chicago is as strong as the company is spirited. For a recent performance at the Ahmanson Theatre, a couple originally from the Windy City had traveled from Palm Springs to experience the show. Standing ovations midway through the evening were not uncommon. And the crowd left starry-eyed, having witnessed three sets that mixed sorrow and joy, drama and subtlety, athleticism and romance. Yes, the emotional pull was overwhelming; the choreography, intricate and sophisticated. You could see why the contemporary group, founded in 1977, has gained such a following.

The first piece, Tabula Rasa, from Ohad Naharin of Batsheva Dance Company, explored themes such as connection and loss. Couples united and then fell apart. Or they zigzagged in every direction, chaotic forms whirling through space. In another segment, time slowed—literally—as the dancers crossed the stage at a glacial pace, rocking back and forth in a single line. The robotic, rhythmic movement was almost maddening to observe, but in the end, human interaction (at least somewhat) prevailed.

The middle program, 27’52”, by the Czech choreographer Jirí Kylián, opened with the dancers seemingly warming up onstage, with the house lights still on. It was as if we were witnessing something we shouldn’t have. Then words came over the sound system: “The artist’s expression is his soul made apparent.” As the piece progressed and the lights dimmed, the cast virtually revealed their naked selves: bodies contorted, agitated, tense, raw, vulnerable. Recorded words (in French? in German?) played forward and backward; the score was a cacophony of broken glass and clanging metal.

The final performance, Walking Mad, was choreographed by Johan Inger, formerly of Nederlands Dans Theater. Here the cast could let loose, with a production at once fun and energetic, comedic and theatrical, and set to the catchy drumbeat of  “Boléro,” by Maurice Ravel. The dancers—alternately in bowler hats and trench coats or children’s party hats, primary colors, and frocks—explored love in all its variations: raunchy, innocent, playful.

We’re not alone in hoping they come back for more.