Home Music East L.A.-Bred Empress Of Is All About Letting Her Community Shine 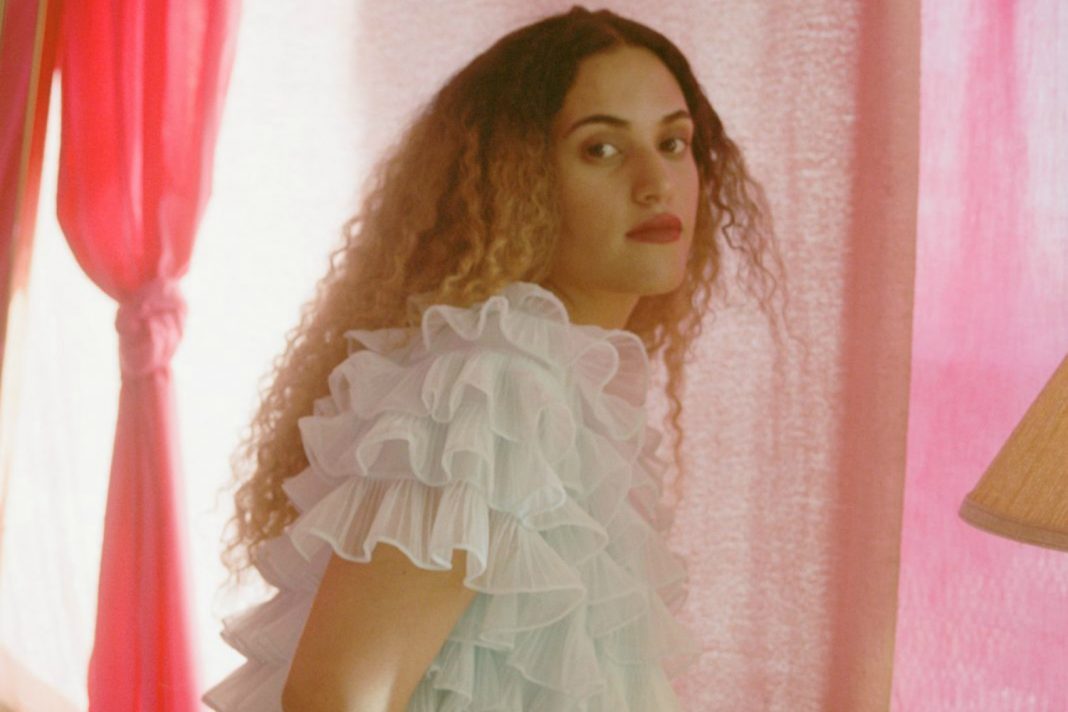 For her 2015 debut, Me, Lorely Rodriguez—better known as pop songstress Empress Of—skipped town for Mexico and isolated herself for weeks to single-handedly write, record, and produce the album. On her latest record, Us, she took a different tack, instead finding the beauty in collaboration and letting the community of East L.A. guide the way.

“Collaborating is something I do naturally. Right now is not the time to be alone—everything in the world is so chaotic and heavy, so I needed to bring people into my process and lift me up, even emotionally,” Rodriguez said in an interview with Vogue last year.

The first-generation Honduran-American first gained attention back in 2012 after anonymously releasing Colorminutes, a series of 15 one-minute-long demos accompanied only by a solid color as artwork, on YouTube. She followed up Colorminutes with Me, and now Us, released in October of 2018, for which she enlisted collaborators like Dev Hynes of Blood Orange, duo DJDS, Cold M.G.N., and Pional. Lyrically, it’s brighter than Me. “I want to show you how to love, Hate can be an empty drug, I’ve got love, Running through my fingers in my bones,” Rodriguez sings on “I’ve Got Love.”

After isolating herself emotionally and physically for the first album, she now wants to do anything but. She’s currently on the West Coast leg of her U.S. tour with friends Salt Cathedral and Saro opening (they’ll be in L.A. at El Rey Theatre on Saturday, March 9).

The daughter of immigrants from San Pedro Sula, Honduras, Rodriguez is proud of her roots and the community she calls home. Her self-directed videos “I Don’t Even Smoke Weed” and “When I’m With Him” are love letters to East L.A. and her friends. That love translates to her personal style, which she says is an embodiment of where she grew up, including the oversized T-shirts and hoodies she’s often photographed wearing, designed by her friends, the design duo Kids of Immigrants. She also creates her own designs, brought to life by her mother, who she calls the Latina Knowles.

Ahead of her U.S. tour, we talked to Rodriguez about becoming secure in her sound, her childhood influences, and how her friendships inspire her.

You recently moved from New York back to Los Angeles—what brought you home?

Empress Of: I lived in New York for a couple years and I had just released my first album and I was just feeling like there wasn’t much reason for me to live [there] anymore. I just wanted to be close to my family, I wanted space. Being on the West Coast where I grew up is something that’s really important to me.

Your first studio album focuses a lot on your personal journey with love, heartbreak, and life. You also did it all on your own. How was the process of creating your latest album, Us, different?

With the first album, I felt like I really had to develop myself as artist, my songwriting and my sound as a product, so I was trying to preserve that and really isolate myself and not work with other people because I needed [to be in control] of what I sounded like as a vocalist, as a songwriter, and a producer. For my second album, I felt like I didn’t have to go through that same process again. I also like living in L.A.—there’s so many artists here with [accessible] studios and I was already working on other projects with people. I was on the Blood Orange album, so collaborating was already in the process for me. I just wasn’t as scared to protect [my album], I had confidence that whatever I did as far as collaborating, I could still be able to retain my sound.

What was the most important thing you learned from collaborating more on Us?

It was just knowing when something something is working for you and when it’s not. It’s like curating a show at a museum, you’re very careful about the pieces that you put in because you want it all to tie in together and make sense so that’s kind of the biggest thing I learned.

What did you listen to growing up?

In your music videos for “I Don’t Even Smoke Weed” and “When I’m With Him,” your whole video production is really amazing. You feature people of color and communities who haven’t been mirrored back at us until recently. Are you intentional about representing these communities and having them be a part of your music videos?

Aside from being an artist, like, just being a brown woman, I feel really good when I see other brown people in these ways–when I see them modeling, acting, or performing, or even producing, directing–it just makes me feel really good. And I wanted to do that [with my videos], I wanted it to just feel real. When I go hang out with my friends, that’s what it looks like, you know?

As a Honduran woman, how does it feel to be making a change in the music industry and breaking ground in the pop genre?

That’s one of the biggest things I feel I can do, is just represent my experience so other people who are Central American can see themselves represented in me and to be like, “there’s no doubt in my mind [I] can do that” because they already see someone else doing that. I didn’t have that growing up, the closest thing to that would be Selena. But now, there’s so many people who are representing us. It’s really important to do. But as a Honduran-American, I’m always really surprised and it’s dope to see other Honduran-Americans doing it too because it’s hard to be in the arts in the first place. A lot of people who come from Honduras, they come out of desperation or to seek better opportunities, so you really have to be good at what you do to be an Honduran-American in the arts. It’s a luxury, you know what I mean?

In recent months, the Central American community has gone through a lot. As a part of that community, how do you cope during times like these?

I just surround myself with things that make me feel inspired. Like my friends, who are creating things, whether it be music or clothing…. for example, my friends from Kids of Immigrants, I just get really inspired by them because instead of focusing on how negative it could feel, their clothing line inspires you to support your friends, spread love, and I love those messages. It’s focusing on the positive. And that type of imagery makes me feel really good.

Speaking of inspiring messages, “I’ve Got the Love” feels like the most empowering song from your latest album. Can you speak more about the song’s meaning?

I wrote the song for my friend who had really bad depression and wanted to commit suicide, and when he told me…in the moment, I didn’t know what to say. It felt like in that moment, you don’t want to say the wrong thing–but what is the right thing to say? So I just wrote this song and I played it for my friend and I was trying to capture the feeling of when you feel helpless, I’m there for you.

So what city are you most excited to play and what can fans expect from your tour?

Based on this interview, I’m going to say I’m very excited for Los Angeles. I am, though. I’m playing at El Rey, which is a big room for me, and, you know, I grew up here. I’m playing with Salt Cathedral, I went to college with them, so traveling across the country with them I feel like is going to be hilarious. I’m excited to see them play every night and I’m excited to play every night. Playing the new songs is going to be so refreshing.