Home Music Emo Nite Is Throwing the Emo-est Party Ever 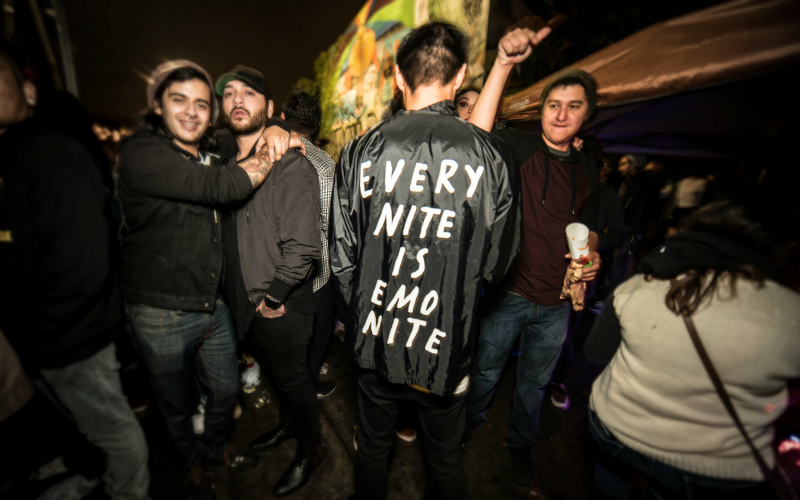 The people behind Emo Nite L.A. know how to throw party—they’ve organized hundreds of Emo Nites in more than 30 cities—and this weekend, they’re throwing their biggest event yet. Sunday, December 3, 2017, the delightfully oxymoronic Emo Nite Day will take over the Shrine Expo Hall (665 W. Jefferson Blvd.) from 2 to 11 p.m.

“It’s our three-year anniversary, and every year, we try to do something that’s bigger and better than the year before,” says Babs Szabo, one of Emo Nite’s founders, adding, “We haven’t done one in L.A. that is all ages, so I think that’s something really cool this time around, because a lot of people that aren’t 21 haven’t been able to go to Emo Nite in L.A.”

The festival will feature live performances by The Used, Machine Gun Kelly, Tigers Jaw, Movements, Craig Owens (Chiodos), and many others. From First to Last, Vic Fuentes (Pierce the Veil), William Beckett (The Academy Is), and Fil Thorpe-Evans (Neck Deep) are among the DJs. The event will also include rappers from SoundCloud, surprise guests, art installations, and food trucks.

“The biggest draw is that it’s not just DJs, it’s not just bands. We try to make it an experience, and try to make everywhere you go, everywhere you look—every aspect of it—entertaining. Even if you aren’t a fan of the genre, hopefully it’ll convert you,” says fellow founder Morgan Freed, who sees good things in Emo Nite’s future. He says, “We’ve found a very cool community, and however we can keep making this community stronger in a positive way through Emo Nite, we’ll probably just do whatever that looks like, and keep it fun.”

RELATED: This Gorgeous Vintage Masonic Lodge Is About to Be L.A.’s Next Big Concert Destination