Home Awards Watch Emmy Watching Parties: Why Aren’t There Any? 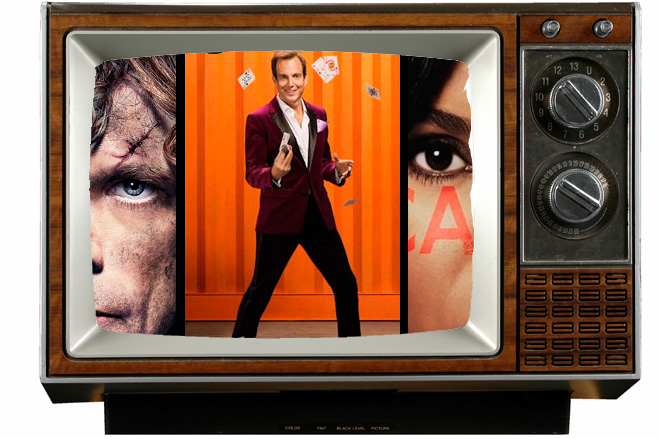 Television is the new cinema, the new rock and roll, and the new black. Go ahead, ask anyone you know if they’ve seen anything good lately. Chances are they’ll gush about whatever cable show(s) they’re hooked on or recount the details of the latest drama they’re power-watching. If TV has supplanted film as the visual medium of the day, why do the Emmys lag so far behind the Oscars when it comes to viewing parties?*

Major Theorem
Even with all those viewing options—DVR, Netflix, iTunes, Amazon—many people still think of the movies as something you go to. Television, by contrast, has always been watched in the privacy of one’s home.

Minor Theorem
The Emmys are sorta stodgy; they haven’t caught up with pop culture or begun to understand how cool they could be.

Conclusion
While every neighborhood bar and watering hole seems to roll out the red carpet for the Oscars, no one cares about the poor, orphaned Emmys.

What’s a TV fan to do? Throw your own party.

Here are the three essential tips for throwing a proper Emmy shindig, although really, these are basic life skills that should be as fundamental as knowing how to tie your shoes or change the brake pads on your car.

1. FOOD
Don’t worry about theme food. That bowl of Game of Thrones-inspired Red Wedding tomato soup and Downton Abbey pudding are gonna look appetizing for maybe 20 minutes before they start congealing into disgusting messes. But the freshly fried tortilla chips salted with the tears of middle-aged bachelors are delicious—especially dipped into the Guacamole of Sadness.

2. ALCOHOL
It helps all that faux camaraderie and “It’s an honor just to be nominated” patter go down easier. Plus, you’ll need it for our red carpet drinking game. Remember, fashion is a sport and when Joan Rivers is judging, no one ever wins.

3. THE RIGHT PEOPLE
Guests who are fun and actually watch television are key. An Emmy party is the ultimate spoiler zone, so if you’re still on season 2 of Breaking Bad, either plug your ears and hum a Miley Cyrus tune when people start chatting about the show or accept the fact that you’re going to find out that Walt kills Mike. We would say, “sorry”—but we’re not. Whatever you do, DO NOT invite that one friend-of-a-friend who has barely seen any TV shows, loudly asks stupid questions about every nominee, gets hyper-competitive about winning the $2 ballot, and shushes people who make wisecracks at the screen.

*Seriously, we called tons of L.A. joints, especially ones known for throwing Oscar parties, and were told by almost every establishment they had no plans to host an official viewing party but might flip to the Emmys when they came on.