Home Awards Watch Inside the Best (and the Rest) of This Year’s Many, Many Emmy... 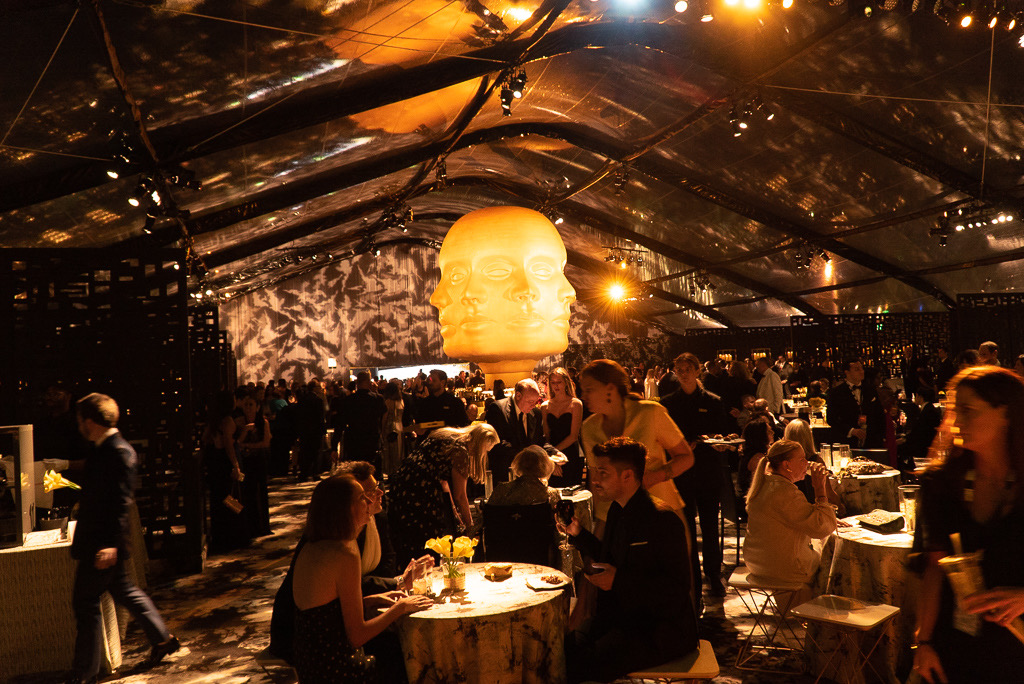 This year’s wide swath of pre- and post-Emmys parties reflected the moment in television in general: There was something for everyone—but not one central, must-see, must-be-at blowout. There were a few too many hoedowns to get a handle on, but lots of fun little moments everywhere.

“Emmy weekend,” as it’s now being referred to, got kicked off Thursday night at Audi’s annual pre-Emmys fête at Sunset Tower. Outside, autograph hounds and selfie stalkers gathered to gape at all the beautiful people—whether or not they were big names. Even not-famous good looking people have to have a party to go to and dress up for, right? Laura Dern was glammed out in a poufy black tulle net dress and a side ponytail. She was accompanied by Big Little Lies producer Jean-Marc Vallée, but the most gawked-at guest? Milo Ventimiglia. By a mile.

Best Thing About It: Catering by Sugarfish

Friday night the Sunset Tower Hotel was the scene of another blowout: Entertainment Weekly’s pre-Emmys affair, presented by L’Oreal Paris – so you know the gift bags were, at the very least, pretty. Lots of the hot shows of the moment were represented: The Marvelous Mrs. Maisel (Caroline Aaron, Kevin Pollack), Orange Is the New Black (the ubiquitous Laverne Cox), Chernobyl (Jared Harris), This Is Us (Sterling K Brown), When They See Us (Niecy Nash), Pose (the Marvelous Mr. Billy Porter in oversized aviators, a see-through mesh top, silvery jacket, and tulle mini dress and high boots).

Best Thing About It: Billy Porter, who was pretty much the best thing about the Emmys altogether.

It was Brits galore at Sunday’s veddy veddy British afternoon affair at the Beverly Hilton: Jared Harris (Chernobyl), Jodie Comer (Killing Eve), and much of the cast of best drama Game of Thrones: John Bradley, Liam Cunningham, Nathalie Emmanuel, and Carice van Houten, plus Ava DuVernay and Sandra Oh, who seemed to be two of the most desired guests of the whole week, since they both attended just about everything.

Best Thing About It: Jared Harris (cheated out of an Emmy) and cucumber sandwiches

Samantha Bee was the guest of honor at the late afternoon/early Saturday evening Canadian Nominees party at the Official Residence of Canada in Hancock Park, hosted by Canadian Consul General Zaib Shaikh.

Best (and Worst) Thing About It: Justin Trudeau wasn’t there.

Best Thing About It: Virtually no press present, so the stars could get smashed, tell dirty jokes, and suck up to bigger stars with no journos overhearing the action.

Sunday night, the Governors of the Television Academy throw a formal after-show dinner and ball for winners and nominees every year—just like the Motion Picture Academy does. This year’s theme was “Brilliance in Motion,” was took its décor of kinesis seriously: picture dancing waters and fountains at the deck of L.A. Live, where the awards show was held. Zendaya’s second dress of the night – she was one of the few who changed it up – was the total opposite of her slinky green Vera Wang: a white strapless mini pouf dress with pink poppies and a long train. Phoebe Waller-Bridge, with her beau of two years Martin McDonagh (who wrote and directed Three Billboards Outside Ebbing, Missouri, as well as In Bruges), marched in with her three Emmy’s and snagged the spotlight. Fleabag’s “Hot Priest,” Andrew Scott, was also there, sitting with Black Mirror’s Charlie Booker (Scott appeared in a Black Mirror episode this year, too). Lots of Brit winning presence: Jodie Comer showed off her Emmy in her white Tom Ford cape gown. Big winners Patricia Arquette, Jason Bateman, and Billy Porter were on top of the world, as was Game of Thrones author George R.R. Martin.

Best Thing About It: Hair down and no press (said this reporter).

Held in a giant tent at the Pacific Design Center, what’s traditionally the hottest after party and the one where all the reporters have always convened had only four we could spot. The attendance seemed cut in half, perhaps as a result of it being a Warner/Turner party. Cold dishes were served in lieu of hot, giant buffets, and the décor—all brown and gold—was dominated by a huge, multi-faced head at the center of the room. A nod to the many-faced God, perhaps? Well, he wasn’t there, but Kit Harington was, dapper in Givenchy and without wife Rose Leslie. Four-time winner Peter Dinklage eschewed his tux for a black T-shirt and black jeans. Westworld star Jimmi Simpson showed up in khakis, a white shirt with a box tie, and linen desert boots; what he lacked in attire he made up for on the dance floor. Sophie Turner came without Joe Jonas, who’s on tour, and Emilia Clarke was also solo.

Kate McKinnon, looking non-plussed after striking out, toured the crowded space with SNL co-star Aidy Bryant. Maisie Williams entered via a side entrance with her parents. Once Upon a Time in Hollywood star Margaret Qualley, in black Chanel, came with another dude and not rumored new  boyfriend, the ubiquitous Pete Davidson. And SNL producer Lindsay Shookus, who famously dated Ben Affleck, brought her Emmy, but not rumored new boyfriend Jon Hamm, who attended other parties.

Best Thing About It: Seeing Ben Stiller on what appeared to be a date with ex-wife Christine Taylor.

Over at the Chateau Marmont, Amazon toasted its many winners, including Tony Shalhoub, Alex Borstein, and, of course, Phoebe Waller-Bridge, who showed up later in the evening and got a round of applause upon entering. Later, the the hotel’s outdoor patio would become the setting for the already iconic photo of Waller-Bridge surrounded by statuettes and smoking a cigarette.

you: glamour is over
me: think again pic.twitter.com/JUQu1aM15Y

The Best Thing About It: The woman who wowed the crowd when she came out and began accompanying the DJ on an electric violin.

RELATED: Understated vs. Over-the-Top: The Best and Worst Emmys Fashion