Home Celebrity Scream Queen Emma Roberts Is Afraid of Everything 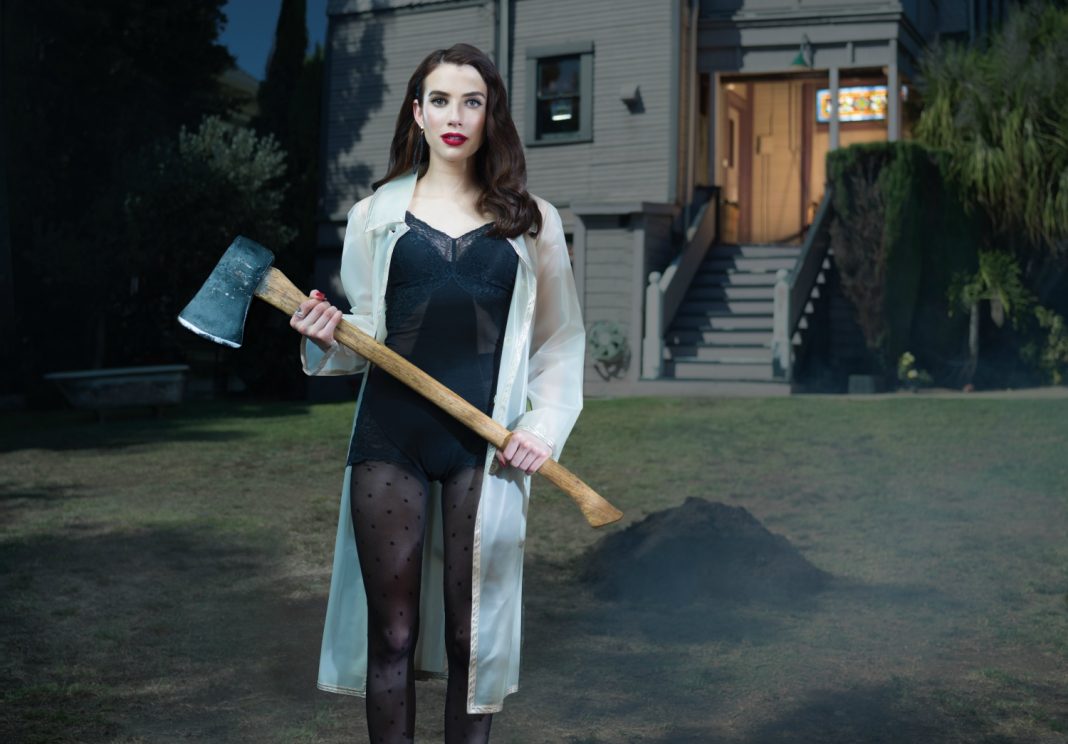 Emma Roberts has a theory about why, in the great damsel-in-distress tradition of Janet Leigh, Tippi Hedren, Jamie Lee Curtis, and Drew Barrymore, she, of all the young actresses, has held the title of Hollywood’s reigning scream queen much longer than most (six years): “Because I’m scared of everything!” The diminutive brunette giggles anxiously. But what, realistically, does a young (28), successful actress (nearly 20 years in the business) have to be afraid of? Putting on five pounds? “Everything!” she insists. “Really! I’ve always been the person screaming. I’m always freaked out: ‘Someone’s under the bed!’ ‘What is that noise outside?’ I’ve always had anxiety. Always.”

This perpetual fear factor has had an upside, considering Roberts kicked off her horror film career with Wes Craven’s Scream 4 (2011), then morphed into one of Ryan Murphy’s main horror honeys on American Horror Story: Coven (2013), which was followed by, of course, Scream Queens (2015) for two seasons, and then regular roles on AHS. Roberts says of the show’s latest iteration, American Horror Story: 1984, in which she stars: “There are so many stunts, knives, fights, and people falling into a lake. I got dragged through gravel the other night. I woke up the next day with bruises all over my legs. But it’s fun. What do I love about horror? Adrenaline. I had to roll down a hill the other night into a puddle. I was wondering why I hurt the next day, and everyone on set said, ‘Because you rolled down the damn hill!’ ”

Despite her inherent jitters, Roberts became a child star at the age of nine and, at 15, was cast on Nickelodeon’s Unfabulous, carrying the whole show with what appeared to be great ease. The daughter of actor Eric Roberts, niece of Julia Roberts (who took her to sets as a kid), and granddaughter of Georgia-based acting teacher Betty Lou Bredemus Roberts, Emma grew up with her mother, Kelly Cunningham, after her parents separated when she was a baby. She was homeschooled from 12 to 18.

“I spent a lot of time lonely—on sets, traveling,” Roberts admits. “Maybe that accounts for the fear. So now I’m adult, and all my worst fears basically play out at work every day.” Then she laughs. “I always wish someone could see behind the scenes: We’re running through a forest at night, the rain’s pelting, someone has a knife at our throats. Then they say, ‘Cut!’ and we’re all, like, ‘What do you want to eat for lunch? So what are you guys doing this weekend?’ ” Today, between shots at a spooky Echo Park Victorian where Roberts is playing an ax murderess digging a backyard grave, she munches on pizza and calls friends to come hang out.

Interestingly, Roberts is the rare horror star who has played both the killer’s victim and the vixen killer. To kill or be killed, that is the question. “I think both are really fun,” she says. “I had somebody come up to me recently and say, ‘How can you be so scary? You’re so little!’ ” (She’s five two.) “This year I’m playing more of the victim. I’ve lost my voice several times from screaming. But playing the villain in Ryan Murphy World is great because the dialogue’s smart and juicy—funny as well as scary. The most fun is horror-slash-comedy because you go from scared to laughing, which is in itself kind of eerie.”

“This year I’m playing more of the victim. I’ve lost my voice several times from screaming. But playing the villain in Ryan Murphy World is great.”

How has she mastered screaming in so many octaves while performing so many facial contortions? “I watch scary movies at home,” she explains. “I just rewatched Nicole Kidman in The Others, seeking inspiration for how to look terrified and cry in every scene. I watched [Netflix’s] The Haunting of Hill House, too, but then thought I saw the Bent-Neck Lady all over my house—I couldn’t sleep for a week.”

Constantly pretending to be petrified is a skill—one she really can’t explain except to say that it sort of comes naturally. “As an actor you can’t see yourself, so you kind of hope for the best,” she says, giggling. “That’s when I have to think about scary things.”

Lots of everyday things—or, rather, nightly ones—scare the crap out of her, too: “Driving at night in the canyons is so eerie—Laurel Canyon and Nichols Canyon. Driving home at night up there when it’s totally quiet, no traffic, fog rolling in? Totally creepy. Especially for a young girl living alone. I’ve found myself on the way home calling my mom or my girlfriends, going, ‘We need a sleepover tonight!’ ”

Instagram also gives her the willies, despite having 13 million followers—or maybe because of them. “It used to be putting up with people in school being rude to you. Now school’s the whole world. But I can’t get sucked into the negativity—it’s toxic for your brain.” It was particularly so when she and her frequent AHS costar—her then very on-again-off-again boyfriend-fiancé, Evan Peters—had a physical altercation in Montreal that left him with a bloody nose and her taken into custody. Overnight they became the new Liz and Dick.

“Relationships are hard enough between two people, let alone two people and the entire internet,” she says. “People say, ‘Why’s it so hard for celebrities to have relationships?’ My answer? ‘Do people photoshop their face over yours with your boyfriend?’ It’s just a weird thing. Hey, I get it: When I was growing up, I was obsessed with celebrity couples. It’s just not as fun when it’s you.” (Roberts and Peters finally called it quits last spring, but she now has a new celebrity paramour to visit her on set: Garrett Hedlund.)

So not everything in Roberts’s life is a nightmare. She watches rom-coms compulsively (particularly Aunt Julia’s) and just starred in one for Netflix called Holidate, produced by McG and coming out next year. She enjoys reading so much that she started a popular book club on Instagram called Belletrist. “Reading got me through sitting around sets. When starting new roles, I’ll pick out books for the character. I was reading Chelsea Handler’s My Horizontal Life, but then I had to get murdered in a scene, so I switched to Stephen King. Of course that gave me even more anxiety.”

Fashion’s also a passion. “Louis Vuitton, Attico, and, right now, black witchy boots and patterned stockings,” she says, getting excited. (She’s wearing black witchy Louboutin boots.) “Even as a kid I loved dressing up. I always wanted to be in costume. Halloween’s my favorite day of the year. I’m serious! One year I dressed as Carrie at the prom but with vampire teeth. Any excuse to eat a pound of Reese’s. I have several in my bag right now, for an emergency.”

Will the ‘Scream’ Reboot Live Up to the Franchise’s Legacy?