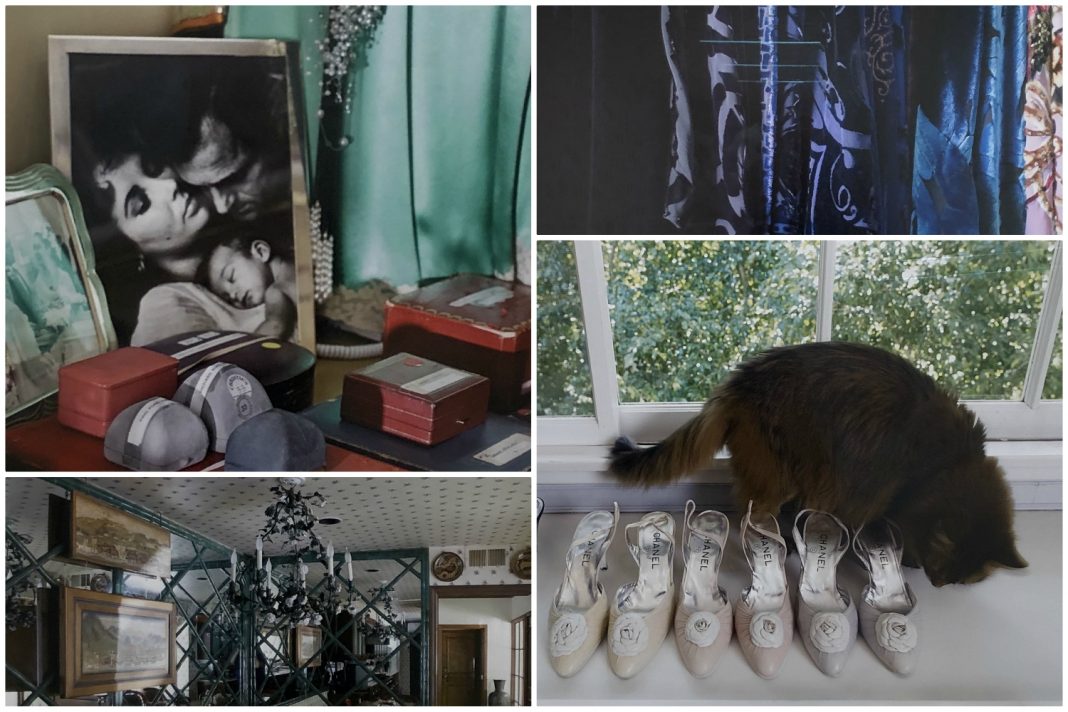 For three decades, the sprawling ranch-style mansion at 700 Nimes Road in Bel-Air was the home of Dame Elizabeth Taylor, the legendary movie star, perfume maker, lover, and activist. It’s a home that Tim Mendelson, Taylor’s long-time personal assistant and friend, knew well. “Elizabeth liked homes that made people feel comfortable,” Tim explains. “It was pretty big, but it was warm, and it wasn’t grand.”

Taylor may have owned some of the most famous diamonds in the world, but she also adored wall-to-wall carpet, NCIS, and fried chicken. Above all, Elizabeth loved people. “She was a people person,” Mendelson says. “I mean, she loved animals too. But she was all about people.”

Taylor may have owned some of the most famous diamonds in the world, but she also adored wall-to-wall carpet, NCIS, and fried chicken.

In the fall of 2010, Mendelson was informed that renowned photographer Catherine Opie was interested in photographing 700 Nimes Road. “She wanted to document Elizabeth Taylor through her home and her belongings, creating a portrait. So, we talked. She seemed incredibly lovely and articulate and interesting,” Tim says. “I was like, ‘OK, so she’s not going to come in and it’s not going to be Architectural Digest. She’s gonna have a different kind of take. She’s not a girly girl, and Elizabeth is a girly girl.’ I thought it could be interesting.”

“So, I went to Elizabeth and I was going on and on and she’s like, ‘I get it and it’s fine! Just go ahead and do it.”

An ailing Elizabeth, who passed away on March 23, 2011, would never meet Opie, who photographed the house over the last six months of Taylor’s life. Portraits from the remarkable photo series, titled 700 Nimes Road, are on display at the Marciano Art Foundation on Wilshire Boulevard as part of the permanent collection.

“She offered me the job as her secretary,” Mendelson remembers. “And I was like ‘Uh no.’ And she said, ‘What do you mean, no?’ I didn’t understand what a secretary meant to her. I mean, I didn’t type or take dictation. I’m like, ‘I don’t have the skill sets for being a secretary!’” She said, ‘That’s not this. I mean yeah, it would be helpful if you did those things, but that’s not what a secretary is!’

“I’m not trying to say that she was a country, but she was a big deal!”

“Remember, she was married to John Warner [husband number six], who was Secretary of the Navy. I’m not trying to say that she was a country, but she was a big deal! Secretary to Elizabeth did not mean sitting and taking dictation all day long and typing letters. It was really being the keeper of secrets…Finally she just said, ‘Oh shut up, you’re taking the job!’”

“This is the trophy room,” Mendelson says of an image of a wood cabinet behind a sofa. “In some sense she understood her house was public. There were meetings, there were interviews, there were photo shoots. And so she recognized—and she was smart enough and real enough to say, ‘Look, these are the things people want to see.’ She still knew she was Elizabeth Taylor to other people. I mean she was Elizabeth to herself. But she knew about that person—Elizabeth Taylor.”

In the trophy room were Elizabeth’s numerous awards; one of her few directions for the Catherine Opie project was that Mendelson retrieve the Jean Hersholt Humanitarian Award (she had given it away) to place in the trophy room. There were also photos of Elizabeth with her famous friends and dignitaries, including a whole shelf dedicated to her meetings with Queen Elizabeth and Princess Margaret.

“She danced in front of the two princesses as a little girl,” Tim says. “Then they [the Taylor family] moved to Los Angeles and Sarah—she was the ultimate stage mother. My guess is that Sarah was grooming Elizabeth to be a princess when they were in England. But when they came to Los Angeles, she groomed her to be a movie star. And Elizabeth was born to be a movie star.”

Elizabeth loved greenery and gardens. Her estate in Bel Air featured English-style grounds planted with gardenias, Elizabeth Taylor roses [pictured above], and her favorite flower, Lily of the Valley. Although she was the owner of a spectacular panorama of Los Angeles, she preferred not to see it. “She did not want to have a view,” Mendelson recalls. “She wanted to be more encased because she was so photographed. One time the gardeners cut down a bunch of trees to make a view, and she got really upset. She said, ‘These are here because I want them here!’ So, we put in this fast-growing bamboo and gave it all these vitamins and minerals and whatever and made them grow as quickly as possible. And she’d always say, ‘When are they going to grow?’”

“She was super close with her family and she loved them more than anything,” Mendelson says. Most weekends, Elizabeth had a “Sunday gathering” at her house, when her close friends like Roddy McDowell, her four children, and ten grandchildren feasted on some of her favorite foods. “One of her great-granddaughters called her fancy grandma,” Tim laughs. “Not to her face though. She knew she had two grandmas and so she would say, ‘Oh, are we going to fancy grandmas?’”

She also held on to mementos of loves and family members past—but she lived decidedly in the present. “That’s her wedding dress to Richard Burton,” Tim says of the photo above. “She sold her house in Gstaad [Switzerland] and we went with the Christie’s people and took her kids and it was a massive day. The house was jam-packed with stuff… and we brought this back. I guess I thought, it was a wedding dress- it should go to the cleaners and be in a wedding box! But Elizabeth said, ‘Why is this in a wedding box?’ She felt this was silly. She’s like, ‘Just put it on a hanger in the closet or put it in storage, but it doesn’t need to be in a wedding box! She was very practical.”

“She was the most loyal friend you could ever have,” Mendelson says. “I mean, when you were in trouble you could not have a better friend than Elizabeth. She was also intuitive— sensitive, intuitive, psychic whatever. And she would know when you needed her help and know exactly what to do. And because she was Elizabeth Taylor, she could move mountains. She taught me to value myself. That every person is important…When I went to work for her, I was still kind of closeted. It’s the first time in my life that I felt comfortable being openly gay, because in her world there was no reason not to be comfortable with that. She made it completely acceptable.”

“When she went shopping, she’d end up buying the whole store,” Mendelson says with a laugh. “So it couldn’t be every day.” This is a collection of Elizabeth’s favorite boots, from Boot Star on Sunset Boulevard.

“She always wore jewelry,” Tim says. “She wore that Krupp diamond [the legendary 33.19-carat diamond given to Elizabeth by Richard Burton] even to sleep—I mean she wore it ’round the clock. She loved emeralds and sapphires and rubies. I would say she was an equal opportunity collector. She wasn’t kicking anyone out.

“She knew that these pieces were not going to just get thrown in the trash. They were going to go on and have their own life probably for hundreds and thousands of years, so she realized that she was just a temporary custodian. She appreciated them, she wore them, she had fun with them. And she just hoped that whoever got them next would do the same. It’s only good if you’re enjoying it, it’s meant to be worn!

“This is some of the most valuable jewelry. I had this fantasy, this vision of Elizabeth being like a pirate with all her booty. And so I said, ‘Cathy, can we just do one thing? Like maybe no one can ever see?’ And she’s like, ‘sure!’ So, we just took this Louis Vuitton suitcase and put some tissue and then a blouse over it and then just laid out all the jewelry really, really carefully. I meant it was fine, nothing was damaged, but it’s kind of sacrilegious. I don’t know why—I just really wanted to do it.”

“Elizabeth only wore her own perfume. 100 percent,” Mendelson says. “Sometimes people would give her another perfume and she didn’t understand it. She’s like, ‘Why would somebody give me perfume? I have my own perfume!’”

Elizabeth was intimately involved with the creation of her iconic perfumes including White Diamonds, Passions, Black Pearls, and Violet Eyes. During the development of Gardenia Elizabeth Taylor, she proved herself to be a very exacting creator.

“They brought a combined gardenia fragrance to the house and it just didn’t smell gardenia-y enough,” Mendelson remembers. “And in the front of the house, she had all these white gardenias and she sent me out there and said, ‘Get one of the gardenias. And show them what a gardenia smells like. This perfume doesn’t smell like the gardenia!’ So, we did that. Another meeting. Another, “No!” Another gardenia. And then finally the fragrance company had the perfumer come out with some kind of machine that could capture the exact scent of the gardenias in her garden. And then they finally got it to a point where she signed off on it.”

In the last years of her life, Taylor and Mendelson occasionally went for appetizers and drinks at the iconic gay bar the Abbey in West Hollywood. “They make it sound like she went there every day,” Mendelson says with a laugh. “We probably went there eight times, max.”

But when they were there, thrilled patrons would thank Elizabeth, one of the co-founders of amfAR, for her tireless AIDS activism. “Men at the bar came over and told her with tears in their eyes, and said ‘You saved my life,’” Mendelson recalls. “When she stepped into the fight against AIDS at the time that she did [the mid-1980s], she moved the whole thing forward because at the time no one was doing anything, no one was listening. And this was Elizabeth Taylor, who had this huge spotlight on her from the time she was 12-years-old. So, she used that to draw attention to the crisis. It’s very hard to get. The impact of it all. But when Elizabeth walked into a room—the way she talked, the compassion that she had, and the loud voice she used to say what was needed—she wasn’t afraid to say anything.”

Elizabeth’s activism lives on through the Elizabeth Taylor AIDS Foundation. Mendelson is one of the trustees.

‘It’s What Keeps Me in Business’: WeHo Gay Bars Brace for a Year without Pride Crowds