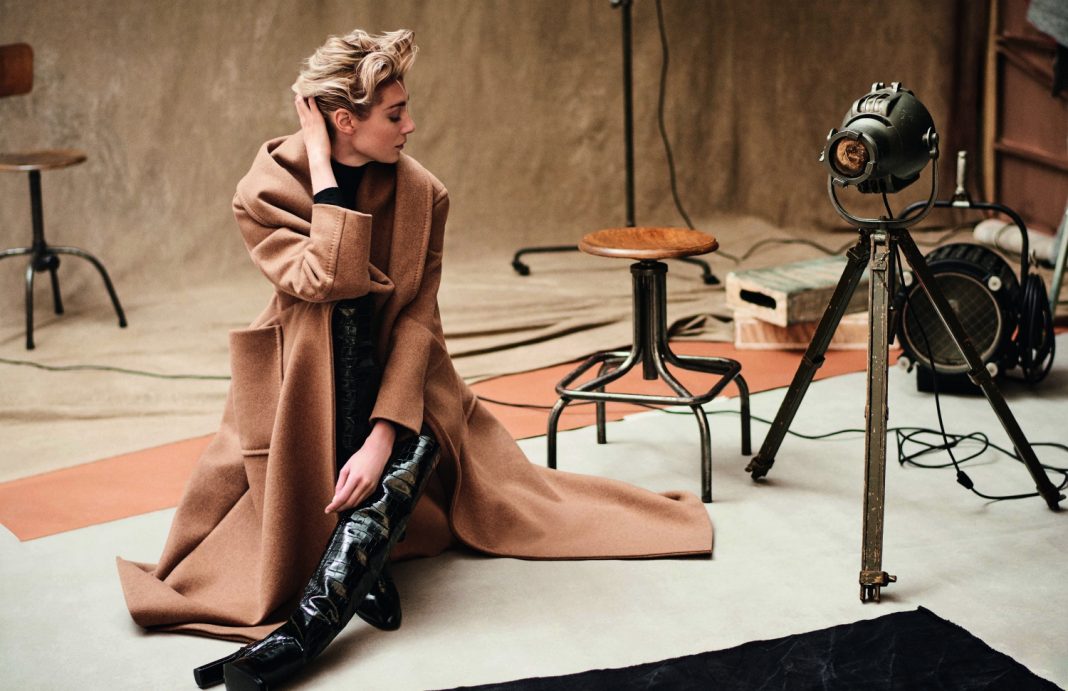 The woman with a pronounced Aussie accent on the other end of the phone line is audibly unrecognizable as Elizabeth Debicki. Turns out the tall, blond, Keene-eyed star of Widows, The Night Manager, Baz Luhrmann’s The Great Gatsby, and the Jean Genet play The Maids (alongside Cate Blanchett and Isabelle Huppert) has played American much more often than Australian.

“It’s funny,” she says about people not recognizing her voice. “This accent is real! I’ve so rarely played an Australian. We shot Gatsby in Sydney, and I played American. In Breath, this deeply Australian story, there’s one American character in it—and I played her! I got to know Hugh Laurie quite well on The Night Manager, and people so loved him from House, they were shocked he’s English. It’s an interesting mash-up when someone plays a character not from their own culture. If you can work through dialect, the world’s your place—it’s anyone’s game, really, isn’t it? Accent is fascinating to me because it feels like an entry point—it gives you access to a character’s psychology.”

At just 28, the former ballet dancer has played a dizzying range of types: modernist-era author Virginia Woolf in Vita and Virginia, Scottish noblewoman Lady Macduff in Macbeth, gold-toned high priestess Ayesha in Guardians of the Galaxy 2, and a Chicago sex worker turned thief in Widows.

“I don’t know what people are thinking when they cast me,” she says with a laugh. “When I think about my patchwork career, it intrigues me just as much as it does others. I could never have seen any of it coming. I keep myself very open to what I’m going to do next. When you don’t shut down to any idea of what you could be—you can have a stab at Virginia Woolf. I feel there’s a symbiosis in what I’ve experienced in life and certain roles, and it can well up in the casting room. It’s an organic leap—unconscious to both the actor and the casting agent. There’s a sort of ownership of the same emotional experience.”

Since playing Alice in Widows—she virtually stole the film—she’s landed more and more amazing projects: the new HBO series Lovecraft Country; a film adaptation of The Burnt Orange Heresy, in which she’ll appear alongside Mick Jagger; and the new Christopher Nolan film, Tenet, an international spy thriller starring Robert Pattinson and Michael Caine, about which she’s been forbidden divulging one iota of plot.

“I do feel like Widows changed my trajectory,” Debicki admits. “Alice is a remarkable character; to be given that role as an actress was just a pure gift that I could sink my teeth into. To watch someone with lack of self-worth is painful: her role in society is to be objectified, to not search for independence. Then you watch her crash through those feelings and realize, ‘This thing I’ve done to survive, this captivity, my supposed weakness, is actually my gift.’ That’s a nutshell version of what we all hope to experience in life.”

Her sultry Jed in The Night Manager is another woman in sexual captivity, a moll to Laurie’s arms merchant. “She evolves herself, too, and breaks out of the mold. Her story to a degree is similar—it’s unfortunately very common. But it’s important as women that we get to see that journey. Forever we’ve been watching men conquer their demons and triumph in the end. We don’t get to see that about women because we’re often adjunct in the story, not the focus. Luckily, it is changing.”

This week is kind of like Debicki’s official L.A. coming-out party. On Wednesday night the actress will be honored with the annual Women in Film Max Mara Face of the Future Award at the Women in Film Gala, and on Tuesday, she was feted at a Max Mara celebratory cocktail party (with InStyle magazine) at Chateau Marmont.

“Elizabeth, personally and professionally, represents all that Women in Film stands for,” says Amy Baer, board president of Women in Film L.A. “She’s created her own opportunities without trepidation or timidity, building her career as she sees fit, rather than how the industry would traditionally have a rising actress do. The caliber of filmmakers she’s already worked with speaks to how powerful that is.”

And she’s managed to be authentically herself—Aussie accent or otherwise.

From Phone Sex to Factory Labor, a Look at How Women Work on Film