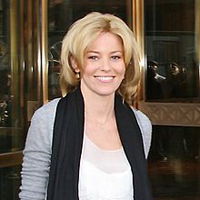 The star joined Slate critics Dana Stevens, Julia Turner, and Stephen Metcalf for a wide-ranging discussion, which included her role in the new film. Banks plays villain Effie Trinket, a character she said reminds her of a modern day Marie Antoinette. In trying to find empathy for Effie, Banks grew to love her complexities despite her role as a representative of a totalitarian regime that mandates a pair of children fight to the death each year. For Banks, the essence of The Hunger Games lies in protagonist Katniss Everdeen’s transformation from an innocent young girl into a revolutionary. She especially enjoys the how Katniss and Effie work as foils. Their opposing personalities creates a dynamic conflict and bring balance to the film, she said. So, is she on Team Peeta or Team Gale? Team Peeta, all the way. His love for Katniss stole Bank’s heart.

The trio of critics also touched on the controversy surrounding This American Life’s recent retraction of the Mike Daisey monologue The Agony and the Ecstasy of Steve Jobs after it came to light that parts of Daisey’s radio adaptation, designed to bring awareness to product manufacturing in China, were fabricated. Turner was especially bothered that Daisey fudged the truth about the very Chinese workers he professed to care so much about. However, she deemed the fact-checked, hour-long retraction almost as riveting as the initial piece, due to extensive reporting conducted to expose the falsehoods in the original broadcast. The retraction made for good radio, Stevens said, calling it “excellent cringe theater.”

The group then moved on to examine the quirkiness of Zooey Deschanel, the star of the Fox sitcom New Girl. Deschanel has become a modern feminist flash point on the Internet, Turner said, emphasizing the ways in which Deschanel embodies the classic “Manic Pixie Dream Girl” with her girly love for cupcakes, ruffles, and vintage dresses. Turner isn’t bothered by the portrayal because there are plenty of other shows that star different types of women. She also praises the show’s subtextual writing, as did Metcalf, who pointed out that the young female writer of the show did a great job creating its male characters and nailed the guys banter.

The discussion was followed by a cocktail hour on the museum’s rooftop, where guests had the opportunity to talk with the critics.