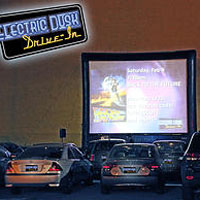 In the era of souped-up home entertainment systems and multi-screen megaplexes it’s nice to know you can still find a drive-in theater in the heart of downtown Los Angeles – at least until April 6. That’s the last night Electric Dusk Drive-In will be able to screen movies at its current location.

Since October of 2012, Electric Dusk Drive-In has been projecting films on the roof of a building located at 240 W. 4th Street (between Broadway and Spring St.). Tickets to most screenings were $10 and the process worked the way a traditional drive-in did – except that you were parking on the roof of a not-so-high high-rise in downtown’s historic core instead of an asphalt lot anywhere in suburban America.

In an email sent yesterday, Electric Dusk wrote: “Standard Parking has lost their lease from the building owner because the lot was purchased by a developer. Our current location will soon be the tallest luxury high-rise in Los Angeles!!”

Though they must vacate the space by April 14, Electric Dusk has already programmed a fun and eclectic slate of movies for May that includes Goodfellas, Alien, and All About Eve. The question is: Where will they screen? While event organizers look for a new location (hopefully in DTLA), you can catch Electric Dusk Drive-In in its current space one last time. On Saturday, April 6 their “farewell” screening will be the whimsical family flick Willy Wonka and the Chocolate Factory. Stuff yourself with Everlasting Gobstoppers but take it easy on the Fizzy Lifting Drinks.

Updated! All of L.A.’s Pop-Up Drive-In and Outdoor Movie Nights