Home Celebrity EGOT Mania: How to Win an Emmy, a Grammy, an Oscar, and... 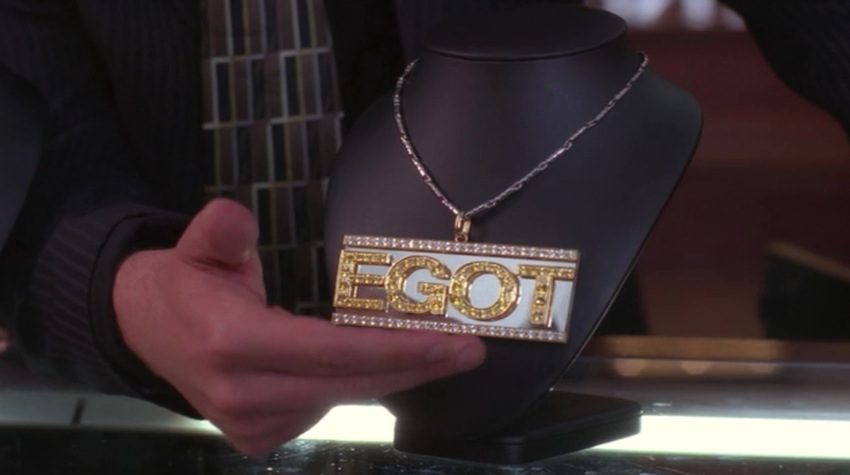 In 1985, high on the fame that came from playing Miami Vice’s second banana, Philip Michael Thomas made a declaration that would come to haunt him but launched a showbiz meme. In a “20 Questions” column in Playboy with his Miami Vice co-star Don Johnson in November of that year, the 36-year-old Thomas who portrayed Ricardo Tubbs said: “I told Don about my goal, EGOT, which stands for Emmy, Grammy, Oscar, Tony–I want to win or be nominated for each award in the next five years.” In pictures from the mid-‘80s, Thomas sports a gold necklace bearing the letters EGOT. (The actor claimed they stood for “Energy, Growth, Opportunity, Talent.”) Not only did Thomas not collect these awards, he was never nominated for any of them. That’s where EGOT mania would have died, much like Thomas’s career, if it weren’t for 30 Rock. In season 4 of the NBC show, Tracy Jordan (played by Tracy Morgan) declares that he wants to become an EGOT (and sports his own EGOT necklace), a goal he achieves by season 5 (click here to read one theory about how he did it).

In the real world, there are only 12 people who have accomplished this feat (not counting honorary awards) including Helen Hayes, Rita Moreno, John Gielgud, Whoopi Goldberg, Mel Brooks, and, most recently, composer Robert Lopez. When Tom Hanks headed to Broadway to star in Lucky Guy, talk of his acquiring the final letter of the EGOT followed. With his win at the Creative Arts Emmys for the Between The Ferns video on which he guests, President Obama, having already won two spoken word Grammys for his audiobooks, is halfway to an EGOT, which means he’s closer than any other Commander in Chief. A win at next Monday’s Emmys for Kevin Spacey or Matthew McConaughey would move each actor one letter closer. But there are several potential EGOTs who are only one or two awards shy of hitting the jackpot.

Justin Timberlake
The Grammy- and Emmy-winning crooner should hitch his star to a Broadway show (for the Tony) then take the same role to the screen (for the Oscar) in order to bring sexy back to the EGOTs.

Hugh Jackman
Having earned an Emmy for hosting the Tonys, the Aussie actor should attempt to win the first Grammy for singing music from the Oscars or an Oscar for playing a Grammy-winning singer.

Matt Stone and Trey Parker
The South Park and The Book of Mormon creators only need an Oscar. If anyone could win a best picture statuette for a comedy, it’s this duo.

Kate Winslet
Among those who have all but the Tony are Kate Winslet, Julie Andrews, and the late Robin Williams. We predict an award-winning musical for Winslet.

Cyndi Lauper
Although Cher needs only a Tony, we’re keeping our eye on an even more unusual singer. Lauper, who won an Emmy for her role on Mad About You and a Tony and a Grammy for her musical Kinky Boots, seems like she could nab a stealthy best supporting actress Oscar for the right role.

Cynthia Nixon
Wouldn’t it be interesting if the versatile Nixon (who has an Emmy for Sex and the City, a Tony for Rabbit-Proof Fence, and a Grammy for reading An Inconvenient Truth) were in contention for that very same Oscar with Lauper?

Aaron Sorkin and Stephen Gaghan
Writers Sorkin and Gaghan, who both have Oscars and Emmys, ought to consider penning something about their favorite musicians so they can pick up Grammys for best album notes.

David Hyde Pierce and Neil Patrick Harris
Pierce and Harris both have Emmys and Tonys and they both possess the kind of range that creates EGOT buzz. Perhaps like EGOT Mike Nichols and his comedic partner Elaine May, they could combine forces to secure a comedy or spoken word Grammy.

Al Pacino, Geoffrey Rush, Jeremy Irons, and Maggie Smith
Since all four of these actors only require a Grammy to become an EGOT, we suggest they form a supergroup to contend for the best alternative music category, with the Dowager Countess on drums.

Martin Scorsese
With a Grammy for a video for No Direction Home, an Emmy for Boardwalk Empire, and a long-awaited Oscar for The Departed, all the filmmaker needs to earn a Tony is to stage Goodfellas: The Musical! Jazz hands, everyone.