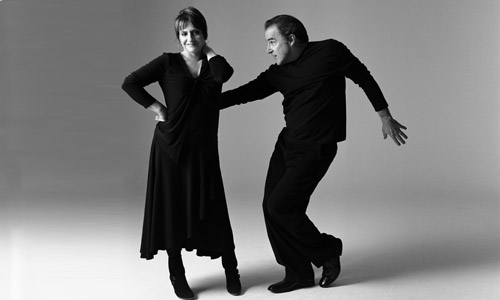 So Macho Show Queen and I have (not surprisingly) been traveling in similar circles this week. I attended An Evening with Patti LuPone and Mandy Patinkin, which just wrapped a successful engagement at the Ahmanson; this past Sunday I upped the diva ante when I saw Jennifer Holliday front the Gay Men’s Chorus in Glendale (not since Rufus Wainwright recreated Judy at the Hollywood Bowl have I witnessed a finer-looking gathering of the XY chromosome). MSQ and I did not see both shows together, nor do we always agree. That said, I’m going to allow him to do the talking with the occasional comment. Without further ado, the Macho Show Queen report:

While the world was trapped in an ’80s flashback due to—well, hell, I don’t have to remind you why—I had my own time warp revisiting the stars of two major Broadway musicals from that decade.

On Sunday I saw the Gay Men’s Chorus at the under-utilized Alex Theatre in Glendale.  Their “Broadway” program featured guest performances from the original Effie in Dreamgirls, Ms. Jennifer Holliday.

When I was a wee-little macho show kid, I had the privilege of seeing Ms. Holliday in that show three times at the now-defunct Shubert Theater. You can imagine how excited I was to see for the first time in years one of my first true stage divas.

After several songs by the GMCLA, including a couple from Spring Awakening, Ms. Holliday took to the stage to great applause and cheers. She announced that she wasn’t going to sing “Blues in the Night” with the band or chorus. That turned out to be an apropos choice, as I felt the blues start hitting me square in the solar plexus. Such a talented ensemble and an equally talented band, but she used backing tracks? By the way, I don’t know if she knows this, but “Blues in the Night” is from a movie, not from Broadway.

At the end of Act 1, Ms. Holliday came back out and sang “One Night Only”—once again with backing tracks, and now accompanied by back-up dancers [MM notes: In sequins, no less!]. If any of you have seen the show or even the movie, you know that Effie only sings the ballad version. That’s how it should be, but it wasn’t this afternoon. What I saw on that stage made my jaw drop. The upside? I’ve cleared up a couple quick myths: number one is that not all gay men can dance; number two, that gay men don’t always have great fashion sense.

In the second half of the show, Ms. Holliday sang the “3-act play in one song” classic from Dreamgirls that is “And I Am Telling You.” Well let me tell you…once again there were backing tracks and unfortunately it made the entire performance of this song seem like an obligation to be met rather than the passionate performance I remembered from my formative years. Of course, perhaps I’m in the minority as the audience went nuts. But as my mama done tol’ me, when I was in knee-pants, “Ford sold a lot of Pintos, that doesn’t make them good cars.” [MM would like to interject that she thinks MSQ harsh in his assessment of this song. And he hasn’t even mentioned how gorgeous Ms. Holliday looked!]

It wasn’t until the end that Ms. Holliday sang with the GMCLA and the band in the pit. With the performance of “We Are a Family” from Dreamgirls, it was at last a chance for me to see Jennifer Holliday as I remembered her: vital, passionate, committed. The chorus was clearly thrilled to have finally had that moment with her, too. It was a magical way to end the show.

After the performance there was a reception for Ms. Holliday, and you know I was not going to miss that! Nor was Carole Cook, who I think is secretly stalking me as we often end up in the same places. There to bathe in the light that is Jennifer Holliday were Bruce Vilanch, Dee Wallace (the mother from ET), Gloria Allred, and a subset of the GMCLA called “In Pink” that performed a wonderful a cappella version of “Tonight” from West Side Story for Ms. Holliday. Shortly after their performance, Ms. Holliday made her exit.

What amazes me about Broadway stars is not just their talent—in spite of my reservations, Ms. Holliday is still a major talent (check out her surprise duet in Atlanta with Jennifer Hudson)—but how easily they slip into day-to-day life once the curtain comes down. It struck me as ironic to leave the event and find her standing at the valet at Americana at Brand waiting for her car without a single person recognizing that this Tony Award and two-time Grammy Award-winning performer was in their midst. [MM recommends that video, too: One of the most insane performances you’ll ever watch—don’t miss the guy crying out, “Oh, my God” in awestruck disbelief in the background.]

So that was Sunday, on to Monday. I don’t waste time once I get back to town.

Thirty years ago, Los Angeles was given the opportunity to see Evita before it opened in New York. Even though I was an even littler macho show kid in 1979, I’ll never forget the moment Eva and Che waltzed into my memory. We haven’t had the chance to see LuPone and Patinkin together on our stages since then. Those who got tickets for An Evening with Patti LuPone and Mandy Patinkin were given a real treat.

The structure of the show is not radically different than the one Patinkin employed for his “Sings Sondheim” concerts: a relatively seamless progression of songs with few breaks. This concert reflected, for the most part, Patinkin’s passion for both Sondheim and Oscar Hammerstein. [MM adds: It also reflected his affection for LuPone.]

If you never thought you’d see Patti LuPone as “Nellie Forbush” in South Pacific or “Julie Jordan” in Carousel, this was your chance; if you’re not familiar with Sondheim’s songs from the little-seen Merrily We Roll Along you got that opportunity, too.

I recently saw two different productions of Forbidden Broadway, one in New York and one in Long Beach. Both LuPone and Patinkin are skewered for their oft-times idiosyncratic behavior. If you find their performance styles grating, I doubt you’ll have thought any differently here. However, the sheer joy on their faces as they performed, and the absolute passion with which they sang those songs—both together and alone—had MSQ on his feet along with Angie Dickinson, Jane Fonda, Mrs. Gene Kelly, and the rest of the crowd.

Of course, you know how I am. There’s always a wish list of things I didn’t get to see, like “Finishing the Hat” from Sunday in the Park with George, or the two of them doing either “A Little Priest” from Sweeney Todd or “Waltz for Eva and Che” from Evita. [MM here again: I would have been happy with “High Flying Adored,” and felt the “Don’t Cry For Me Argentina” ending to act one was gratuitous and didn’t fit the theme. But those two look pretty darn good, too—loved the tight-fitting V-neck on Mandy. I digress.]

Simply put this was the kind of evening that proves that Los Angeles can, and does, attract more than road shows with second-rate television stars. (Anyone recall Marlo Thomas in Six Degrees of Separation?)

After the concert my companion and I high-tailed it to Kendall’s Brasserie, or as I call it the Angus McIndoe of Los Angeles. This is the closest thing we have to a theater bar in L.A. and it lived up to its reputation Monday night. We were thoroughly entertained with stories from Patricia Ward Kelly about her famous late husband, and I had a brief encounter with Ms. Jane Fonda. Sporting a cane due to knee surgery, we spoke about her recent return to Broadway in 33 Variations, which I was lucky enough to see earlier this year. Though I didn’t bring up the other show opposite the theater that day—anti-Fonda protestors!

I don’t know if I had two or three glasses of wine after the show. I wish I hadn’t had that last glass (whatever number it was) because I overheard Ms. Kelly introduce herself to someone. I was either in a fog or otherwise distracted (there was some eye candy there, forgive me), but it turns out she was talking to none other than Ms. Patti LuPone herself.

How could I miss this? Where was I? Though I’ve met Patti on several other occasions it would be nice to have something new to say about my close encounters of the LuPone kind.

Oh, well, there will always be her performances at Disney Hall next year.