Home Uncategorized Eels Remains as Slippery as Ever 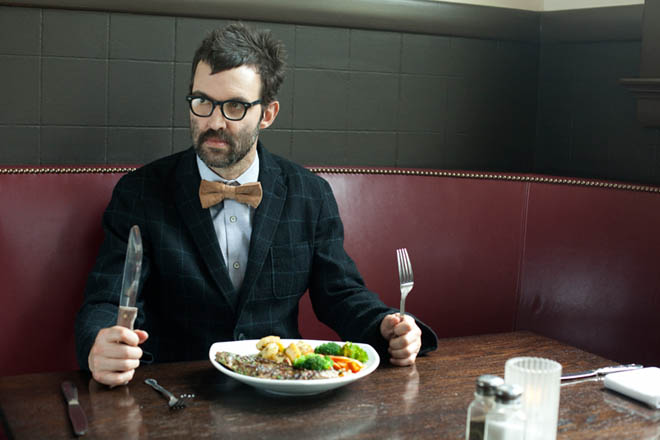 Share
Email
Facebook
Twitter
Pinterest
ReddIt
After disappearing from the spotlight entirely in 2012, indie rock’s eccentric uncle is back. Eels frontman Mark Oliver Everett — you might know him as E — is on the road to promote Wonderful, Glorious, the band’s tenth studio album. Past gigs have featured a ventriloquist as the opening act, bearded get-ups that could double as an homage to ZZ Top, and a spoken-word rendition of “Novocaine for the Soul” at the height of the 1996 hit’s popularity.

More recently, Everett has calmed down and settled in with his favorite bandmates, foregoing the rotating lineup that used to characterize his tours. While still moving forward, E and Co. sound cozy on the darkly tinged, optimistic jams fans have come to love.

Ahead of their Feb. 15 show at the Fonda, we caught up with Everett to find out what’s in store for the band in 2013 — well, as much as he’s willing to spill.

New year, new album. Your single, “Peach Blossom” off of Wonderful, Glorious, holds up with past albums in the offbeat optimism department. How does the tone for this collection line up with your past releases?

To me the last part of those three albums, Tomorrow Morning, was the promise of positivity, and this new one is delivering on that promise. I think it’s genuinely and generally optimistic, but you gotta paint all sides of the story to get to an optimistic place. It starts out in a darker place in the name of getting to a brighter place by the end of it.

Can Eels loyalists expect the same lineup as on past tours?

It’s gonna be the same band that I’ve had for the last two world tours. Historically, I’ve changed up the personnel of the band pretty radically from year to year. If you look at a lot of bands that have the same members every time, they tend to make what sounds like the same album over and over again. You’re limited by the imaginations of all the members of the band.

One of the great examples that breaks that rule is The Beatles. That was a marriage of four guys with seemingly boundless imaginations. As for us, we’re too busy mixing it up amongst ourselves to feel the need to mix it up with different people.

Last year was a bit of a break after a hectic period in 2009 and 2010. You released three separate albums (Hombre Lobo, End Times, and Tomorrow Morning) and followed up with a world tour. Now that you’re back on the scene, is 2013 shaping up to be just as full-throttle?

Things are definitely setting up to be insane for a while. But it’s hard for me to see past what happens after this. I’m just trying to plot — get through all this and make this work.

Yeah, one minute at a time.

Can you give us an idea of what fans can expect this time around?

Well, I don’t actually know yet. And also, I wouldn’t want to tell anybody ahead of time. That’s the best part, not knowing what to expect. The shows I still remember are the shows that surprised me in some way or another.

Let me put that to you another way: What’s the best possible thing you could hear coming out of fans’ mouths as they leave the show?

I would just like to hear someone say, “Damn, I need some more of that.” Our last show on the last tour was in L.A. at the El Rey, and it was just like a magical night — the best crowd, and we were firing on all cylinders. It’s gonna be fun to start here this time.