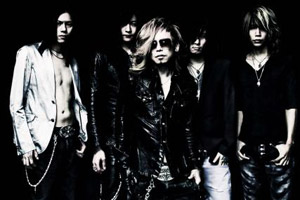 Even in a city where LA18, America’s “largest Asian TV station,” is available in six languages, a tour featuring Japanese and Finnish bands is exceptional. On September 8th, Club Nokia welcomed Dir en grey to rock out with Apocalyptica. East, meet North.

The opening act was the six-member group Evaline from Turlock, California. Their self-described pop-punk sound turned out to be the calm before the heavy metal storm.

Up next was co-headliners Dir en grey. Once dominators of the late ‘90s visual-kei scene, Kyo (vocals), Toshiya (bass), Die (guitar), Kaoru (guitar), and Shinya (drums) are now fighting for international recognition with their evolved sound, now more modern and Westernized. Kyo half-sang and half-growled tracks like “Shokubeni.” More singing and less screaming would have made their songs more distinguishable from each other, but there was plenty of bouncing around the stage and pumping the guitars into their air. It was quite a sight to see their waif of a drummer beat the hell out of his kit.

Apocalyptica performances are like the TV show Metalocalypse, just replace the plucked instruments with bowed instruments. These professionally trained musicians gained fame in 1996 with the cover album Plays Metallica by Four Cellos. Their official line-up features the three cellists Eicca Toppinen, Perttu Kivilaakso (who looks like a pirate), and Paavo Lötjönen with drummer/upright bass player Mikko Sirén in the back. Apocalyptica still plays Metallica covers (they performed “Master of Puppets” at this show), but they also played originals compositions like “At the Gates of Manala,” off the album 7th Symphony. Lacking a permanent vocalist, the band had Finn Tipe Johnson help out on various songs. Shortly before the end of Apocalyptica’s set, Eicca brought Kyo out to sing “Bring Them to Light” (done by Joseph Duplantier of Gojira on the album).

The cries from fans nearly drowned out the introduction. When the petite, dark-haired Japanese man took his place opposite the towering cellist, their physical differences were clear, but their sounds blended into one flawless metal composition. The best part? Los Angeles was the first American city that got to see this. The tour is headed to Europe next.