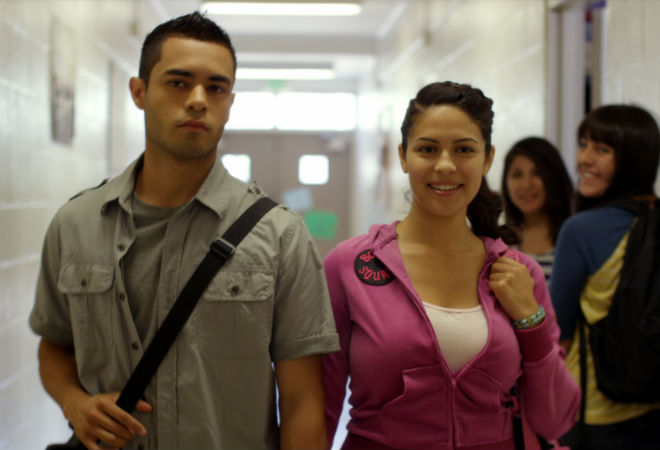 The cheating, the lying, the histrionics, watching East Los High is like being teleported back to my childhood days when I spent evening after evening watching telenovelas with my grandma (she prefers “Bibi” to the too-old-sounding “abuela”). East Los High is the sixth most watched show on Hulu. It’s also the first English-language series with an all-Latino cast on any network, generating plenty of buzz—both inside and outside of the Latino community. Creators Carlos Portugal and Kathleen Bedoya wanted to depict life in East L.A. and determined to avoid clichés, Portugal had one rule: no gardeners, no gangs, no maids.

The show follows Jessie (Janine Larina), a smart, straight-laced teenager as she navigates the quest for popularity, a divisive love triangle, her relationship with a troubled cousin, and life with her single mother. We grapple with the question: Is it groundbreaking or is treading on the same clichés?

The Cast
It’s worth recognizing that the cast of East Los High is entirely made up of Latinos; no Al-Pacino-as-Tony-Montana foolishness here. Portugal’s aim was to showcase inspiring Latino characters while creating an entertaining teen drama—similar to his work on House of Payne, where he was the only Latino writer. It’s a first in the entertainment industry, and it’s worthy of applause.
Verdict: Groundbreaking

Gritty East L.A.
“Make sure you lock all the doors, there was another break-in right next door,” Jessie’s mother says early in the pilot. Throughout the show, East L.A. is depicted as a gritty and hostile place. It’s an attempt at reality, but it feels like a cop-out. It would be great if the producers showed all of the neighborhood, including its resilience and innovation, not just its raciest and most dramatic elements.
Verdict: Cliché

Health Promotion
East Los High is the brainchild of the Population Media Center, a nonprofit organization that promotes social change through entertainment. The show is meant to serve as a PSA for young Latinos, especially when it comes to teen pregnancy. The show address the issue realistically and the overriding message is “Be responsible.” This education-meets-entertainment tactic is known as the Sabido Method. Developed in Mexico in the 1970s by Miguel Sabido, it aims to deliver social messages via serialized dramas. Kudos to that.
Verdict: Groundbreaking

Hulu Original Series
The mere fact that East Los High is on Hulu instead of a traditional network (or even a cable one) is noteworthy. The online teen drama is accessible to anyone with a computer and an internet connection. More importantly, that means producers don’t have to water down storylines or cater to the narrowly perceived demographics of most TV networks.
Verdict: Groundbreaking