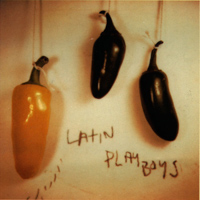 The Backstory
After wrapping up Los Lobos’ acclaimed 1992 magical-realist concept album KIKO, lead guitarist David Hidalgo sat down in his kitchen with a four-track Portastudio that was off its alignment. He began to construct hazy, half-sketched instrumentals using a boatload of wrong-sounding implements: detuned violins, eating utensils, cheapo drum machines, a guitar synth tuned to sound like blaring horns, a cello tuned to sound like a bass. Intrigued, KIKO producer Mitchell Froom played the raw demos for Warner Brothers overlord Lenny Waronker, who actually liked them.

Why You Should Listen
If Los Lobos sounded like it was stretched too thin between rowdy blues-rock, brown-eyed soul, Tex-Mex, and traditional mariachi, the Latin Playboys was a descent into full-blown experimentalism and scratchy, angular “Mexotica.” Listening to this album is like standing on a corner in East L.A. and absorbing the sounds emanating from car radios while tripping on hallucinogenic mushrooms.

Local Color
Much of the album’s dense atmospherics came thanks to Froom, who took a backseat to his ambitious young engineer Tchad Blake, an avid sound archivist. (Growing up in Southern California, Blake would venture out to capture the area’s “natural sounds,” which in the Big Orange meant a beguiling mix of coyote yips and car brakes.) For “Rudy’s Party,” Blake set up two mikes on the roof of Sunset Sounds to record the city while overdubs were continuing downstairs. For the woozy, lysergic bolero “Manifold de Amor,” he re-recorded Hidalgo’s cello through the manifold from a junked hooptie, achieving the sonic equivalent of a time-lapse film. David Chase was sufficiently intrigued to include the latter in an episode of The Sopranos.

The Aftermath
The band that made a mint with their cover of Richie Valens’s “La Bamba” gave no indication it would become the musical equivalent of Gabriel García-Marquez. Many critics were stunned by the audaciousness of the record. Greg Kot of the Chicago Tribune referred to the group as “tour guides to some mystical barrio, finding a strange beauty, a cockeyed sensuality that suggested the soundtrack for a twisted south-of-the-border documentary by David Lynch.” Fan reactions—ranging from baffled to ecstatic—seemed to ensure the album would achieve “cult” status. The Latin Playboys reconvened in 1999 for a follow-up album Dose and a U.S. tour, but the band never recorded another album.

Signature Tracks
“Crayon Sun” – A hushed and moving song about rejection and pride with Hidalgo’s distorted vocals floating in from some pirate-radio “border blaster.”

“Forever Night Shades Mary” – A jazzy etude that closes the album on a mellow vibe, it is probably the band’s best known song since finding its way into the film Desperado and the finale ofem style=”line-height: 1.4;”>Northern Exposure.

Read Them All
The United Sounds of Los Angeles #1: David + David – Boomtown