Home Art How a Malibu Man Turns a Downtown Building Into a Massive Musical... 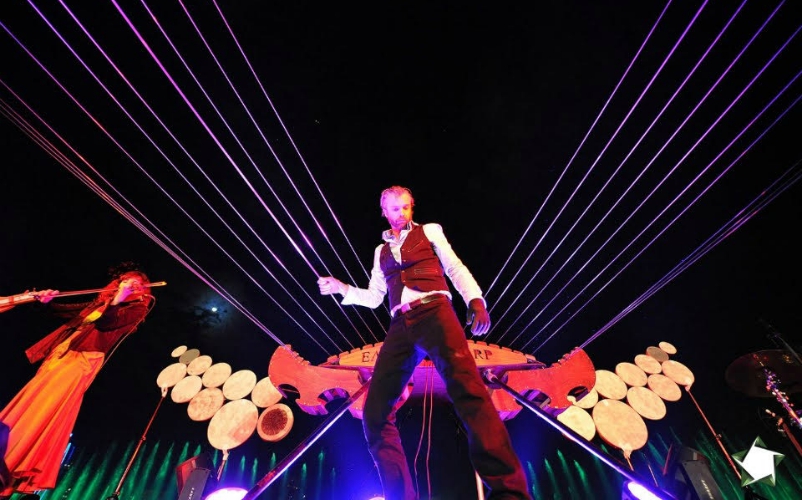 The strip of Broadway between 1st and Olympic is home to many historic theaters, and on Saturday, January 27, the area is hosting a free arts and musical festival from 3 p.m. to midnight. This year, Night on Broadway will celebrate the 10th anniversary of Councilmember José Huizar’s Bringing Back Broadway initiative with live performances in six theaters and on four outdoor stages. The B-52s are headlining, and the event will include all sorts of entertainment, including an LGBTQ+ block party hosted by DTLA PROUD, a lowrider car show, a seven-story Ferris Wheel, the Los Angeles Derby Dolls, Two Bit Circus, the mariachi/heavy metal band Metalachi, a silent disco, several large-scale art installations, and a technology zone offering virtual reality experiences.

At the center of it all, one performer will be hard to miss. William Close will be playing a 12-story stringed instrument known as the Earth Harp. Close and his Earth Harp Collective first performed at Night on Broadway last year, and this year, they will once again transform the Beaux Art State Theatre tower into a massive harp.

Close invented the Earth Harp around the turn of the millennium. He says, “I come from an architecture, music, and sculpture background, but I also grew up I sailboats, so I understand rigging really well.” The larger-than-life harp was a natural extension of his talents. For the first performance, he strung a canyon, turning the earth itself into a harp, and giving the Earth Harp its name. “In a way, the very first Earth Harp was an environmental statement that turned out to be a great sounding instrument,” says Close. Since then, he has constructed versions of the Earth Harp all over the world by stringing everything from mountainsides to skyscrapers, tuning the strings, and using them to create music. The results are stunning, both visually and aurally, and have earned Close international acclaim. He finished third on the seventh season of America’s Got Talent, set the Guinness World Record for the longest stringed instrument, and recently completed a residency at the Kennedy Center in Washington, D.C.

Close plans to build the harp for his upcoming DTLA performance the night before the event. He says, “It takes about five hours to install. I’m usually up on the roof, doing the rigging up top. Basically, we lower the musical string from above. We lower it down to the ground, and I have a team down there that takes the strings over and attaches them into the bridge, or the resonator, which is what’s resting on the stage. The strings are about 300 feet in that installation. Then, once all the strings are tight, I go up in a very tall lift—a cherry picker type of thing. For each string, I attach—I call it a tuning block, but it’s like a capo on a guitar. What it does is adjust the length of the string.” Once the harp is tuned, he plays it by wearing gloves covered in violin rosin and moving his hands along the strings.

Performing at Night on Broadway holds special meaning for Close, who lives in Malibu. He says, “It’s important to me to share what I do with my community. I get to do it all over the world, and have some amazing experiences, but a lot of times, artists don’t get to perform for their own community a lot. For me, in a way, it’s a coming home.”

Where is the Earth Harp headed next? Close says, “I am in the process of developing what we refer to as The Skyscraper Tour, which is basically projects in cities around the world where the Earth Harp is attached to a skyscraper. It’s a celebration of the city and the architecture and the people in the city.” He expects that tour to kick off in the fall of 2019.

At Night on Broadway, the Earth Harp will be set up at the intersection of Broadway and 7th Street. Close will play live every hour on the hour for approximately twenty minutes. Visit nightonbroadway.la for the full schedule of free events.

RELATED: On Free Museums Day, Make Sure to Snag These Freebies and Deals

Night on Broadway Is off for 2019. Could This Monthly Series Fill the Void?

Take a Look at the Crazy, Colorful Scene at Night on Broadway