Home comedy This Historic Theater Will Be Reborn as a New Hub for L.A.... 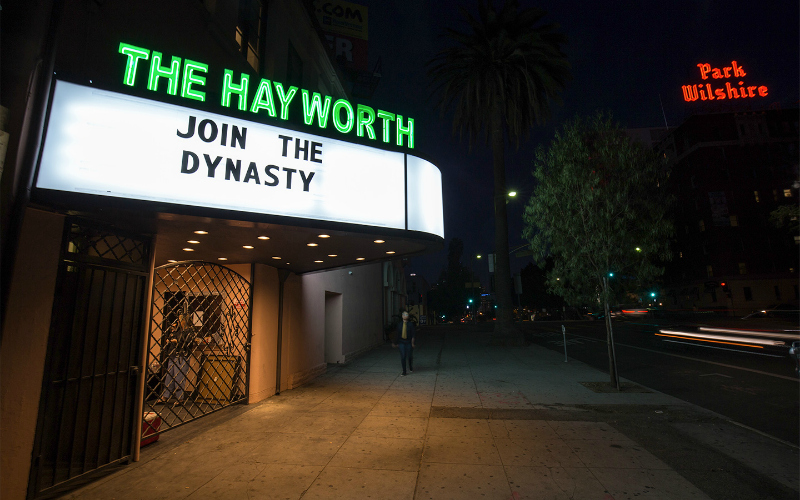 The comedy constellation in L.A. will soon be getting a shiny new star, when Dynasty Typewriter opens its doors. The new venue for live comedy, variety shows, and film screenings is taking over the historic Hayworth Theater in Westlake, helmed by comedy scene stalwart Jamie Flam.

Flam, a comedian himself and, until recently, the artistic director of the Hollywood Improv, hopes the restored 200-seat theater will fill a niche that isn’t quite being served, somewhere in between the traditional stand-up clubs on the Sunset Strip and the network of indie performance spaces that host quirkier acts.

“Comedy has evolved considerably in the last few years,” Flam says. “With podcasting and streaming, fans have far more intimate relations with artists than ever before. They are more in tune with the process behind creating comedy, which opens the door for savvy audiences to interact with talent in new ways. I want this to be a place where comedians and other artists can experiment with new immersive show formats, do engaging live podcasts, and also have the opportunity to bring more production and theatricality to their acts. And of course there will be stand-up shows as well, but by focusing on curation, and building a new theater-going experience for our artists and audience, we are bringing something fresh to a classic show format.”

If all goes to plan—and a Kickstarter that launched yesterday meets its goals—the theater will soft open in December with an initial phase of programming, followed by a full-scale launch in March, 2018. Once fully operational, the goal is to book performances seven nights a week, plus a range of daytime events including workshops and screenings. While the space will open without a bar, they plan to get a license about six months down the line, and until then, comedy-goers can stop into the adjacent La Fonda de Los Camperos bar and restaurant with which Dynasty Typewriter will share a patio area, perfect for pre- or post-show drinks and food.

As for the acts that will be taking the stage, Flam is aiming for a mix of marquee-names and more underground and emerging comics. “I tend to like weirder sometimes more experimental acts, but also have deep respect for many seasoned ‘club’ comics who know how to work any room,” he says. “It’s finding that perfect mix that can keeps an audience engaged and open to taking a ride with unexpected turns. We anticipate that we’ll be hosting some of the biggest names in comedy on a nightly basis, but we’ll also be carving out places in the schedule where we can develop and nurture emerging talent as well.”

Back in the Hayworth Theater’s heyday in the 1920s, Westlake and MacArthur Park was called the “Champs-Elysees of Los Angeles.” While the neighborhood has shifted over time, it seems to be on the verge of a new chapter. Dynasty Typewriter (a name and fictional backstory meant to evoke the building’s bygone days) will be the area’s only nightly live-performance space. The structure was bought in 2014 by Weeds and Orange is the New Black co-creator Jenji Kohan, who maintains offices on the upper floors and oversaw the restoration efforts for the vintage theater space. “Westlake is the densest neighborhood in Los Angeles, and filled with tremendous history and culture. We are excited to embrace the local community, and bring something innovative to a stunning part of the city,” Flam says, adding that “A lot of talent will be excited that they won’t have to travel to the Westside or Hollywood every night to do a professional show.”

RELATED: A Magnificent New Magic Club Is About to Appear in Los Angeles