Home Uncategorized Dwight Yoakam at the Grammy Museum – Everything From You Never Know... 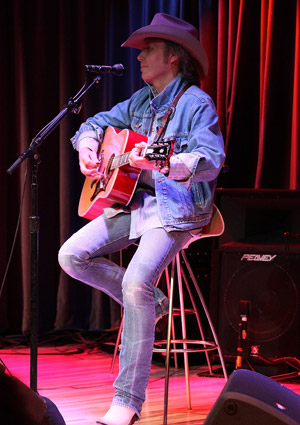 Dwight Yoakam showed up at the Grammy Museum the other night dressed in his signature cowboy hat and comfortable blue jean jacket. His demeanor and storytelling were just that—comfortable. And funny.  In what he called a “completely untethered night” before an audience of about 200 friends and fans, Dwight spoke on varied topics from guitar aesthetics to Billy Bob Thornton to Captain Kangaroo. To him, music is an expression of freedom, a free expression of emotion, “because sometimes it’s hard speaking for myself.”

He didn’t have much trouble doing that on this particular night, part of the Grammy Museum’s multi-event campaign to engage with L.A. music fans (and in the process, gain support for the six-month old museum).  Dwight rambled on charmingly about his early musical influences, childhood memories of country songs on the car radio, and his mother’s Columbia record club. He spoke strongly of his support for a music museum here in Los Angeles, and how happy he was when he heard the Grammy museum was opening. Above all he paid homage to those who came before him, naming everyone from Buck Owens to Elvis Presley, Buddy Holly, Flatt & Scruggs, Ricky Nelson, Johnny Cash, and Merle Haggard as musicians he feels strongly about. In particular he spoke of Owens being the godfather of country rock (we know, people hate that term) because he was a California guy who in turn influenced other California guys like Chris Hillman (of The Byrds and The Flying Burrito Brothers).

Then Dwight got out an acoustic guitar and was joined onstage by Eddie Perez on electric and Jonathan Clark on bass for a 50-minute set. “Let’s see if I can’t torture a Gibson”, he said before breaking into several of his own songs and several covers, including a version of Warren Zevon’s “Carmelita,” with a scattered interlude in the middle (Was it Linda Ronstadt’s version that had Smith Corona instead of Smith & Wesson?)

In the end, there wasn’t much “Q” in the “Q&A:” Dwight only ended up answering two questions from the audience. Thankfully, he made a little time for us on the phone the next day.

What have you been up to lately?
I’m in the midst of deciding where and how we’re going to do my next studio album. I just finished a movie, The Provinces of Night, with Val Kilmer, Kris Kristofferson, Reece Thompson, and Hillary Duff. Great script adapted by W. Earl Brown who you might know from Deadwood.  I did another movie also with Kris— all these years and we’ve never acted together and in the last eight months we did two. It’s The Last Rites of Ransom Pride and that also stars Lizzy Caplan, Jon Foster, and Scott Speedman. There are a couple of other film things in the works. In the meantime I’m doing a few isolated shows.

You seem to be playing a lot of little towns in Louisiana, Oklahoma, Mississippi, Texas…How did you decide on these particular places?
They’re all spots that call up and say, “Would you come play?” Little shows here and there. The band and I are feeling lucky to be among the ranks of the employed. Every coupla weeks we go out and maybe it’s a way for fans to escape some of the struggle that is ongoing right now with the entire world, the economy.

How did you promote the Grammy event last night?  Someone mentioned to me that you have a Facebook page.
Yeah there’s a Facebook and there’s a MySpace page, you know—they are offshoots of my original Web site. We have those two as a way of communicating and letting fans and folks at large speak out.

Life flashes before your eyes on YouTube. I’m amazed sometimes at what pops up. I happened to go on there to look at something last year, and it was kind of stunning that there were clips that I hadn’t seen in 20 years. The first time I was on Johnny Carson was there and my appearance with Buck on Johnny Carson on the Tonight Show when Johnny still had it but Jay was guest hosting. That’s the upside of YouTube.

Anything you weren’t happy to see?
Knock wood, not many. I mean there’s a lot of phone camera stuff and heads in the way, and sometimes the sound’s not great. But I’ve been okay with most stuff. I wouldn’t be surprised if there’s a cell phone moment of last night up on YouTube soon.

It was a great event, by the way.
Well you know what, it was really about the place and the community of music. It’s the beginning, you know, for the Grammy Museum. When the Grammy Museum opened last year I went, Wow. It was a comfortable setting, I like to be able to cut up a bit like that. It was a great space and place to be left to my own devices, which is sometimes a bit tangential and somewhat mercurially reckless. I had fun. I hope everyone did.

I’d like to ask you about the covers that you do. People must be honored when you cover their songs.
I hope so.

I am sure Cheap Trick was thrilled when you covered “I Want You to Want Me.”
We’ve talked about me jumping up with them at a couple different gigs, but I haven’t been able to pull it off.

How do you choose the songs you cover? Were you a Cheap Trick fan, for example, or were you just looking for iconic songs?
You know, I’m a song fan. I’ve been a track fan. Did I have every Cheap Trick album? No. But I always loved “I Want You to Want Me” and I used to sing it and thought, Man there’s a way to do this for me. I think there’s this wonderful opportunity that I have to express my being a fan of other people’s music, like last night with Warren [Zevon]. That’s special because he was a friend, but we became friends because I covered one of his songs. Jimmy Webb and I bumped into each other during Grammy week at Clive Davis’ party, and after discussing a cover that I’ve done, we have now talked about co-writing together. It’s always that the greater pleasure and honor is mine. I hope I do justice to whoever’s material I have undertaken.

Has anyone ever covered you in a way that you really loved?
Just being covered is flattering. I had never had one of my songs recorded that I’m aware of other than a Swedish band early in my career. In Swedish! In a Scandanavian tongue, recorded, covered “Guitars & Cadillacs,” and the only words that came out in English were “guitars and cadillacs.” That was like, Wow, man. But post that, nothing until— and I was really flattered that he would— Kenny Chesney. He put “Wild Ride” on his album. And then Raul Malo flattered me to no end by covering “Pocket of a Clown.”

What are you listening to right now?
What’s in my CD player in the car is the Byrds. It’s a compilation, the box set that came out about a year ago [There is a Season]. It had a great DVD with it— that was the thing that I flipped over. Love the Byrds and Chris Hillman.  I had written the forward for a book on the Burrito Brothers and again, I hope I did justice to it.  My iPod has got 23,000 different songs—everything from you never know to what’s next. Love Green Day. Billie Joe Armstrong is so wonderful about capturing melodic hooks that are a part of the pop music tapestry. I mean that with Billie Joe’s writing I always hear melodic moments that sound, the first time I hear them, familiar. I heard Alice Cooper talking about songwriting one time and he said a great hit song is one that you think you know by the time it gets to the first verse and halfway through the first chorus. Billie Joe actually does it.

You mentioned Clarence White last night.  What’s his significance for you?
Actually, Chris Hillman needs to get the credit he is due. He brought Clarence White into the Byrds pre B-bender, pre Sweetheart of the Rodeo. Chris said, “I’m not promoting my own song, but listen to Clarence and his playing on Younger than Yesterday.” Chris brings him in and he plays brilliant stuff on the song “Time Between.” Check that out. It’s really great.

When can we look for a new CD?
Don’t know. We are really in the midst of sorting out how and where we’ll do it. And again the paradigm has shifted so dramatically, even since I put out Dwight Sings Buck in late ‘07. I really believe that ultimately in the next coupla years, streaming is going to shift the paradigm again. I think you’ll have downloading and I think you’ll have CD’s selling like vinyl used to, but I think Smartphones are going to change everything. It’ll be interesting to see again how we are able to engage in the commerce of music. So I don’t know. I’m writing and getting ready.  I’m writing thoughts that I have musically, when they occur and getting excited. Like I said last night, I want it to be fun again, want to feel young again.