Home Arts & Events How an Adorable, Grinning Dumpster Fire Became a Symbol for 2020 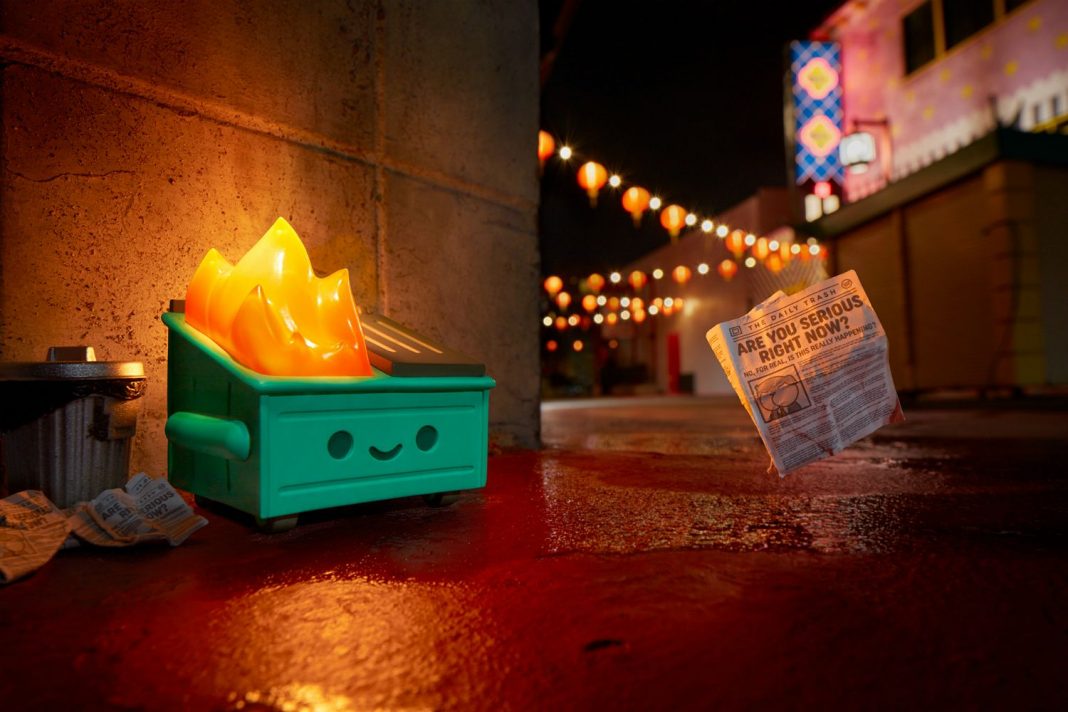 For Truck Torrence, the Koreatown-based artist behind cute pop-culture brand 100% Soft, 2020 has been a succession of dumpster fires—in the most adorable way possible. Last year, well before the horrors of 2020 were known to the world, he turned his popular character—a teal, anthropomorphic trash bin with flames shooting out of its top and a little, contented smile on its face—into a collectible toy.

Later came a purple-and-pink variant that was exclusive to Little Tokyo boutique JapanLA. Then there was the Dumpster Fire with the removable face mask that went up for pre-orders in July, a clown-face version that came out during election week, and an icy winter trash bin for the stuck-at-home holidays that comes in a package asking, “Is this over yet? 2021 better not be pulling the same shit.”

In between, 100% Soft’s Dumpster Fire designer toy was released in variety of colors and patterns, some as collaborations with brands like Hot Topic, Kid Robot, and Entertainment Earth. Torrence produced a limited edition golden Dumpster Fire that he gives to super fans, like the girl who has his four-year-old character tattooed on her leg. Meanwhile, he’s seen an uptick in sales for other Dumpster Fire merch, like pins and patches. A gif of the character, which has over 437 million views made GIPHY’s most viewed list this year.

“I’ve always had this kind of stuff,” Torrence says via video call. “But, in the past year, it’s captured the zeitgeist a little bit.”

About a decade ago, Torrence, then primarily a graphic designer, launched 100% Soft as an outlet for his personal creative work. Music, food, and internet culture have all been fodder for the brand. Torrence created a line of characters called Kaiju Kitties, a fusion of his love of cats and Japanese monster flicks. He’s shown his work at venues like Gallery1988, sold his products at numerous conventions, and has worked on Marvel and Star Wars projects.

“When the toilet paper was running out, people were buying toilet paper pins and patches from me. It felt very strange to be fulfilling the need for something, but not really.”

With 100% Soft, Torrence embraces a simple and disarmingly cute style that belies some of the darker themes in his work. It’s a juxtaposition that resonates with the gif-reacting, meme-sharing world of social media and is particularly appropriate in 2020. His pins with sayings like “dead inside” and “garbage person” often appeal to the crowd that buys Dumpter Fire merchandise. A toilet paper character that he had previously created became a hot seller at the beginning of the pandemic. “What was funny is that when the toilet paper was running out in Los Angeles, people were buying toilet paper pins and patches from me,” says Torrence. “It just felt very strange to be fulfilling the need for something, but not really.”

His smiley-faced Dumpster Fire came to life in 2016 as a gif made to reflect the news Torrence was reading and the amount of time he spent on Twitter. When he responded to news with that gif, people shared it. So, he released a pin, which started selling in quantities of ten, 20, even 30 at a time. Torrence corresponded with one person who placed a large Dumpster Fire order and learned that it was for a tech company working a project that had gone awry.

Last year, Torrence launched the Dumpster Fire toy as a limited-edition, resin figure at San Diego Comic-Con. When the exhibit hall opened on the convention’s preview night, he saw a glut of people racing through the aisles. It was a typical sight for the first night of the behemoth fan convention, one that Torrence had seen in years past. This time, though, the crowd was heading for his ten-foot-by-ten-foot booth. The Dumpster Fire had gone convention viral. The following week, he found 3D printed bootlegs of the figure online.

Not long after that, Ben Shapiro’s right-wing website the Daily Wire appropriated the image for a T-shirt, calling the character Dumpy the Democratic Dumpster Fire. A backlash ensued, bringing celebrities like Patton Oswalt to the defense of 100% Soft, and ultimately saving Torrence’s character from suffering a Pepe the Frog sort of fate.

You guys stole this image from @100soft. You’re profiting from someone else’s labor and creativity. VERY on-brand for you ghouls.

In the meantime, everyone please visit https://t.co/eiemWcZdVe and buy lots of stuff. This guy’s work is amazing. Thank you. https://t.co/QNyPooabzk

Instead, the Dumpster Fire has become a symbol of our times—and its popularity grew as the world grew bleaker. Torrence has channeled that energy into new iterations of the character, using the toy as a way of commenting on society. The masked Dumpster Fire became one of his best sellers. “It’s kind of hard to argue with the significance of it,” he says of the variant.

The clown variant, called The Amazing Dumpo Clown, is a nod to Torrence’s assistant and her interest in clowns. But, he adds, its release during election week turned out to be apt. “At the time, you couldn’t ask for a more ridiculous scenario,” he says. The figure comes in a box marked by a flyer that reads “Never Ending Nightmare Circus 2020.”

Even if 2021 is less of a burning heap of trash than this year, the 100% Soft Dumpster Fire will live on. Torrence already has a new release planned for early 2021. Chances are, there will always be situations best described with a smiling, flaming garbage bin.

“Sometimes shit’s really bad,” says Torrence, “and you need something to make you laugh about it.”