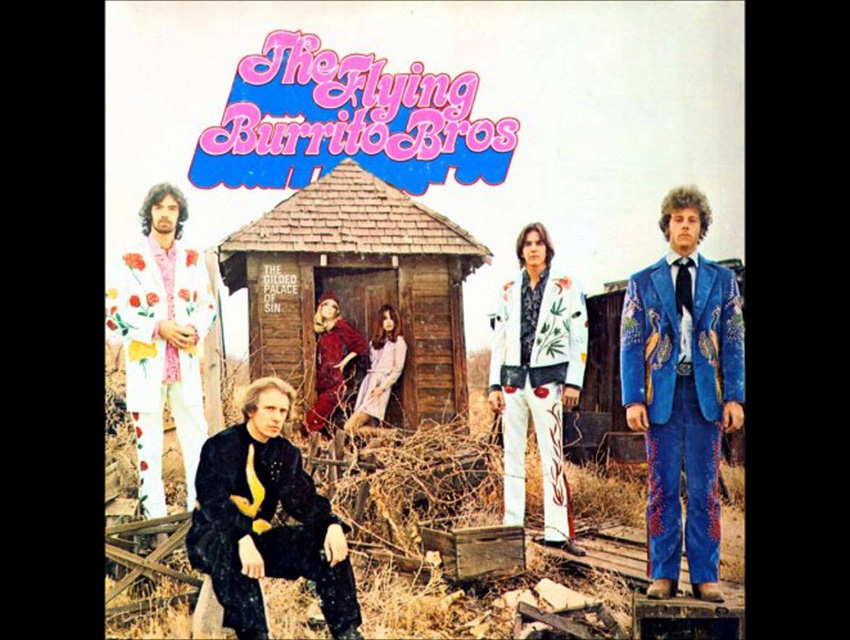 The United Sounds of Los Angeles is a series from music writer Matthew Duersten that delves into the most underappreciated, obscure, and indispensable L.A. albums.

The Backstory
In February 1968, 21-year-old Gram Parsons, a songwriter and trust fund baby from Winter Haven, Florida, met Chris Hillman, a soft-spoken guitarist and mandolinist from San Diego, while standing in a line in Beverly Hills bank. The 23-year-old Hillman was veteran of the SoCal bluegrass scene and was then playing bass for L.A. pop princes The Byrds. Hillman and Parsons bonded over their mutual love of country music and fast motorcycles, and Hillman soon brought the young upstart to the Byrds’ rehearsals. Hillman found a kindred spirit in the wilder, looser Parsons, who joined him in lobbying the band to move in a more rootsy direction. Unfortunately, after recording the pioneering Sweethearts of the Rodeo, Parsons essentially hijacked the Byrds’ debut at Nashville’s Grand Ole Opry, angering the audience, the Opry fathers, and the band.

Parsons ditched the band before a planned trip to South Africa. (His new pal Keith Richards had informed him of something called “apartheid.”) Hillman was enraged at Parsons’s irresponsibility but he had also tired of The Byrds’ stringent management. Hillman and Parsons moved into a house on a nondescript, blue-collar stretch of De Soto Avenue in Reseda, where they composed songs for their proposed band’s debut under what Hillman later called a strict “physical abuse program” of liquor, cocaine, and groupies.

The pair’s original concept, according to Hillman, was “a hip country band.” They modeled their harmonies after The Everly Brothers as well as the chummy interplay of Bakersfield honky-tonker Buck Owens and his lead guitarist Don Rich. Still, theirs was a band that only existed in the abstract. Hillman took on the role of negotiator and Parsons took on the role of charmer as they trolled for a recording contract without the benefit of any demos or even a full band. Characteristically, Parsons hijacked the new band’s name from an old one. “The Remains of the International Main Street Flying Burrito Brothers Blues Band” was a loose, ad-hoc jam collective that included Parsons and future Rolling Stones saxophonist Bobby Keys.

Parsons and Hillman also poached two musicians whom they had met through the Byrds, Mississippi bassist Chris Ethridge and “Sneaky Pete” Kleinow, a brilliant, instinctive pedal-steel guitarist from Indiana who worked as a TV animator on the Gumby and Davey and Goliath shows. With no drummer in place, A&M signed the Flying Burrito Brothers for a $20,000 advance. “I’m not quite so sure A&M saw the Burritos as the next big thing,” A&M’s “house hippie” Michael Vosse told writer John Einarson. “They thought it was a terrific band, but they were really worried about their commercial viability because there was no proven track record, no proven anything.”

It would set a bad precedent. The sessions for what would become The Gilded Palace of Sin began in November 1968 at the newly built studio on the old Charlie Chaplin film lot on La Brea Avenue but were later moved to Wally Heider’s studio on North Cahuenga. A&M staff producer Larry Marks confirmed, “there was little preparation for the Burritos sessions, with the band often learning the arrangements in the studio.” It was rare for all band members to be in the same room at the same time. There was a Spinal Tapish run of bad luck with at least four different drummers, one of whom was so drugged up he fell off his stool. During the sessions, Parson encouraged a party atmosphere, ordering champagne and oxygen tanks “to increase alertness and continue into the wee hours.” David Crosby, The Monkees’ Peter Tork, and Frank Zappa’s groupie collective The G.T.O.s dropped by to contribute ragged, out-of-tune backing vocals. Marks’s role morphed into ensuring Parsons wouldn’t disappear for days at a time. Somehow, the Burritos managed to pull it together to deliver finished tracks in early December.

Why You Should Listen
Parsons’ embryonic version of “country rock” (a term he hated) wasn’t just an updating of old-timey standards for the patchouli set but a more complicated vision of musical miscegenation, one that joined hippies with rednecks as well as black music lovers with white. Besides being the zonked blueprint for an emerging SoCal musical genre, Palace‘s true revelations are its covers of soul classics “Do Right Woman,” an Aretha Franklin hit rewired for a man’s point-of-view, and a haunting gospel take on James Carr’s “Dark End of the Street.” Instrumentally, Ethridge’s R&B-flavored bass lines assisted in this glorious deception, but it was Kleinow’s primitivist take on a notoriously difficult instrument that made the pedal-steel cool for a generation of nonconformist freaks. Even Parsons was unnerved by Kleinow’s unorthodoxies, admitting later in an interview, “There were times during the first album when I wanted to quit because I couldn’t understand this guy.”

The Aftermath
The Gilded Palace of Sin was dead on arrival, reaching a dismal #164 on the Billboard 200 and selling just 40,000 copies in six months. The surreal cover photo, shot in the desert near Pearblossom, was the beginning of the confusion: Who were these strange longhairs in their sequined Nudie suits emblazoned with pills, marijuana leaves, and naked women? Was the weird and turbulent music they made supposed to be funny? Even the men playing it had the same questions.

Still, some noted critics like the L.A. Times‘ Robert Hilburn and Rolling Stone‘s Stanley Booth were impressed with the album. Bob Dylan was a fan, noting that Gilded Palace “knocked me out.” Back in North Florida, a band called Mudcrutch, led by a kid from Gainesville named Thomas Earl Petty, were energized by this strange, revelatory music.

None of this helped the Burritos. Everything seemed to go wrong for the star-crossed band, self-induced or otherwise. After a disastrous residency supporting Taj Mahal at the Whisky, they developed a poisonous reputation as a live act. In February 1969, the Burritos boarded a train out of Union Station for what was supposed to be a national tour but wound up being a botched caravan of booze, drugs, nonstop poker games, cancelled concerts, and hotel decadence. They capped that volatile year at a little outdoor festival called Altamont.

Hillman, for one, became convinced that the Nudie Suits were the source of band’s curse. In 1970, he finally had enough of Parsons’s increasingly drug-sozzled behavior; he fired his co-founder and gamely carried on the Burritos brand for a few more albums. Parsons made a respectable stab at a solo career before dying of a drug overdose in Room 8 of the Joshua Tree Motel on September 19, 1973. He was 26.

Signature Tracks
“Christine’s Tune” – Parsons and Hillman’s airy harmonies and a lighter-than-butter skiffle beat propel this nasty takedown of a “devil in disguise” (purportedly David Crosby’s girlfriend). The song’s true glory comes courtesy of Kleinow’s pedal-steel. Fed through a crude fuzz-tone, it approaches the sound of (pick one): an alien landscaping tool? A pinball machine dipped in LSD? A prairie Theremin?

“Sin City” – This apocalyptic, Southern Baptist barroom lament has mistakenly been thought to be about Vegas. It was actually inspired by the sleazy machinations of ex-Byrds manager Larry Spector, who literally lived in a grim, low-rent L.A. condo, as the chorus goes, “on the 31st floor [behind] a gold-plated door.”

“Hot Burrito #1” – Ethridge and Parsons collaborated on this impassioned (if terribly titled) weeper. It was later re-recorded by Elvis Costello as “I’m Your Toy” for his country-covers record Almost Blue and is considered the finest showcase for Parsons affecting, fragile vocals.