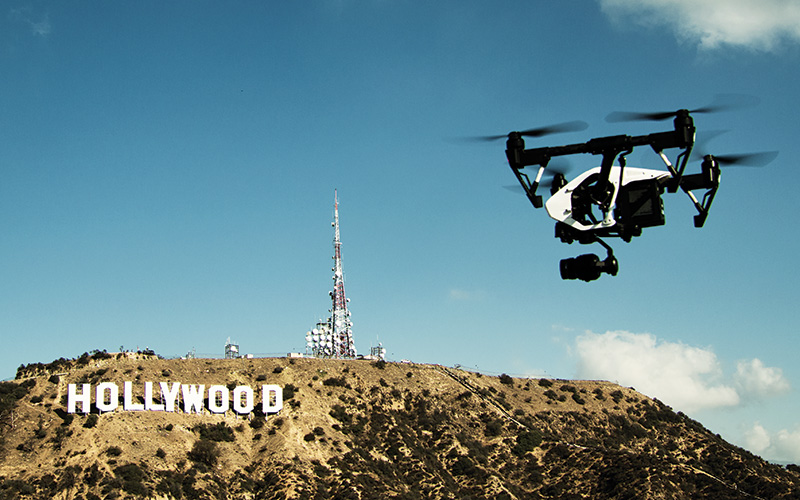 Firefighters were especially aggravated because the incident came only days after uninvited drones had hampered efforts to control the Sand Fire raging in Santa Clarita and less than two weeks after a hobbyist was arrested for flying a drone over the massive Trailhead Fire near Sacramento. As it happened, no aerial water drops were required in Eagle Rock, and the fire was contained to a mere quarter acre. But the incident inspired fresh calls for regulations to protect Angelenos from the perceived dangers posed by drones. With its well-documented sensitivity to privacy rights, Southern California is fertile ground for the movement to keep unmanned and remotely piloted aerial vehicles on a shorter leash. In the past two years Assemblyman Mike Gatto of Glendale has introduced two bills designed to impose stringent statewide restrictions on drones. (Both were vetoed by Governor Jerry Brown, but the first was later signed into law.)

The Stop LAPD Spying Coalition has petitioned Mayor Eric Garcetti to ban police drones, citing fears about public safety and illegal surveillance. (The LAPD inherited two drones from the Seattle Police Department, though they aren’t used.) And Hermosa Beach recently adopted one of the most draconian codes in the state, requiring that every drone in the city be registered and making it a crime to inadvertently use one “to harass, stalk, vex, annoy, disturb, frighten, intimidate, injure, threaten, victimize or place in extreme mental or emotional distress any particular person.”  Even as they recognize the potential benefits of remote-controlled aircraft, many Angelenos consider drones scary, mystifying, unreliable, irritating, and hazardous, hence the inchoate desire to do something—anything—to restrict them. Until recently drones were operated only by the military or hardcore DIYers, so there’s a tendency to think of them as newfangled and unproven. But like cars at the turn of the 20th century, drones are at an inflection point, poised to become indispensable—and inescapable—tools of everyday life in Los Angeles.

More than half a million drones have been registered with the Federal Aviation Administration since December 2015, already far outpacing airplanes. Despite local restrictions and complex federal regulations, dozens of commercial drone companies have sprung up in the area—to film commercials, to monitor construction, even to survey farmland.

For decades small drones, between 0.55 and 55 pounds, were governed by a one-page FAA “advisory circular” written for model airplanes. In 2013, the FAA issued new language requiring at least a private pilot’s license to fly a drone for commercial purposes. Last year Ralph Rebaya of Lakewood became the first person to lose his license for allegedly operating a drone improperly, after he was cited for a commercial shoot near Hollywood Burbank Airport. Most drone enthusiasts believe Rebaya is being scapegoated by the FAA for a minor transgression. “They wanted to punish him,” says his attorney, D. Damon Willens. “He’s the poster child for what’s going to happen to you if you don’t follow the rules.”

Yet even as the FAA continues to pursue its case against Rebaya, the rules have changed. During the fall, an entirely new set of federal drone regulations—which no longer require a pilot’s license to fly commercially—went into effect. Although the rule book is insanely detailed, composed of 624 pages in two loose-leaf binders, it is widely thought to be a step in the right direction. “The FAA is acknowledging the fact that drones are different from manned aircraft,” Willens says.

He has a personal interest in Rebaya’s case: An attorney specializing in aviation law, Willens owns a DJI Phantom 3 Pro, one of the most popular consumer drones in the world. Costing less than $1,000, the four-rotor, 2.8-pound craft features GPS stabilization, an HD camera mounted on a rotating gimbal, and software that enables it to fly without human input. Standing with me one morning on the bluffs of Rancho Palos Verdes, he pulls it out of a hard plastic case smaller than a carry-on bag, screws on the propellers, inserts a battery, and mounts his iPhone 6 to the controller. In less than five minutes he’s got the drone in the air, and after a 30-second tutorial, he hands me the controls. Although this is my first drone flight, I’m immediately flying the Phantom about 500 feet off the coast with a bird’s-eye view of the Terranea Resort. I’d probably have trouble landing the thing by myself. (If worse came to worst, I could activate the autonomous landing program.) Still, with very little training, I could use Willens’s Phantom to snap professional-quality aerial photographs or grab dramatic pans that look like they were lifted from an overwrought Michael Bay extravaganza.

Drones have come of age since my first experience with them in 1990, when I spent a day with engineers from AeroVironment, the technology company founded by visionary Paul MacCready. They’d built a small hand-launched, remote-controlled airplane out of Kevlar and fitted it with a camera so it could be used for battlefield reconnaissance. That particular afternoon they were testing it in a park in Simi Valley. The way I remember it, they spent less time actually flying the drone than picking it up after repeated crashes. It was designated the FQM-151 Pointer, and a few dozen of them were sold to the U.S. Army and Marine Corps, while several saw action during Operation Desert Storm. From this acorn grew a huge inventory of multimillion-dollar military drones that can loiter for hours at 50,000 feet or rain down Hellfire missiles on distant terrorists. These “systems”—some of them the size of manned airplanes—require large support teams with cutting-edge computers and electronics at their disposal.  Civilian drones are much smaller, cheaper, and simpler than their military counterparts. But in some respects, they’re no less impressive. Drew Roberts and Katee Laine were studying photography at ArtCenter College of Design in Pasadena when they realized that the old-school techniques they were learning had been rendered obsolete by this new technology. “We saw people using drones to come up with shots that had never been seen before,” Roberts says. “So we said, ‘That is the future.’ ”

In 2013, the two of them founded Wild Rabbit and shopped themselves to film, television, and advertising production companies. Initially Roberts and Laine struggled to land paying gigs. Most directors were skeptical of drones, and the bolder ones often overestimated their capabilities. Wild Rabbit experimented with everything from so-called heavy-lift drones, able to carry motion picture-quality cameras, to smaller craft designed for lighter loads. The company eventually settled on a three-man crew—typically Roberts flying the drone, Laine operating the camera, and a third person serving as a visual observer and drone technician. They’ve now done so many shoots that Roberts can hardly remember all the clients.

Low-level tracking shots in car commercials, cityscapes in feature films, aerial views on news broadcasts, overhead shots of big-wave surfers, bargain-basement indie productions, cost-no-object boondoggles—all of them now rely on drones. “We’re not a 100 percent replacement for a helicopter or a crane or a dolly,” Roberts says. “But we can get shots that you can’t get any other way, and we can get them at a lower budget and in real time that would otherwise take a whole team of visual special-effects artists to create.”

Comparatively inexpensive aerial footage is also changing the way real estate agents market properties, whether palatial estates in Beverly Hills, starter homes in Echo Park, or condos in downtown L.A. “It’s not like every buyer needs a drone video, but you don’t want to alienate anybody because they feel you weren’t selling them hard enough,” says Coldwell Banker realtor David Brundige. He’s so bullish on drones that he formed a company last year, DroneMyListing.com, with a former airline pilot.

Kanin Howell, a longtime stuntman who was yanked by cable off the back of a horse in Dances with Wolves when he was eight, has used his Hollywood contacts to secure lucrative drone jobs in movies and TV. Still, real estate photography remains a core component of his L.A.-based company, Drone 55. He specializes in creating 360-degree panoramic views of high-rises and urban skylines and shooting ultra-high-resolution photos that are stitched into enormous images—some as long as 75 feet—for lobby art and presentations.

Like other commercial drone operators, Howell sees a lucrative future in more prosaic work, from inspecting pipelines to charting progress at construction sites. Small drones built by companies such as AeroVironment are being used increasingly by law enforcement agencies and fire departments. But the holy grail in the industry remains home delivery. The new Ten50 condo tower in downtown L.A. even features a small landing pad for delivery drones, and Amazon is testing its Prime Air system in the United Kingdom.

Before the app can go live, though, the technology will have to become a lot more robust. (Remember, a 99 percent safety record means that 1 out of every 100 drones would be crashing onto baby strollers, into freeway traffic, etcetera.) Delivery drones also would have to navigate issues involving trespassing, property rights, and invasion of privacy, not to mention irate homeowners armed with shotguns.

But Howell isn’t fazed. “In ten years everything’s going to be automated, and drones are going to be flying over our heads, delivering things, doing whatever,” he says. “It’s going to be a completely normal thing.”