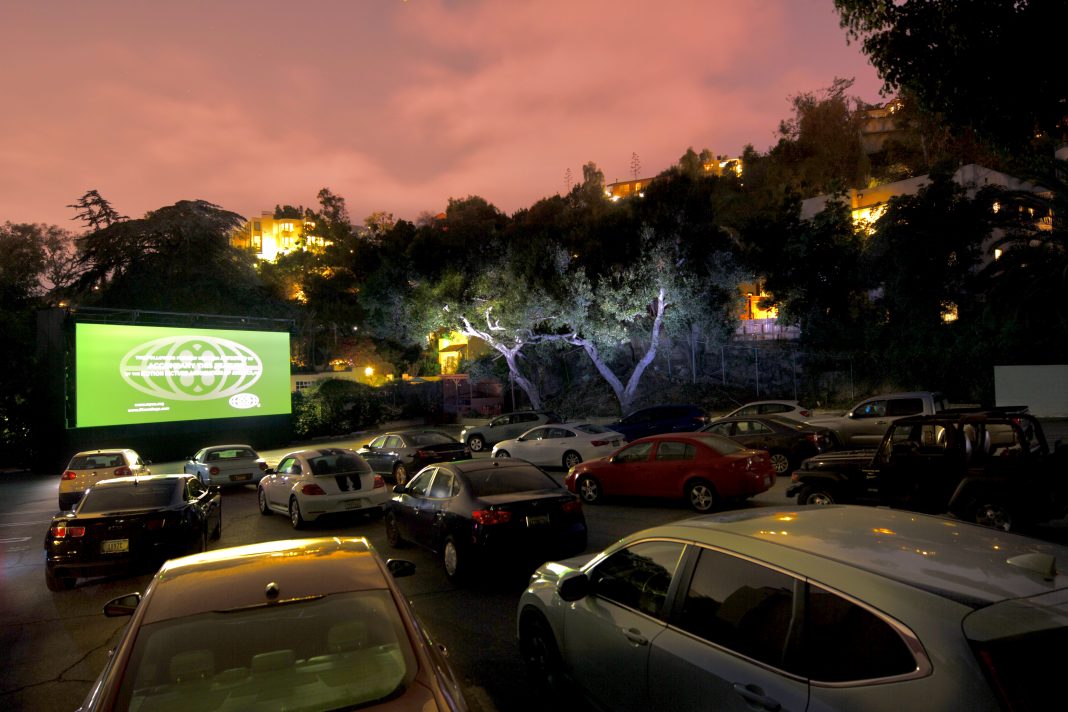 There may be a pandemic, but you don’t have to give up outdoor movies–or at least not entirely. Clever pop-up series have shifted from crowding parks with viewers on picnic blankets to setting up massive parking-lot screens inspired by classic American drive-in movie theaters. These pop-up drive-in movie series might just be the biggest entertainment events of the season.

Please check with event organizers for cancellations or schedule updates. Currently, drive-in movie theaters are allowed by both Los Angeles County and California health restrictions, but that status is subject to change.

The Drive-In at Exposition Park

Cinespia at the Greek

The ultimate authority in outdoor movies has finally popped back up in this most unusual of film-going seasons. For now, that means a three-screening run as a drive in at the parking lot of the Greek theater. Tickets cover up to four guests inside the car.

L.A.’s newest drive-in series takes over the parking lot outside a historic Sears building in Santa Monica for showings of new releases. Your ticket includes an “experience pack” with popcorn, drinks, and assigned parking; optional meals can be ordered in advance for in-car dining. Cinephiles will enjoy the high-lumen projectors that rival those used in the best indoor theaters.

Arthouse theater Arena Cinelounge is doing drive-in nights that focus on new and independent films, many of them not shown on any other big screens in town. Concessions including Arena’s popular flavored popcorn and pizzas from 800 Degrees are available for delivery to your car.

This new series at the La Cañada Thursday Club comes from Empire Lakes Productions, a new company founded during the pandemic to create social-distance-friendly events and experiences.

The Andaz hotel on the Sunset Strip has partnered for this series with YEA! Impact, a group that organizes entertainment industry professionals to work for social justice causes. In addition to film screenings, some events feature live performances; food and beverage is available to order.

American Legion Post 43 in Hollywood is establishing this 30-car drive-in with plans to show films seven days a week. The theater is set up with a state of the art 4K projection system–under the loving care of the Hollywood Legion Theater’s chief projectionist–and there are plans to screen 35mm analog film, beloved by cinephiles, in the future.

Drive-In Theatre at the Hollywood Roosevelt

Enjoy throwback film screenings at the Hollywood Roosevelt Hotel, a possibly-haunted, definitely-glam Old Hollywood hotspot. The series offers both general and VIP tickets; refreshments will be available from a converted Airstream trailer bar.

You can now enjoy dinner and a movie at Pizzeria Da Michele. Roll your car into one of their free film screenings and order food to be car-hopped right to you while you watch. Each night’s selection will be a surprise, but expect some holiday-centric and generally feel-good films. Nightly after sunset, starting December 9.

One of L.A.’s favorite pop-up drive-ins—one that predates the pandemic—is back with a new Glendale location atop the old Sears parking garage at 236 N. Central Avenue.

Weekend Drive-In at the Roadium

The 15-acre Roadium in Torrance opened in 1948 as a drive-in cinema, but by the ’80s the space was mostly used as a swap meet (specifically, the swap meet where, legend has it, a record seller introduced Eazy-E to Dr. Dre). Now the space is going back to its roots for occasional pop-up movie nights.

Pack some snacks and head out to Marina del Rey for this waterside screening series, presented by the L.A. County Department of Beaches & Harbors and staged in the parking lot of the public boat launch.

ArcLight at the Drive-In

Your favorite walk-in(?) theater chain is heading outside, hosting films at the Vineland Drive-In. Sponsored by FIJI Water, the series focuses mostly on new-release indie flicks. Some showings include appearances by cast and crew.

Poolside Dinner and a Movie at JW Marriott

You’ll be out of your car and seated on the roof pool deck of the JW Marriott at L.A. Live for this series. Tickets include a two course meal plus popcorn, full bar service is available.

Rooftop Movies at the Montalbán

This popular rooftop (non drive-in) screening series is returning for a shortened, socially-distanced season. You’ll sit in designated chairs, spaced out from other groups, and must consent to temperature reading and mask requirements–but otherwise, it’s largely the classic summer tradition you remember.

A bummer about all these pop-ups? They sell out fast. This Long Beach pop-up drive-in, which is parking itself atop the Whole Foods parking deck at the 2nd and PCH shopping center, offers stand-by tickets on a first-come, first serve basis. Note that times vary based on sunset.

Presented by Porsche, this series will take place at the Sony Pictures lot in Culver City, with space to accommodate around 75 cars per showing. Attendees will need to agree to COVID-19 safety rules and sign a waiver to participate.

The annual film festival celebrating LGBTQ+ cinema is back in a hybrid online and in-person form. Binge dozens of movies on their online Outfest Now streaming platform, and turn out for a selection of drive-in screenings at Calamigos Ranch in Malibu.

Amazon Presents A Night at the Drive-In

Curated by actor Michael B. Jordan (and featuring several of his starring roles) this Amazon-sponsored series of double-features takes place at City of Industry’s full-time drive-in movie theater, the Vineland Drive-In. Refreshments are on Amazon, all purchased from diverse-owned local businesses.

This national series has announced two SoCal locations, San Juan Capistrano and Woodland Hills, which schedule a limited run of films. Check the website for announcements of additional dates.

‘A Marvelous Night at the Drive-In’ Presented by Amazon Prime

Love Amazon Prime’s The Marvelous Mrs. Maisel? Then you’ll want to head to the Grove’s rooftop parking deck for this series, produced by Street Food Cinema and presented by Amazon Prime. Each screening night will feature episodes of the show, snacks, cupcakes, gift bags and more–and it’s all free with online registration (limit: two guests per car).

Sagebrush Cantina is offering micro-drive-in nights outside its Calabasas restaurant. In addition to a $25 pass for the car, you’ll need to spend at least $15 on food and drink from the restaurant during the show.

Not actually a drive-in series (more of a walk-up?) but we’re including here as it’s one of the very few outdoor movie options this summer that aren’t vehicle-based. In an attempt to comply with COVID protocols, a small number of guests will be able to purchase seats for these screenings, and the seats will be placed several feet apart. Additional protocols and guidelines can be found on the website. As in previous years, the series takes place on the roof at WeHo’s E.P. & L.P. and includes food and drink upgrades available for purchase.

Gather near the Malibu Country Mart at the site of Malibu’s annual Chili Cook Off for these community events on a three-story-tall screen. Online reservations are required; tickets are offered on a “donations requested” basis.

Held at Dignity Sports Arena in Carson, home of the L.A. Galaxy, this new series benefits the Boys & Girls Clubs. When you buy a ticket for your own car ($50) you can also opt to donate one to a family in need. The set-up already accommodates 200 cars, but organizers say they may be able to expand capacity soon.

The L.A. Zoo is using its ample parking lot for a family-friendly drive-in series. They’ve grouped their sections into three themes: “Hair-Raising Halloween,” “The Brilliant Betty White,” and, naturally, “Animal Adventures.” Films are accompanied by pre-show entertainment featuring videos of zoo animals and other fun add-ons. For Halloween screenings, participants are encouraged to come in costume or decorate their car for the occasion.

For the last few summers, this pop-up series was already offering the drive-in experience, so we’re happy to see they returned this year. The films are typically Valley-centric in content or filming locations. Screenings take place at the Westfield Fashion Square mall in Sherman Oaks.

Laemmle Theaters at the Roadium

Drive-In at the Park

Country music festival Tailgate Fest may not have happened in August as originally planned, but the organizers put their car-partying expertise into a new venture: a series of drive-in movie nights.

Get out of the car and sit in a distanced deck chair by the pool at this swanky Santa Monica hotel. Sunset films offer a romantic date night option or fun family outing. Tickets are free with a $25 food and drink minimum; full service from FIG Restaurant is available.

This special dinner-and-a-movie event series pairs beloved indie-leaning movies with meals crafted by top chefs. Your ticket includes admission to the film, screened on the event deck at L.A. Live, along with a three-course (plus beverage) meal for each person, overseen by Lexus Culinary Masters.

The Regency Theaters chain has opened this Van Nuys drive-in movie theater offering screenings under the stars. A full concession stand is available, orders can be placed in advance online to minimize wait time.

The Village at Westfield Topanga shopping center hosts this holiday-themed screening series, so you can can combine a movie and some gift shopping for a festive outing.

Enjoy the views from atop the garage of the Grove at these screenings. Tickets include a dinner package, with classic dishes and holiday-themed treats.

Ventura Movies In Your Car

Located at the Ventura County Fairgrounds, this series is run by the same organizers who are also using the venue for drive-in concerts from Third Eye Blind, Fitz and the Tantrums, and other acts. More showings to be announced.

American Cinematheque, normally based in Hollywood, and Beyond Fest have teamed up to curate occasional nights at the Mission Tiki Drive-In Theater located in Montclair. It might be a bit of a hike, but Cinematheque devotees probably won’t mind.

The L.A. Arts Society has always staged screenings for fellow cinephiles–they just look a little different this year. Showings are staged at the “backlot” of the indie Gardena Cinema theater; some include in-person appearances by talent.

Rooftop Cinema Club had to scrub their typical open-air screenings due to the pandemic, but they’ve come back with car-based showings at the Santa Monica Airport.

RELATED: Movie Theaters Are Still Closed, but These Drive-Ins Are Open for Business