Home Music Dreaming Up Awesome Music Videos is Just Part of the Job When... 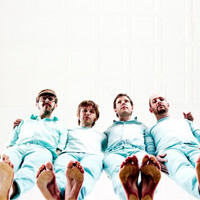 OK Go, the music world’s premier purveyor of mind-melting videos, returns this week with two L.A. shows (one at the Troubadour on Tuesday, July 22 and another at the Echo on Wednesday, July 23) in support of its new album, Hungry Ghosts, which comes out in October. Past videos have found the band members sharing the spotlight with treadmills, dancing dogs, Muppets, and a colossal Rube Goldberg machine. If the Mythbusters formed a band, it’d look like this.

In the “Needing/Getting” video the quartet rides in a car that’s playing the band’s song on pre-tuned instruments arranged along a desert obstacle course (there’s no way to explain unless you see it). The optical illusions in their latest video, “The Writing’s On The Wall,” aren’t any less stunning. But, tear your eyes away from the videos and what remains is a band with songs that manage to be both moving and catchy.

We caught up with bassist Tim Nordwind to ask how he and his bandmates dream up their off-the-wall videos and whether they’ll be the first band in space.

The new material has a different sound than your previous albums.
Yeah, it’s a little different. It’s like a modern take on nostalgia. It’s a lot more electronic than anything we’ve done in the past. There’s some live playing on it, but then we took a lot of what we recorded live and manipulated it on the computer. It’s the first record where all of us took the different pieces of music and reprocessed them all until we had something that we felt sounded big.

You’ve evolved into a multimedia band. Do you feel any pressure to outdo yourselves with each new project?
I don’t think so. In general, we’re always trying to go after ideas that seem exciting and fun. That scans the spectrum. We really love making records, we really love making videos, we really love all sorts of art projects. We love playing live. I don’t think there’s a pressure to top ourselves so much as there’s an excitement to be a 21st century band that’s allowed to chase more than just music.

Was maintaining the fluidity of those boundaries an early goal for the band?
We didn’t try to set very strict rules for ourselves in that sense. I think in the early days we were a little more self-conscious about the type of music we were allowed to write or the type of band we were allowed to be, but as we got going—maybe it’s because we tour so much and it’s from the sheer boredom of being on the road—it’s fun to do a million different things. Sometimes we’re just like, “Fuck it, let’s make up a choreographed dance we can do at the end of the show.” All of a sudden that becomes a video and all of a sudden that goes viral.

When the “Here It Goes Again” video came out, it was near the beginning of the social media tide. How important was that to you?
Yeah, that was something we got super excited about. Here’s something that cuts out any middleman when it comes to being able to share or distribute your creative ideas. We’re four guys who, whether people are paying attention or not, were making stuff all the time. This seemed like heaven. We were in the right place at the right time.

How do you keep your reputation as “the guys who make the awesome videos” from eclipsing your music?
We go at both with the same amount of spirit and fervor, I think. We spend quite a bit of time on our videos because we make our own videos. It’s not the type of project where a director pitches us an idea, a production company puts it together, and on the final day we come in and shoot it. The music and videos go hand in hand. They’re both important to us and we spend a fair amount of time on both.

What kind of band-of-the-future ideas do you have up your sleeve?
I’m not allowed to say, but we’re headed to Japan in about a week to do some research into an idea that may or may not happen. We have a whole list of ideas for videos. We just spent a fair amount of time putting together a new live show that we’re rolling out; it’s very much a multimedia experience. We’re still building that as we go.

If there’s ever going to be a band that performs in space, our money is on OK Go.
If the opportunity arises, we’ll take it!

The band was formed in Chicago but is based in L.A. now. What are you favorite spots when you’re home?
I love L.A. There will always be a place in my heart for Chicago, but L.A. is for me at the moment. I love the Griffith Park Observatory. I love Salt’s Cure; they cure all their own meats, and it’s delicious. My favorite place to see bands is the Bootleg Theater in Silver Lake. A theater that isn’t for music but does great stuff is the Bob Baker Marionette Theater in Echo Park, where they do marionette shows every morning. It’s one of the coolest things ever. And I love the Magic Castle, too. There’s so much. L.A.’s such a wonderful place to go home to, especially after being on tour.