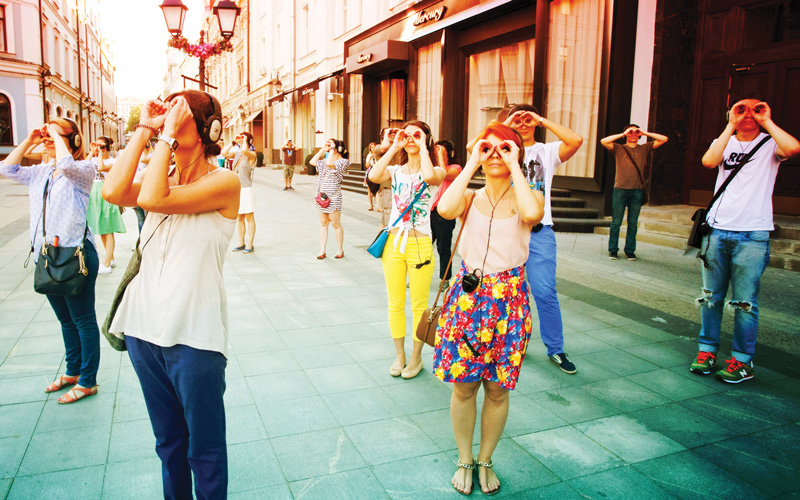 Immersive theater—in which audience members are expected to do far more than sit, watch, clap, and go home—has come a long way since Tony and Tina’s Wedding. It’s become darker (the hit New York show Sleep No More re-imagines Macbeth in a creepy old hotel) and, in the case of a lauded production heading to Los Angeles this month, deeper. From March 12 through April 2, Center Theatre Group stages German-Swiss arts collective Rimini Protokoll’s Remote X (the X changes with the name of the show’s host city—Remote Santiago, Remote Bangalore—making this incarnation Remote L.A.). Ticket holders take off from the Mark Taper Forum for a 90-minute audio-walking tour, one that may or may not involve flash mob elements and instructions to diverge from the group.

Started in 2013, Remote X examines the intersection of technology and human behavior—the show abandons a traditional narrative in favor of exploring how we connect with one another. Rimini Protokoll codirector Jörg Karrenbauer challenges audiences. “Take this,” he says. “This is also theater.” Here’s how it works: A Siri-esque voice guides 50 people at a time along a route custom-mapped for L.A. (think Her minus the weird sexual undertones). Everyone in the group, their headphones securely in place, ventures out together, perhaps being directed to hop on the Metro or enter a parking garage to see the city from a new perspective. If the production sounds nebulous and multilayered, that’s because it is—you observe but also are observed (the whole thing takes place in public, after all). As a company, “you yearn for a different way of making theater, not having your audience just be a spectator,” says Diane Rodriguez, associate artistic director of CTG. A show that exposes us to more of L.A. and helps us reach 10,000 steps? That’s a win-win.